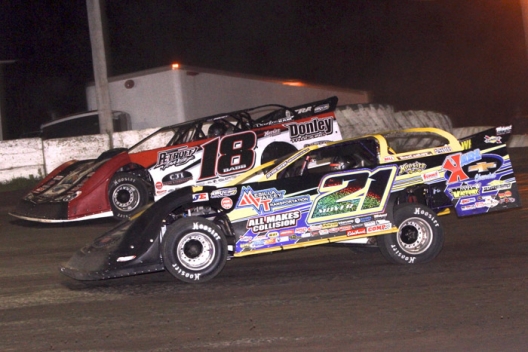 “It does get me fired up,” Babb said when asked about engaging in high-stakes racing with Moyer, a Hall of Famer who served as a mentor to Babb earlier in his career.

Babb, 44, of Moweaqua, Ill., used his burning desire to outrun Moyer to his advantage in the A-main, which he won after swapping the lead four times with his 60-year-old rival from Batesville, Ark., during a titanic clash of Summer Nationals titans that lasted more than half the race.

Moyer nosed ahead of Babb using the inside lane to lead laps 13 and 21, but on each occasion Babb surged back in front the following circuit. After Babb regained command for good on lap 22 he soon began pulling away from Moyer and ultimately beat the Hell Tour’s all-time winningest driver by 1.476 seconds for his first series triumph of 2018 and a $5,000 payday.

Brian Shirley of Chatham, Ill., who started from the pole position but was outgunned for the lead at the initial green flag by his front-row mate Babb, finished a distant third. Rusty Schlenk of McClure, Ohio, inched forward from the seventh starting spot to place fourth in his C.J. Rayburn house car and 2011 Kankakee Summer Nationals winner Mike Spatola of Manhattan, Ill., improved one position from where he started to complete the top five.

The race turned into a personal showdown between Babb and Moyer — winners of a combined 10 Summer Nationals titles and 188 features entering the night — shortly after a lap-four restart. Moyer, who started fourth, reached second place on lap two and began to pressure Babb following the second of the race’s two caution flags.

Chugging along the inside lane in his Moyer Victory Race Car while Babb kept his XR1 Rocket perched high on the third-mile oval, Moyer managed to lead laps 13 and 21 by the slimmest of margins but couldn’t wrestle full control. Babb simply turned up the wick each time, tossing his car hard around the outside of turns three and four to immediately vault back in front the next time by the start-finish line.

“He was better than me down in (turns) one and two for sure, down that backstraightaway, so I was on edge,” Babb said. “I tried to be smooth and see if it was better or faster, but at the end of the day I just had to stand on the gas and get through three and four down there. Billy made me get up on the pipe down here in three and four a couple times.”

Babb’s determined high-side drive to regain the lead on lap 22 was aided slightly by the presence of the lapped car driven by Allen Weisser of Peoria, Ill., who was racing in the bottom groove rounding turns three and four and thus hampered Moyer’s progress. Moyer managed to draw close to Babb again on lap 25, but Babb cleared a slower car the following circuit and proceeded to steadily pull away from Moyer over the remaining distance as the outside line locked down to become the preferred route around the track.

“We came up on a lapped car and it was on the bottom in Billy’s lane there,” Babb said, “and then right after that I think the top really got going. “It started getting a little bit grippier and tighter and tighter, so everybody kind of moved up. That’s kind of what I was counting on. I never did leave the top of one and two. At the beginning it was crumby, but at the end it finally came in there.”

Moyer acknowledged the role slower traffic played in relegating him to a runner-up finish.

“If them lapped cars maybe would’ve been running his line instead of mine it might’ve been a different outcome,” Moyer said. “(Babb) kind of stayed up where he was at … he tried the bottom there a little bit and I tried the top a little bit at times, but there at the end, when I had to move up, I was just too late when that rubber come. It was over then.”

Both drivers spoke in enthusiastic terms of their extended race for the lead.

“It was a heck of a good race,” said Babb, who registered his fourth overall victory of 2018. “I was looking down at Billy there for a long time. He kept inching ahead of me down the back straightaway, but he ran me super clean. He was awfully nice because he could’ve probably stuck up there in front of me and won the race.

“That’s what I told him a while ago: ‘You’re a damn nice guy because you could’ve moved up in front of me, but you didn’t.’

“But that’s what makes a good race, whenever you can change positions a couple different times and you’ve got a good battle,” he added. “Nobody ever wants to see somebody just get out and drive away.”

“It was a lot of fun,” commented Moyer, who was gunning for his third win of 2018 but first worth more than $2,000. “That’s what it’s all about is just being able to race and have fun and run each other clean.

“It don’t even get old when it’s like that. Even though we didn’t win … I’m usually a pretty sore loser, but I’m smiling tonight because it was fun. My buddy Shannon there, we go back a long ways.”

Babb, who started the Summer Nationals in frustrating fashion the previous night with a quiet 11th-place finish at Peoria (Ill.) Speedway, tallied his 93rd career win on the series. That moved him within three victories of Moyer’s all-time best total of 96.

Shirley, meanwhile, couldn’t keep pace with Babb and Moyer. He ran in third place from lap four to the finish, periodically turning back pressure from Schlenk and Spatola.

“Listen, Shannon Babb and Billy Moyer, they’re no slouches,” said Shirley, who also finished third in Peoria’s series opener. “But we were off a little bit tonight. We made the wrong judgement on where I needed to be on my right-side wheel load. I knew when we went in (the corner) trying to run that bottom, I just couldn’t get where I needed to be comfortable.

“It’s just one of those deals where you just ain’t gonna hit it every night. Racing’s an educated guess and we’ve been fortunate that we have a pretty good package, the car’s running good (this season). It’s just tough to swallow when you think third’s not very good. We needed to be a little better … third’s as good as it gets tonight.”

The race’s two caution flags were for single-car spins at the turns one and two end of the track, on lap one for Allen Murray of San Antonio, Texas, and lap four for Tony Jackson Jr. of Lebanon, Mo.

Shannon Babb pulled off a dramatic victory, passing Mike Spatola for the lead coming to the white flag after bidding for the top spot relentlessly throughout the distance. Spatola finished 0.723 of a second behind Babb in second, followed by Billy Moyer Jr., seventh-starter Timothy Culp and Jason Feger.

Frank Heckenast Jr. led from flag-to-flag, winning without a challenge. He crossed the finish line 2.179 seconds in front of Tony Jackson Jr., who overtook Allen Murray for second midway through the race.

Brian Shirley led the entire distance, keeping Billy Moyer at bay to take the checkered flag 0.227 of a second in front of the Hall of Famer. Rusty Schlenk, Gordy Gundaker and Austin Rettig completed the transfers.

Brian Shirley of Chatham, Ill., turned the overall fastest lap in the group qualifying session, circling the oval in 13.704 seconds to earn the pole position for the first heat.

Other group quick-timers were Allen Murray of San Antonio, Texas, and Shannon Babb of Moweaqua, Ill. Each will start on the pole of their respective heats.

Round 2 of the DIRTcar Summer Nationals brings an overcast day with temperatures reaching into the low 80s. … Devin Gilpin of Columbus, Ind., has his Jim Beeman-owned MasterSbilt car entered in Kankakee’s action after skipping Wednesday’s opener at Peoria (Ill.) Speedway. He said his team simply didn’t have enough time to properly prep their equipment for Peoria’s show after spending last weekend competing in the Dream XXIV at Eldora Speedway in Rossburg, Ohio. … Speaking of Eldora’s Dream, two drivers who traded some significant paint while battling for a transfer spot in a B-main on Saturday night — Nick Hoffman of Mooresville, N.C., and Tyler Bruening of Decorah, Iowa — are apparently on good terms since they’re parked side-by-side in the pit area. … Bruening failed to qualify for Peoria’s A-main due to some first-night struggles he had with a new Capital Race Car that had only previously turned a handful of test laps. The machine, which he brought out after the car he ran at Eldora couldn’t be repaired in time for the start of the Summer Nationals, was hampered by a carburetor issue. … Shannon Babb of Moweaqua, Ill., spent some time “working on my cockpit comfort” after unloading in Kankakee’s pit area. Displaying a relatively thin piece of foam that came with his seat cover, he said he was going to make it thicker to provide him more cushion. “Last year, after all the night-after-night racing (of the Summer Nationals), I had a bruised tailbone by the end,” he said. “I’m just trying to avoid that this year.” … The always loquacious veteran racer Rusty Griffaw of Festus, Mo., offered his take on Kankakee while standing in the pit sign-in line late in the afternoon: “I’m hoping for some dirt (a cushion) tonight — R.G. needs a ledge!” …Hall of Fame chassis builder C.J. Rayburn is in attendance for the second straight night, visiting with his many friends in the pit area and offering assistance to his house car driver Rusty Schlenk of McClure, Ohio.

Billy Moyer of Batesville, Ark., has won nearly one-third of the Summer Nationals races at Kankakee, claiming a record eight victories at the track. The 60-year-old, who is expected to be in tonight’s field, scored his first Hell Tour triumph at the 3/8-mile oval in 1987 and his most recent came in 2014.

Other past Summer Nationals winners at Kankakee expected on Thursday are Shannon Babb of Moweaqua, Ill., Mike Spatola of Manhattan, Ill., and Frank Heckenast Jr. of Frankfort, Ill., who recorded his first-ever Summer Nationals triumph in the 2015 event.