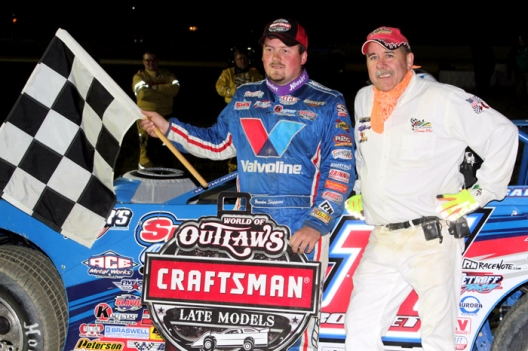 Charging around the top side of the racetrack, the fifth-starting Sheppard moved into second on lap 19 and tried to chase down Madden as the frontrunners worked their way through lapped traffic.

After a caution bunched the field, Sheppard restarted nose-to-tail behind Madden on a lap-35 restart and the top two cars came together in turns one and two as Madden spun to a halt and Sheppard motored into the lead. Sheppard led the final 15 laps for his fourth WoO victory of the season while Madden ended up 12th, trimming his series lead to 16 points.

“I obviously didn’t mean to do that to Chris,” Sheppard said in victory lane. “He had a pretty good car there and we were racing hard. He went to the middle there, where he’d been running before that restart. I really didn’t expect him to turn down that hard. I was carving around the bottom there and we just … I guess we can watch the video there. But I definitely didn’t mean to do that. But we’ll take the win. Seems like it’s been a long time coming.”

Indeed, Thursday’s win was a shot in the arm for Sheppard, who failed to qualify for Eldora Speedway’s Dream XXIV six days earlier. With the World of Outlaws tour returning to Stateline for the first time since 2013, Sheppard notched his 28th career series victory, tying Steve Francis of Bowling Green, Ky., for eighth on WoO's all-time victories list.

“We’ve definitely got a really good piece,” Sheppard said. “We’ve kind of got closer to where we were last year. It’s definitely really good still. We’ve just got to get a rhythm going again.”

Madden, meanwhile, maintained his WoO points lead after spinning out of the lead but wasn't happy with the incident that cost him dearly. When asked to comment on what happened on the track with Sheppard, Madden just quietly smiled and shook his head, decling to comment.

Local driver Darrell Bossard of Centerville, Pa., finishing second for his best career WoO finish while seventh-starting Mike Marlar of Winfield, Tenn., was third. Polesitter Rick Eckert of York, Pa., finished fourth and Devin Moran of Dresden, Ohio, advanced from the 11th starting spot to round out the top five.

“We’ve had some bad luck with this car this year but it’s been really fast,” Bossard said. “Racing with these guys is really a dream. You grow up and you get into this and you dream of racing with Mike (Marlar) and Brandon (Sheppard) and Shane (Clanton) and all those guys. I remember watching Rick Eckert when I was a kid. To drive by Rick Eckert is something I never thought that I’d ever do.”

“We just try to stay out of trouble and do the best we can do,” Marlar said. “They’ll be night’s when we have some and luckily we’ve dodged it all so far. It helped a little bit on the points lead. I hated to see them guys get together like that. But it’s slick and slow and everybody’s fighting for one little lane on that bottom. I couldn’t really tell what was going on there real good … I had a fun night.”

Notes: The national tour was competing in New York for the first time since June 18, 2015, at Fonda (N.Y.) Speedway. ... Chris Madden has led 69 of 100 laps in the last two WoO events but didn't snare a checkered flag in either race. ... After the race, Madden didn't want to comment about the lap-35 contact with Sheppard. ... Former WoO Rookie of the Year Brandon Overton of Evans, Ga., was a no-show after competing in the first dozen WoO events. Overton, who was previously ninth in series points, split with Tennessee-based Dream Racing and his racing plans are uncertain for the remainder of the season. ... Max Blair of Centervile, Pa., started 16th and finished sixth. ... Andy Boozel of Clymer, N.Y., was the highest finishing home-state driver in ninth.