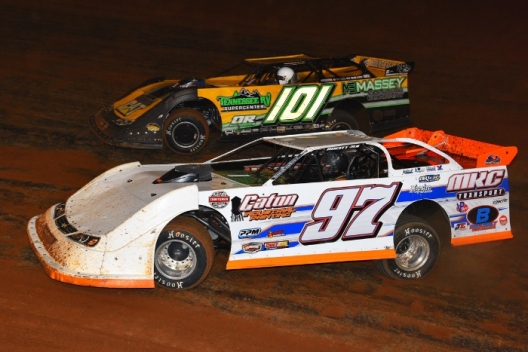 Michael Moats/mrmracing.net
Michael Chilton (97) overtook Casey Roberts (101) on the 12th lap.
What won the race: Michael Chilton of Salvisa, Ky., went under Casey Roberts exiting turn four on lap 12 and led the rest of the 40-lapper at Crossville Speedway to earn $4,000 in the Schaeffer's Spring Nationals season finale. Chilton survived late cautions to hold off runner-up Jason Jameson.
Quotable: Late in the race "I was just trying to keep my (car) under me and not doing nothing silly and not make a mistake there," winner Michael Chilton said. "I knew (runner-up Jason Jameson) got close to me there and I didn't want to open the door for an opportunity for a (slide-job pass). It kind of slows your lap times blocking for the slider, but you gotta do what you've gotta do, and we got it done tonight."
Key notes: The victory was Chilton's second Schaeffer's Spring Nationals victory of the season,and his fourth career series victory. ... After losing the second spot to Jason Jameson, Casey Roberts tangled with a lapped car and spun on the backstretch for a mid-race yellow; Roberts slowed for another late yellow. ... The event was a makeup feature from May 24 where rain arrived just after a yellow appeared at the start of the event. ... Thirteen drivers returned after 20 initially took the green flag. ... David Payne and Rusty Ballenger were added to the tail of the field.
On the move: David Payne of Murphy, N.C., started 14th and finished seventh.
Winner's sponsors: Chilton drives a Rocket Chassis with a Bullock Race Engine and is sponsored by Parkview Home Center, Caton Industrial Painting, Chilton's Lawn & Maintenance, PPM Racing Products, Brucebuilt Performance and Kamikazi Web Works.
Points chase: Eric Wells of Hazard, Ky., wrapped up the Schaeffer's Spring Nationals championship with his third-place finish.
Car count: 20
Fast qualifier: Jason Jameson
Time: 11.728 seconds
Polesitter: Casey Roberts
Heat race winners: Chicky Barton
Editor's note: Results and race details are unofficial.