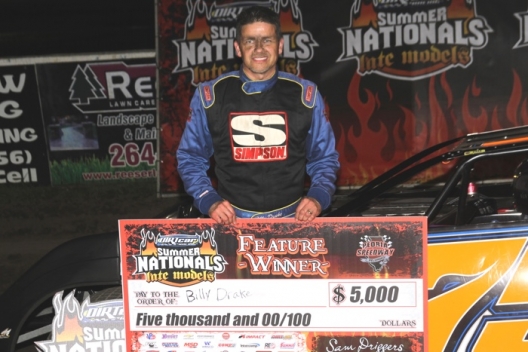 PEORIA, Ill. (June 13) — Billy Drake had a hard time believing that his $5,000 victory in Wednesday’s 40-lap DIRTcar Summer Nationals opener at Peoria Speedway was his first on the Hell Tour in nearly 15 years.

“No way, it can’t be that long,” said Drake, whose last Summer Nationals triumph came in a non-points race on Aug. 28, 2003, at Spoon River Speedway in Banner, Ill., two months after his last points-paying win on June 29, 2003, at Tri-State Speedway in Haubstadt, Ind. “I must be getting old.”

Time does indeed fly. And for Drake, ending his long absence from victory lane on the grueling circuit threw the 48-year-old driver from Bloomington, Ill., back to his days as a well-traveled, full-time racer who was one of the Dirt Late Model division’s rising stars.

Drake now competes on only a limited basis in a Pro Power Engines-equipped MB Customs machine fielded by Ray Neltner of Peoria, Ill., but the talent that gained him several major wins during the 2000s remains in him. He proved it with a flawless performance at his car owner’s hometown track, setting fast time, winning a heat race and leading the Hell Tour’s 2018 lidlifter from start-to-finish off the outside pole without facing a single serious challenge.

Polesitting former Summer Nationals champion Jason Feger was outgunned by Drake for the lead at the initial green flag and chased his fellow Bloomington resident for the entire distance. But even with five restarts, Feger was never able to draw close enough to make a significant bid for the lead and settled for the runner-up spot, 1.403 seconds behind Drake.

Fourth-starter Brian Shirley of Chatham, Ill., moved up one spot on the race’s opening lap and ran third for the duration to claim the final podium berth. Billy Moyer Jr. of Batesville, Ark., lost a position when the feature began and finished fourth while sixth-starter Brandon Thirlby of Traverse City, Mich., immediately seized fifth place and went on to complete the top five.

Drake, who sat on the sidelines for a couple years after selling his family-owned equipment before Nelttner lured him back into action in 2012, was understandably excited to finally record his 11th career Summer Nationals win. But his modesty showed through as well when he alluded to the quarter-mile oval’s racing surface taking rubber, making passing difficult.

“We’ll take ‘em any way we can get ‘em,” Drake said. “Things went right for us tonight. We were able to win that heat race, which is critical, and got on the front row (for the A-man). Then I think our car was pretty good, but the track kind of got one-lane there so we were in the right place at the right time.”

Nevertheless, Drake ran an error-free race. There were several obstacles that provided an opportunity for him to succumb to the pressure and falter down the stretch — including a length red flag on lap 35 that was displayed because the cars driven by Gordy Gundaker of St. Charles, Mo., and Mike Spatola of Manhattan, Ill., became stuck together on the homestretch — but he handled everything thrown at him with aplomb.

“They were making us sweat for it, red flags and yellows and everything else,” Drake related. “You just never know after you have those long reds … you sit there, and you never know what your stuff’s gonna do going into the next corner. Your tires could seal, you could run through some slick stuff and shove, so it’s always a little bit of a risk.”

Once Drake crossed the finish line first, he deflected the praise thrown his way to his team members.

“I’ve got to give these guys credit,” Drake said. “We’ve really worked, we’ve really studied, and we’ve really kind of analyzed all this (Dirt Late Model technology). Ray and Jimmy and Chris Mars, all those guys, a lot of thought goes into this, so I couldn’t do it without all those guys.

“Around here, that’s our big deal,” he continued, referring to the annual Summer Nationals. “It’s huge (to win one). It’s big, especially for these guys (his owner and crew) — it’s their home track. It’s special for them as well and I’m glad we could deliver here in Peoria.”

Feger, 40, conceded that Drake was the fleetest racer from Bloomington on this night, but he left Peoria with a sense of satisfaction. Second place was a positive development for Feger, who has struggled this season and was just four days removed from a qualifying crash during the Dream at Eldora Speedway in Rossburg, Ohio, that he feared had seriously damaged his XR1 Rocket car but in fact had caused relatively minor problems.

“I feel like the last two or three times out we’ve been making some pretty big gains,” Feger said. “We were good tonight. We were able to roll good in the heat race and we were pretty decent in the feature. Drake’s got a lot of laps around here, he runs here about every week, and he’s got a good car and he’s really good here so I knew he was gonna be tough.

“I’m happy with second. I can start digging out of this hole I got myself in and pay some people off and get enough money to go down the road.”

“We did the best we could do by winning our heat,” Shirley said. “Unfortunately, where the racetrack was (passing at a premium), the redraw meant a lot.

“But all in all, a top five out of the first night, that’s a big goal so that way it kind of sets the precedent for the next nights (of the Hell Tour).”

The lap-35 stoppage for the Gundaker/Spatola cleanup was one of two red flags displayed during the feature. The first came on a lap-10 restart when Allen Murray of San Antonio, Texas, spun out of sixth place between turns one and two — he said he entered the corner too hard and missed the rubber strip — to trigger a multi-car pileup that also included Tony Jackson Jr. of Lebanon, Mo., Charley Hess of Peoria, Ill., Nick Hoffman of Mooresville, N.C., and Timothy Culp of Prattsville, Ark.

Three caution flags also slowed the race. Allen Weisser of Peoria, Ill., triggered the first on lap four. Debris led to the second slowdown, on lap 10, and teenager Matt Shannon of Bartonville, Ill., slowed to bring out a caution on lap 31.

Billy Moyer Jr. had no trouble racing to a wire-to-wire triumph over Frank Heckenast Jr. Nick Hoffman and Gordy Gundaker followed in the caution-free race.

Jason Feger used the outside lane to grab the lead from Brandon Thirlby on lap four and turned back challenges from Thirlby the rest of the way to emerge victorious. Cautions flew on the original for a turn-one tangle involving Bill Kettering Jr., Matt Shannon and Robbie Bauman and on lap one for Kettering’s spin.

Brian Shirley raced unchallenged to victory over Rusty Schlenk, who finished nearly a straightaway behind the victor. Todd Bennett and Timothy Culp rounded out the transfers.

Billy Drake of Bloomington, Ill., was fastest in time trials, turning a lap of 13.505 seconds in the first group to uphold the honor of the local contingent. He has 10 career Summer Nationals victories, but his most recent came in a non-points race on Aug. 28, 2003, at Spoon River Speedway in Banner, Ill.

Brandon Thirlby of Traverse City, Mich., was quickest in Group 2 with a lap of 13.543 seconds.

Drake, Thirlby, Rusty Schlenk of McClure, Ohio, and Billy Moyer Jr. of Batesville, Ark., will start from the pole position of the four heat races.

Glen Thompson scratched from further action after breaking a transmission during hot laps.

The Summer Nationals opens its 2018 on an absolutely gorgeous day in central Illinois: clear skies and high temperatures in the low 80s. … The Peoria oval sports a new LED lighting system that was recently installed by track management. … Young New Mexico announcer Rueben Mireles is eagerly beginning his first season calling all of the Summer Nationals events. He’s joined this evening by veteran World of Outlaws Craftsman Late Model Series announcer Rick Eshelman, who will head out following Peoria’s checkered for a WoO tripleheader in New York and Ohio. … Hall of Famer Billy Moyer of Batesville, Ark., enters the Summer Nationals opener sitting four wins away from becoming the first driver to reach 100 career Hell Tour victories. He currently has the first five series events on his schedule. … Racing at his hometown track, Bob Gardner came to the track with his hauler alone. He said he’ll have friends arrive later to provide help, but he only has one crewman lined up to help through the remainder of the Hell Tour’s first week, putting his hopes of chasing the full series up in the air. … Tony Jackson Jr. of Lebanon, Mo., who has the first 11 Summer Nationals shows on his tentative schedule, is receiving pit-area assistance for at least the coming week from former Dream Racing No. 116 crewman Vinny Giuliani. Guiliani left the Crossville, Tenn.-based team along with driver Brandon Overton of Evans, Ga., on Monday. … Allen Murray of San Antonio, Texas, flew in to Peoria this afternoon to meet his team, which is housed at Randy Korte’s shop in Highland, Ill., and maintained by former Billy Moyer Jr. crewman Jason Quirion. How long will Murray stay on the road? “I might be here four or five days or you might see me at Oakshade (next month’s Hell Tour finale in Ohio),” he said with a smile. … Jason Feger of Bloomington, Ill., said he “got lucky” when he was involved in a hard crash during last weekend’s Dream at Ohio’s Eldora Speedway. “I thought it was gonna be junked,” he said of his XR1 Rocket car. “But it was mostly sheet metal.” … Timothy Culp of Prattsville, Ark., is plunging into the Summer Nationals after a rough weekend at Eldora. He isn’t running the car he bent up at Eldora this evening, but it is repaired and ready for action. … Brandon Thirlby of Traverse City, Mich., said he plans to enter the first and last weeks of the Hell Tour “unless something crazy happens.” Hearing that, one of his crew guys quipped, “If we do keep going, his crewman won’t have a job when he gets home.” … Australians Paul Stubber and Ben Nicastri are in the field. Stubber is racing with a brace on his right hand and tweaking it in an accident two weeks at Tri-City Speedway.

The 2018 UMP DIRTcar Summer Nationals — the grueling series that is scheduled to run 28 races in 32 days — kicks off Wednesday night at Peoria Speedway, a quarter-mile oval in central Illinois that is hosting the Hell Tour opener for the first time. The track’s previous earliest series appearance came in the second event in 2004.

Wednesday’s $5,000-to-win event marks the 18th time that the Summer Nationals has visited Peoria. The circuit is making an appearance at the track for the 15th consecutive year; the only season since 2000 that the Peoria wasn’t part of the Hell Tour was 2000.