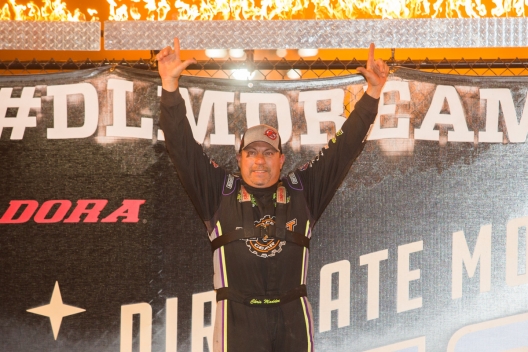 Starting on the pole of the even feature, Madden dominated all 25 laps, holding more than a straightaway lead over runner-up Shane Clanton of Zebulon, Ga., at the checkered flag. Scoring his first-ever victory at the famed Eldora Speedway, Madden earned a $10,000 payday.

“We had that first race won and it’s nobody’s fault but my own,” Madden said. “I was driving over my head a little bit there and just got too high on the racetrack and got the nose dragging into the cushion and ripped the nose off.

Pulling ahead of fellow front-row starter Ricky Weiss of Headingley, Manitoba, to take an early lead, Madden set a blistering pace over the field. As second-running Weiss attempted to fight back challenges from Clanton, Madden worked his way through lapped traffic, stretching his lead in the final laps.

“I just knew I needed to hit the lapped traffic at the right spots on the racetrack to be able to clear those guys,” Madden said. “This place you can gain a lot of ground and you can use a lot of ground. I just wanted to make sure I hit my marks right. Everything went our way.”

Moving into third in the early running, Clanton overtook Weiss just past the halfway mark, finishing second to Madden. Fifth-starting Bobby Pierce finished third, with Hudson O’Neal of Martinsville, Ind., advancing from the 10th starting spot to finish fourth. Weiss slipped back to round out the top five.

Polestitter Jimmy Owens took an early lead, with Dustin Nobbe and Devin Moran battling for the second-place spot. Owens stretched his lead at the halfway mark, as Moran closed in on Nobbe after the second-running driver brushed the wall in turn four. Starting ninth, with was Brandon Sheppard rallying late-race, battling Andy Haus for the final transfer spot. Owens won the consolation, with Nobbe, Moran and Sheppard transferring to the feature.

A yellow flag waved on the opening lap when Michael Page spun in turn one. Another caution fell on the ensuing restart when Vic Hill and Jackie Boggs tangled on the frontstretch. Polesitter Gregg Satterlee led the way when the race went green, with fourth-starting Chris Madden in tow. With the top-two cars distancing themselves from the remainder of the field, Satterlee held a comfortable lead at the halfway point. Satterlee won the heat, with Madden finishing second. Chase Junghans rounded out the podium in third.

Outside polesitter Bobby Pierce edged ahead of fellow front row starter Jared Landers to take an early lead. A yellow flag waved on the first lap when Blake Spencer slowed in turn one. Pierce held his lead on the restart as Devin Gilpin and Mike Marlar battled for the third-place spot. Holding a solid lead at the halfway mark, Pierce won the heat, with Landers finishing second. Marlar ran third, with Gilpin and Jeep Van Wormer taking the final two transfer spots.

Charging around the outside, second-starting Shane Clanton led the opening lap, with Hudson O’Neal shooting past polesitter Steven Roberts to run in second. A yellow flag waved on the first lap when Paul Stubber spun in turn four. The top-two cars started pulling away from the rest of the field at the halfway mark, with Clanton maintaining his lead over O’Neal. Stubber spun in turn two to draw another caution on lap six. Using momentum from the restart, Alex Ferree overtook O’Neal for second, setting his sights on Clanton. Clanton won the heat, with Ferree and O’Neal rounding out the podium.

Pulling ahead down the backstrech, outside pole sitter Josh Richards shot to an early lead, as fourth-starting Jimmy Owens slipped back to seventh. With the pair racing side-by-side, Ricky Weiss slipped ahead of Richards to take the lead on lap three. Stretching his lead in the final laps, Weiss won the heat, with Richards and Brent Larson rounding out the podium. Matt Miller and Jimmy Mars grabbed the final two feature transfer spots.