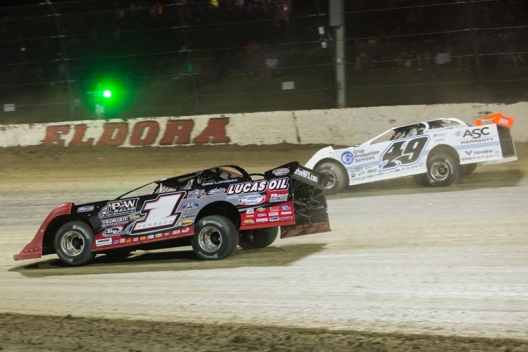 Pearson watched race leaders Don O’Neal of Martinsville, Ind., and Davenport fired sliders back and forth before joining the fray himself just beyond the halfway mark. Sliding from third to first as he dove into turn three, Pearson blew by O’Neal and grabbed the lead from Davenport. He then paced the field the remaining distance for a $10,000 victory.

Dale McDowell of Chickamauga, Ga., rallied from 17th to finish third, while O’Neal slipped to fourth after leading the first 13 laps. Tim McCreadie of Watertown, N.Y., completed the top five in a race that ended just after 2 a.m. EST after the evening program was delayed nearly four hours by pesky rain storms working their way across western Ohio.

“I know it’s late, but I’m sure them fans just seen one hell of a race,” said Pearson. “Don (O’Neal) and Jonathan (Davenport) were battling it out up there and they got bottled up in turn two. I just got a run and went in there and slid them. Me and Jonathan traded positions there a couple times. But we drove each other clean. I’m sure these fans will see one heck of a show tomorrow.”

After finishing second to Davenport in a preliminary makeup feature on Friday afternoon after Davenport swept into the lead on the opening lap, O’Neal, the polesitter, made sure Davenport didn’t lead the first lap of the first feature of Friday’s second session.

The 2011 Dream winner pulled ahead of Davenport on the opening circuit and began to ease away. The race was slowed by two cautions before lap 10, but each time O’Neal was able to pull away on the restart. Davenport, the 2015 Dream winner, finally reeled in the leader as the drivers approached the halfway mark. He slid ahead as they exited off turn four, but O’Neal countered to go back ahead.

Davenport finally wrestled the lead away on lap 14, but O’Neal again answered. Contact between the two in turns one and two pinched Davenport up the track, while forcing O’Neal into the outside fence on the back straight and allowed the third-running Pearson to close the gap.

“I caught Don and we starting sliding each other back and forth," said Davenport. "That last time I guess he thought he had me cleared and I thought he was gonna let me go so at the last second I backed off and just barely caught his quarterpanel. I hate it for him. He had a really good car too. And then I didn’t know Earl has closed back up on us like that. I made a mistake going in (turn) three. I went back to the top where I should have slid in through the bottom and kinda cut that corner off.”

With a huge run down the backstretch, Pearson dove under O’Neal entering turn three and slid ahead of Davenport. Pearson and Davenport then traded sliders again before Pearson finally took the lead for good. Afterwards, a pumped up Pearson was already looking ahead to Saturday. He finished the day tied with Chris Madden of Gray Court, S.C., at the top of the point standings that are used to set the lineups for Saturday’s eight heat races.

“It was a good points night for us,” Pearson said. “All day was good for us. I can’t say enough for the guys. It’s a dream come true to be up on this stage here at Eldora. I’m sure it’s about 2:30 in the morning, but we’re ready to get after it.”

Fourth-starting Shannon Babb jumped to an early lead and pulled away to win the consolation race ahead of Joey Moriarty. Babb won easily, finishing 1.583 seconds ahead following a two-lap shootout after a late caution for Jonathan Rowen, who blew a right rear tire. Duane Chamberlain finished third, while Austin Smith grabbed the final transfer spot.

Second-starting Frank Heckenast Jr., of Frankfort, Ill., finally nosed ahead of polesitter Dennis Erb Jr., on the second lap to grab the lead. He then turned back a furious charge from Erb with two laps remaining to win the heat. Erb pulled even with the leader in turn four, but couldn’t complete the pass and settled for second, just .483 of a second behind. Kody Evans, Billy Moyer Jr. and Michael Chilton completed the top five.

Jason Feger of Bloomington, Ill., powered by polesitter Ryan King as the pair raced off of turn four to complete the first lap and drove away to win the caution-free third heat. Sticking to his preferred line around the outside, Feger raced to a comfortable victory, winning by 3.422 seconds ahead of King. Kyle Bronson ran third throughout the heat, while Hall of Famer Billy Moyer nipped Freddie Carpenter at the line for the fourth position. Scott Bloomqust, who didn’t complete a qualifying lap, scratched from the heat as well.

Getting an excellent start from his pole position, Jon Henry of Ada, Ohio, led every lap of the second heat. Henry pulled ahead of Jason Jameson early before finishing 1.150 seconds ahead of Earl Pearson Jr., who passed Jameson for the runner-up spot with two laps remaining. Jameson settled for third, with Tim McCreadie, who started second, finishing fourth. Tim Manville started and finished fifth.

After a couple of aborted starts, polesitter Don O’Neal of Martinsville, Ind., got the jump on Chris Simpson, who was elevated to the front row when Dale McDowell was involved in an opening lap crash. O’Neal turned back late charges from Jonathan Davenport to win the first heat by a car length. Davenport, winner of a $5,000-to-win preliminary feature on Friday afternoon, finished second, while Shanon Buckingham was third. Simpson finished fourth and McDowell rallied from the back of the field to finished in the fifth and final transfer spot. A yellow flag waved on the opening lap when contact between polesitter  O’Neal and McDowell collected overall fast qualifier Kent Robinson, ending Robinson’s night and resulting in a restart. Austin Smith brought out a caution when he spun to a stop on the front stretch. Simpson spun to avoid contact in turn four to bring out a caution on lap one.