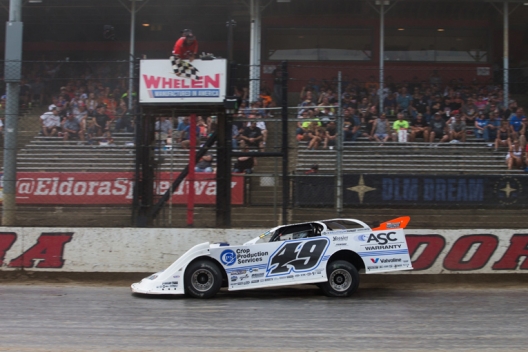 ROSSBURG, Ohio (June 8) — Fourth-starting Jonathan Davenport knew the initial start of Friday’s first 25-lap preliminary feature would be critical. He didn’t expect front-row starter Josh Richards to open the door for him, however. When the second-starting Richards decided to stay low as the field rolled toward the green flag, Davenport, of Blairsville, Ga., saw his opportunity and pounced.

Blasting into the lead before the starters reached the end of the front straightaway, Davenport, of Blairsville, Ga., led Friday’s Dream XXIV opener flag-to-flag. He earned $5,000 for his fourth career Dream preliminary feature victory since the three-day format was introduced in 2014 and first since 2016.

“The key to it was that start,” said Davenport. “I couldn’t believe Josh (Richards) pulled off the little bit of the brown right there around the cushion. I knew it was going to be really good. I was hoping they weren’t going to penalize it because I did get such a run. I guess they seen he just pulled off of it in the slick there.

“This is for my crew. I tore this thing up in the heat race and they got it back together.”

Davenport was one of a handful of drivers who wasn’t necessarily upset when Thursday’s action was washed out. After a subpar qualifying effort on Thursday, his Lance Landers-owned team went back to the drawing board.

“Luckily last night we did get that rain because we just were no good when we qualified,” he said. “We put our heads together and I think we were going to be OK for the second round last night. But then we had more time to sleep on it and do some more stuff.”

Davenport received only token pressure from Don O’Neal as they diced through traffic midway through the 25-lap feature. The elder O’Neal closed in on Davenport on lap nine, but only managed to toss a half-hearted slider at the leader as they raced off of turn two. A lap later, Don O’Neal slid up to the leader’s door again, but still couldn’t complete the pass. Davenport easily defended O’Neal’s challenge and pulled away to lead by 1.539 seconds as they completed lap 14.

The lone caution flew on lap 15, giving Don O’Neal and Richards a clear shot at Davenport. But with traffic out of the way, the 2015 Dream winner slipped his white No. 49 back up to the cushion and set sail again.

“Everybody knows I love being up on the wall,” added Davenport. “That’s my cup of tea right there.”

Davenport pulled out to a comfortable lead in the waning laps, continuing a dominating start to the weekend that began with a 2-second victory over Hudson O’Neal in his heat race.

Hudson O’Neal, who rallied from seventh to second in his heat, completed a similar rally in the feature. Running eighth on the lap 15 restart, the 17-year-old O’Neal, charged forward over the final 10 circuits to pass Devin Gilpin, Gregg Satterlee and Bobby Pierce to crack the top five.

Shannon Babb sang the praises of his engine builder, Clements Race Engines, after rolling to victory in the first heat. “Big thumbs up to Clements,” said Babb, who installed a brand-new powerplant from the South Carolina engine builder in his car on Thursday. “It runs pretty good.” … Heat 2 victor Don O’Neal remarked that his Clint Bowyer Racing machine was “still a little snug” handling into the corner, but he felt that if his crew was able to correct that condition he would “have a good hot rod” for the feature. … Devin Moran had his brand-new XR1 Rocket running well in second halfway through Heat 2 when the lapped Bryant Dickinson bumped the wall between turns three and four and slid to a stop in the middle of the track — right in Moran’s path. Moran clipped Dickinson and spun hard into the outside wall; he was able to limp into the pit area, but he knocked the rearend out of the machine among other damage. His crew was scrambling in hopes of repairing the car in time for the evening program. … Jonathan Davenport won the third heat but was a little upset that he gave his crew extra work because he hit the turn-one wall on the original start. “I just bottomed out getting into turn one right there,” he said. “I didn’t think there’s be a hole going in.” … Nick Hoffman came from the tail of the third heat to claim the final transfer spot after repairing much of his car’s right-side bodywork, which was damaged when he slapped the turn-one wall quite hard during qualifying and didn’t register a time. … Devin Gilpin expressed a sense of uncertainty after winning the fourth heat: “I’m not sure what the racetrack is gonna do,” said Gilpin, who starts sixth in the A-main. “I’m just gonna have to consult with my boys. I’ve got a lot of faith in them.”

Polesitter Jeep VanWormer of Piconning, Mich., eased ahead of fellow front row starter Andy Haus on the opening lap, bringing third-starting Vill Hill with him, and went on to lead all 12 laps of the consolation to earn a transfer spot into Friday afternoon’s first feature. VanWormer won by 1.797 second ahead of Rod Conley. Steve Casebolt and Tyler Bruening completed the top four to transfer to the first feature of the day.

Fighting off a late charge by Bobby Pierce, polesitter Devin Gilpin of Columbus, Ind., won the final heat. Leading every lap, Gilpin finished .604 of a second ahead of Pierce, while Mike Marlar, who tagged the wall during qualifying, rallied from ninth to finish third. Earl Pearson Jr. finished fourth and Jason Feger finished fifth. The race was slowed on the second lap for debris in turn one.

Despite repeatedly slapping the turn one wall as he slung his Lance Landers-owned machine into the corner, Jonathan Davenport of Blairsville, Ga., raced to a convincing win in the third heat. Davenport cruised to a 1.862-second victory over Hudson O’Neal, who rallied from seventh to second. Billy Moyer Jr., who tagged the wall several times as well finished third, while Mason Zeigler was fourth. Picking up the final transfer spot, Nick Hoffman finished fifth after starting 10th. Polesitter Vic Hill slipped to sixth and finished the race with heavy body damage to his No. 1 car.

Powering ahead on the opening circuit, polesitter Don O’Neal of Martinsville, Ind., pulled away from Jason Jameson on the start. O’Neal had to survive a late restart and a challenge from Josh Richards, who briefly nosed ahead. O’Neal used a cross-over exiting turn two to pull back ahead of Richards and led the final three laps. Richards finished second, with Ryan King third and Jerry Bowersock fourth. Jameson finished fifth. The caution flew on lap seven when second-running Devin Moran of Dresden, Ohio, crashed hard into the turn four wall as he tried to avoid the spinning car of Bryant Marsh. Moran’s car sustained heavy damage. The initial start was slowed when Bryan Dickerson spun in turn one. Jesse James Lay made hard contact with the wall midway through the race but nursed his machine to the finish.

Pulling ahead of Gregg Satterlee on the second lap, polesitter Shannon Babb of Moweaqua, Ill., drove away to win the first heat. Satterlee ran second throughout to finish in the runner-up spot .266 of a second behind Babb, while fourth-starting Tim Mcreadie finished third. Former Dream winner Matt Miller finished fourth, with Chris Simpson grabbing the final transfer spot.

After Thursday night’s heavy rain, hot, overcast and muggy conditions prevailed when race cars hit the track for hot laps at 11:55 a.m. to kick off the first half of Friday’s doubleheader. A chance of showers remains beginning later this afternoon, but forecasts seem to be reducing the threat of precipitation for this evening. … Tim McCreadie’s Sweeteners Plus-backed Longhorn house car was one of the last to pull into the pit area on Thursday — and it arrived not in the familiar red Sweeteners Plus truck and trailer but in an older, one-car enclosed trailer pulled by a dually pickup truck. McCreadie was not able to find a truck driver to pilot his rig, which features a semi-cab truck rather than a toterhome, from Longhorn’s shop in North Carolina so his crewman Phillip Snellen and Longhorn employee Matt Langston hastily put the car and equipment in the conventional trailer and left the Tar Heel State at 5 o’clock this morning. Using a smaller trailer has also made T-Mac’s working conditions today a bit rougher: he’s not parked on a concrete portion of the pits, so the area around his spot inside turn two is extremely muddy. … Devin Moran is entered with a new Tye Twarog-owned XR1 Rocket that also carries a new powerplant. He shook it down Wednesday night by turning about 20 laps at his grandfather’s Muskingum County Speedway in Zanesville, Ohio. … Duane Chamberlain, who did not enter last year’s Dream because he was sidelined by headaches and other residual pain associated with a neck issue, is back in action this weekend with longtime owner Bill Dues’s machine. He said he still has some neck pain — it takes him awhile each morning to get his muscles stretch out — but the headaches are gone so he’s definitely feeling better than he did a year ago. … Three Australians are competing this weekend: Paul Stubber, Ben Nicastri and Ryan Fenech. … Jared Landers is behind the wheel of the Moring Motorsports Black Diamond car that he drove for the first time at last year’s Knoxville Nationals. He’s making his first crown jewel appearance at Eldora since the 2016 Dream, which took place one month before he suffered a torn carotid artery in a wild flipping accident at Tri-City Speedway in Pontoon Beach, Ill. … Larson’s effort this weekend is being assisted by upstate New York native John Pfeffer, a former crew chief for Earl Pearson Jr. who offered his services to Moring’s team manager/chassis builder Ronnie Stuckey for the weekend. … Justin Duty is a first-time Eldora visitor, but the Oregon driver who is basing his 2018 racing action in the Southeast doesn’t have his car along. He’s at the track providing crew help to Timothy Culp, who is down on manpower because his crew chief, veteran racer Wendell Wallace, is away on a bear-hunting trip.