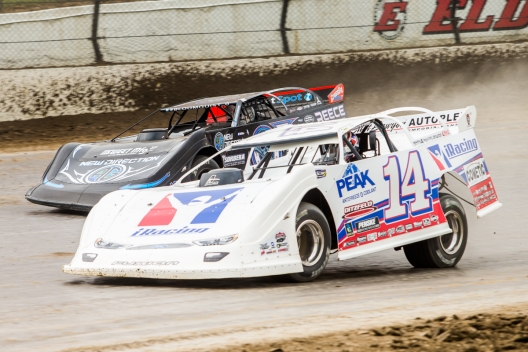 ROSSBURG, Ohio (June 8) — Darrell Lanigan of Union, Ky., was the first to admit his 2018 season hasn’t gotten off to the greatest start. But a win in Friday afternoon’s Dream XXIV even preliminary feature at Eldora Speedway is certainly a step in the right direction.

Inheriting the lead on lap 21 of 25 when race leader Chris Madden of Gray Court, S.C., retired with damage to his No. 44, Lanigan led the final four circuits, holding off Jimmy Owens of Newport, Tenn., to earn a $5,000 payday in his first victory of the season.

“We’ve been terrible this year,” Lanigan said. “We went back this week and built a new piece. At the Show-Me we were terrible. So we built a new piece, went and tested at Florence and we had a really good hot rod this weekend. We were a little tight and got rained out for the qualifying and it worked in our favor.”

Pulling ahead of fellow front row starter Scott Bloomquist of Mooresburg, Tenn., down the backstretch, it was Madden charging out to an early lead. Holding a half straightaway lead at the halfway mark, Madden worked his way through lapped traffic, looking to be well on his way to his first Eldora victory. And that’s when disaster struck.

Slipping over the berm, Madden got into the turn-one wall on lap 21, sustaining damage to the right-front of his car. With the Barry Wright driver forced to retire, Lanigan assumed the point, scoring a Dream preliminary victory for the second straight season.

“I thought he was going there and all of a sudden he checked up hard,” Lanigan said. “I got my right-front on him and I was like, ‘Man, I done tore the right-front up.’ But it didn’t hurt it too bad. We had a pretty good hot rod tonight.”

Closing in on Lanigan on the final lap, Owens finished runner-up, with Bloomquist running third. Jared Landers of Batesville, Ark., finished fourth, with Dale McDowell of Chickamauga, Ga., rounding out the top five.

Notes: Fourth-place finisher Jared Landers was scored a lap down in his heat race after pitting early. He was actually on the lead lap to finish third and was a late addition to the feature lineup. … The race was slowed by three cautions. … A yellow flag waved on lap three when Jackie Boggs slowed in turn four with damage to his car. … A caution fell on lap eight for debris on the racetrack. … A yellow flag flew on lap 10 when Duane Chamberlain and Adam Bowman tangled in turns one and two.

Working the bottom of the racetrack, Chase Junghans slipped ahead of Kent Robinson out of turn four to lead the opening lap. With Junghans pulling away up front, Dennis Erb Jr. and Michael Page battled for the final transfer spot at the halfway mark. A yellow flag waved on lap nine when Paul Stubber got into the wall. Junghans held his lead on the restart, with a three-car battle ensuing for the third-place spot. Junghans won the consolation, with Robinson, Frank Heckenast Jr. and Dennis Erb Jr. transferring to the main event.

Heat 1 winner Jon Henry was hoping for the extreme outside lane to slow down as the program goes along, but he was nevertheless a beaming race car driver after claiming the checkered flag. “That’s a lot of fun,” he said. “When you can come here and beat these guys, it’s a blast.” … No driver might have been happier about Thursday’s rainout than Chris Madden, who would have been saddled with a poor qualifying time if the program had been completed. He used today’s new program to improve his time-trial effort and win the second heat. “We kind of got a mulligan last night,” he said. “We definitely needed to take advantage of it today. You don’t get many second chances.” … Michael Page’s hopes in the second heat were effectively dashed after he smacked the wall between turns one and two midway through the prelim, damaging the right-rear corner of his machine and slowing his pace for the remainder of the distance. … Jackie Boggs waxed a bit nostalgic after capturing the third heat: “It’s like going back to old-school racing today. You gotta be fast, but you gotta be able to turn.” … Freddie Carpenter found himself starting at the rear of Heat 3 after failing to log a qualifying lap because his Kryptonite car’s left-rear tire rolled off the inside of the bead as he headed onto the track. The West Virginia driver, who had a solid qualifying run on Thursday negated by the rain that postponed the program, rallied to claim the fifth and final transfer spot with a last-lap pass. … Alex Ferree’s hopes for moving on to the feature ended in Heat 3 after two incidents: on a lap-five restart he was sent spinning in turn two when a charging Frank Heckenast Jr. clipped the right-rear corner of Ferree’s car coming off turn two, and one circuit later he caught the turn-one wall hard and spun around. “I got spun around and then I just drove like a …” Ferree said, his voice trailing off. With his car’s j-bar and driveshaft left broken from the second accident, Ferree’s focus shifted to making repairs for the evening show. … Billy Moyer won the final heat despite racing the entire distance with right-rear body damage sustained in an opening-lap tangle with Brandon Overton, who was coming hard off the outside in turn two when Moyer hit a hole on the inside of the track and push straight up, leaving Overton no escape from bouncing off Moyer’s car and hard into the outside wall. Moyer said he hated that his problem with the rut cost Overton, who had little to say about his fate.

A yellow flag waved on the first lap when Billy Moyer and Brandon Overton collided in turn two. Moyer sustained heavy damage to the right side of his car, with Overton towed off the track. His car leaking fluid, Michael Chilton retired under the caution, with Jared Landers tagging the tail after pitting. Moyer led the way as the race went back green, with Colton Flinner spinning in turns one and two to draw a caution on lap two. Moyer won the heat, with Darrell Lanigan and Shanon Buckingham rounding out the podium.

Rolling around the top side, outside Alex Ferree took an early lead, with a yellow flag waving on lap two when Tim Manville and Jonathan Rowan collided, sending Rowan spinning in turn four. Polesitter Jackie Boggs shot ahead of Ferree on the restart, with Jimmy Owens challenging Manville for the third-place spot. Another yellow flag flew on lap four when Aaron Ridley got into the wall in turns one and two. Ferree drew a caution on the ensuing restart when he spun in turn two. Boggs held his lead on the next restart, with Owens pulling ahead of Manville to take second. Ferree got into the turn one wall to draw another caution on lap five. Fighting back challenges from Owens, Boggs won the heat, with Owens, Manville, Jimmy Mars and Freddie Carpenter.

Slipping under the front row starters, third-starting Chris Madden edged ahead of polesitter Brent Larson at the line to lead the first lap. With Madden setting a torrid pace out front, Larson and Scott Bloomquist battled for the third-place spot. A yellow flag flew on lap four for debris on the racetrack, with Lance Elson retiring under the caution. Bloomquist shot ahead of Larson to take second on the restart, with Kyle Bronson in tow. Madden won the heat, with Bloomquist finishing second. Bronson held off Timothy Culp to round out the podium in third.

Getting a run down the backstretch, second-starting Brandon Sheppard fought back polesitter Jon Henry’s turn-four slider to lead the opening lap. Henry shot to the front of the field on the second circuit, with Dale McDowell running a solid third. A yellow flag waved on lap five when Paul Stubber spun in turns one and two. Choosing the outside lane, Henry held his lead on the restart, with McDowell edging ahead of Sheppard to take over the second-place spot. Starting eighth, Adam Bowman used momentum from the restart to run as high as third, battling Ricky Weiss in the final laps. Henry won the heat, with McDowell finishing second. Sheppard, Weiss and Bowman grabbed feature transfer spots.

After Thursday night’s heavy rain, hot, overcast and muggy conditions prevailed when race cars hit the track for hot laps at 11:55 a.m. to kick off the first half of Friday’s doubleheader. A chance of showers remains beginning later this afternoon, but forecasts seem to be reducing the threat of precipitation for this evening. … Tim McCreadie’s Sweeteners Plus-backed Longhorn house car was one of the last to pull into the pit area on Thursday — and it arrived not in the familiar red Sweeteners Plus truck and trailer but in an older, one-car enclosed trailer pulled by a dually pickup truck. McCreadie was not able to find a truck driver to pilot his rig, which features a semi-cab truck rather than a toterhome, from Longhorn’s shop in North Carolina so his crewman Phillip Snellen and Longhorn employee Matt Langston hastily put the car and equipment in the conventional trailer and left the Tar Heel State at 5 o’clock this morning. Using a smaller trailer has also made T-Mac’s working conditions today a bit rougher: he’s not parked on a concrete portion of the pits, so the area around his spot inside turn two is extremely muddy. … Devin Moran is entered with a new Tye Twarog-owned XR1 Rocket that also carries a new powerplant. He shook it down Wednesday night by turning about 20 laps at his grandfather’s Muskingum County Speedway in Zanesville, Ohio. … Duane Chamberlain, who did not enter last year’s Dream because he was sidelined by headaches and other residual pain associated with a neck issue, is back in action this weekend with longtime owner Bill Dues’s machine. He said he still has some neck pain — it takes him awhile each morning to get his muscles stretch out — but the headaches are gone so he’s definitely feeling better than he did a year ago. … Three Australians are competing this weekend: Paul Stubber, Ben Nicastri and Ryan Fenech. … Jared Landers is behind the wheel of the Moring Motorsports Black Diamond car that he drove for the first time at last year’s Knoxville Nationals. He’s making his first crown jewel appearance at Eldora since the 2016 Dream, which took place one month before he suffered a torn carotid artery in a wild flipping accident at Tri-City Speedway in Pontoon Beach, Ill. … Larson’s effort this weekend is being assisted by upstate New York native John Pfeffer, a former crew chief for Earl Pearson Jr. who offered his services to Moring’s team manager/chassis builder Ronnie Stuckey for the weekend. … Justin Duty is a first-time Eldora visitor, but the Oregon driver who is basing his 2018 racing action in the Southeast doesn’t have his car along. He’s at the track providing crew help to Timothy Culp, who is down on manpower because his crew chief, veteran racer Wendell Wallace, is away on a bear-hunting trip.