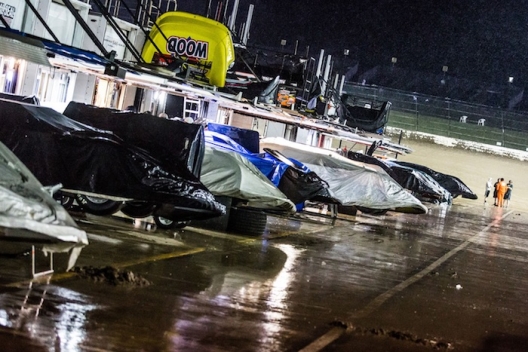 After persistent rain postponed Thursday’s opening night of Dream XXIV, Eldora Speedway has scheduled a Friday doubleheader featuring four preliminary features. Hot laps for Friday’s opening preliminary event are scheduled for noon with the program running through the afternoon; Thursday’s wristbands and rainchecks will be honored. Following the afternoon event, the track will be cleared and spectators readmitted for Friday’s evening regularly scheduled program with hot laps tentatively at 6:30 p.m.

The 78-car field signed in for action is down just one entrant from last year’s Dream. … A pop-up shower hit the speedway just before 5:45 p.m. and lasted less than 15 minutes; while more dark clouds continued to dance around south of the track, the surface wasn’t drenched and hot laps began only a few minutes past the scheduled 6:30 p.m. start time. … Tim McCreadie’s Sweeteners Plus-backed Longhorn house car was one of the last to pull into the pit area — and it arrived not in the familiar red Sweeteners Plus truck and trailer but in an older, one-car enclosed trailer pulled by a dually pickup truck. McCreadie was not able to find a truck driver to pilot his rig, which features a semi-cab truck rather than a toterhome, from Longhorn’s shop in North Carolina so his crewman Phillip Snellen and Longhorn employee Matt Langston hastily put the car and equipment in the conventional trailer and left the Tar Heel State at 5 o’clock this morning. … Devin Moran is entered with a new Tye Twarog-owned XR1 Rocket that also carries a new powerplant. He shook it down Wednesday night by turning about 20 laps at his grandfather’s Muskingum County Speedway in Zanesville, Ohio. … Duane Chamberlain, who did not enter last year’s Dream because he was sidelined by headaches and other residual pain associated with a neck issue, is back in action this weekend with longtime owner Bill Dues’s machine. He said he still has some neck pain — it takes him awhile each morning to get his muscles stretch out — but the headaches are gone so he’s definitely feeling better than he did a year ago. … Three Australians are competing this weekend: Paul Stubber, Ben Nicastri and Ryan Fenech. … Jared Landers is behind the wheel of the Moring Motorsports Black Diamond car that he drove for the first time at last year’s Knoxville Nationals. He’s making his first crown jewel appearance at Eldora since the 2016 Dream, which took place one month before he suffered a torn carotid artery in a wild flipping accident at Tri-City Speedway in Pontoon Beach, Ill. … Justin Duty is a first-time Eldora visitor, but the Oregon driver who is basing his 2018 racing action in the Southeast doesn’t have his car along. He’s at the track providing crew help to Timothy Culp, who is down on manpower because his crew chief, veteran racer Wendell Wallace, is away on a bear-hunting trip.