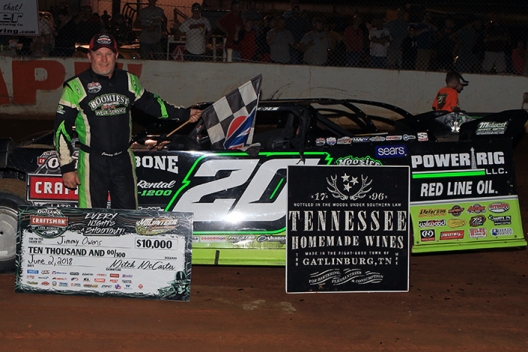 Rolling off from the third starting spot, Owens used early-race lapped traffic to his advantage, moving into second by lap 15 of 50. Closing in to race door-to-door with Madden at the halfway mark, Owens’s challenges for the lead fell short. As he attempted to slip under Madden on lap 42, the pair made slight contact in turn four, giving the No. 44 the advantage at the line.

Taking one final shot at the lead, Owens crossed ahead of Madden down the frontstretch on lap 47, sliding ahead out of turn two to assume the point one circuit later. Leading the final laps, Owens notched his second WoO victory of the 2018 season.

"It was an awesome track tonight," Owens said. "It was just one of them deals you didn't want to be leading because you didn't know if the track groove was going to be up high or down low. But the groove was pretty much wherever you wanted it to be. We had a good car. It was a heck of a race. I enjoyed every bit of it."

It was Chilton charging out to the lead at the drop of the green flag, with second-running Madden closing the distance by lap five. With the pair running side-by-side on lap 12, Madden slipped under Chilton to take the lead one lap later. Fighting back multiple challenges from Owens, it appeared he was going to pull away for another WoO victory. But he was unable to fend of Owens’s final charge.

"We're a little disappointed we didn't get the win," Madden said. "Lapped traffic got us bottled up. In open traffic we had the best car here tonight. We've done a hell of a job with our race car this year. We've got speed in it and the wins will come. He pulled a big slide job off down here and just happened to clear the lapped car without crashing him. It is what it is."

Among early retirees in Friday’s series event at 411 Motor Speedway in Seymour, Tenn., McDowell decided to debut a brand new Sweet-Bloomquist Race Car on Saturday night. His choice proved to be the right one, with the Georgia driver notching his eighth podium finish of the season in the 50-lap feature.

"I was seeing a heck of a race there," McDowell said. "I was right there, I just couldn't capitalize. Those guys were racing their tails off. It's a lot of fun to get up there and race like that, especially in that traffic."

Notes: Owens notched his 12th career World of Outlaws victory and his second of the 2018 season. He scored a $25,001 victory on May 12 at Fayetteville (N.C.) Motor Speedway. … The WoO tour returned to Volunteer for the first time since 2008. ... Cory Hedgecock of Loudon, Tenn., was the winner of Friday’s series stop at 411 Motor Speedway. … Jensen Ford of Piney Flats, Tenn., was the winner of the $1,500 Crate Late Model feature.