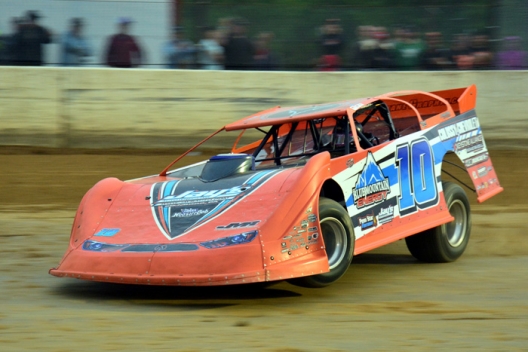 But don’t bother asking Miley about the strategy he used to pull off the pass that capped off his advance. He’ll just tell you he had none.

With the first 72 circuits of the feature running caution-free, Miley, 32, of Pittsburgh, Pa., found himself sailing by so much slower traffic that his deciding move — a slide by race-long pacesetter Alex Ferree of Saxonburg, Pa., to assume command with 15 laps remaining — was simply a blur to him.

“What’s funny, when I was passing Alex for the lead, I didn’t even realize that he was the leader until I seen on the restart (on lap 72) that he was in second,” Miley said with a laugh after claiming the $8,000 triumph. “I thought I was lapping him, I had no idea.”

Back-to-back cautions on laps 72 and 73 — the only slowdowns of the race — settled things down for Miley, who easily controlled the final tours to beat Ferree to the finish line by a healthy half-straightaway margin.

Third-place was claimed by 19-year-old Wyatt Scott of Garland, Pa., the son of veteran western Pennsylvania racer David Scott and grandson of Stateline owner Jim Scott, whose 80th birthday was celebrated with the running of the unsanctioned show that was postponed one week by rain.

Miley’s first-ever win at Stateline continued his strong debut season driving for car owner Joe Corrado of Butler, Pa., who ironically spent the past eight seasons fielding his familiar No. 10 Dirt Late Models for Ferree. With Ferree returning to family-owned equipment in 2018, Miley has joined forces with Corrado and has already won four times, all in the last month.

The richest checkered flag of Miley’s short stint with Corrado came in hard-earned fashion as he hustled steadily forward from mid-pack in his XR1 Rocket. The extended period of uninterrupted racing that opened the race confused Miley’s perception of his positioning on the track but certainly didn’t faze him. In fact, he relished the caution-free action.

“I definitely knew it was gonna be a long race,” Miley said. “I didn’t really think there were gonna be that many green laps, but I’m kind of glad there was. That might have helped me.

“Thankfully, this place ain’t very hard on tires so we only went one step harder (with compound choice) than we did in the heat race. It didn’t really hurt your tires, but you kind of just got to save your car for the end of the race to still have tires left.”

The 37-year-old Ferree, meanwhile, was hampered by the race’s frenetic pace. The straightaway-plus edge he built during the feature’s first half dwindled away after the crossed flags were displayed as his rubber gave out.

“We went a little softer than everybody else on tire, took a gamble,” Ferree said. “You gamble on nights like tonight when you think you’re gonna have, you know, 50 cautions, so I went soft thinking that. Then we ran 65 green-flag laps and it bit me at the end.

“I figured as long at it fired again, being a 1300 (compound tire), I could get going for a couple laps and then just maintain. Being a little bit softer, I thought I could just get rolling again hopefully as long as it didn’t seal over, so I wasn’t too worried as long as the driver didn’t screw up too bad.”

But according to Ferree, “I was hanging on from probably about lap 55, 60 on. I was just hanging on hoping that not many guys passed me to be honest with you, because my right-rear was just gone. It just wasn’t working no more. I was just babying it as much as a could. I gave Jared a little run there (once Miley caught up), but I had nothing for him. He was good at the end when it counted.

“Congratulations to the 10 team and Jared Miley and Joe Corrado,” Ferree said. “They’ve had a heck of a year so far.”

The surprise of the evening was the teenage Scott, whose third-place finish represented one of the best outings of his fledging full-fender career. He began driving a Dirt Late Model in 2014, competing in the Crate class and earning Stateline Speedway’s Rising Star Award that year.

Finishing on the podium alongside two of western Pennsylvania’s top regional talents was a thrill for Scott.

“It was huge,” Scott said. “It’s grandpa’s 80th birthday. That’s the first long race I’ve actually ever done, so, you know, I got tired. But it really meant a lot to run good in grandpa’s race.

Scott pushed his ‘X’ car into second place early in the feature but never threatened Ferree before losing the position to Miley on lap 24.

“I probably should’ve raced a little harder (early) … to try and run Alex down,” Scott commented. “But I didn’t know how the track was gonna wear on tires so I tried to just ride as much as I could.

“(Miley) got underneath me and I knew he started 12th, so he was just gonna drive right past me and drive away. I kind of changed what I was doing (at that point). I was right there, we got door-to-door a couple times, we gave each other lots of room. It was a blast racing him.

“I was completely content with just going green-to-checkered and not having to do any restarts,” he continued. “I didn’t think I had any more for them guys. They were quite a bit better than I was so I was pretty nervous, but it all worked out. We stayed where we were and I’m happy with that.”

The race’s first caution flag flew on lap 72 when Doug Eck slowed in turn two. One circuit later another caution was needed after a backstretch scrape near the front of the field between Briggs and Darrell Bossard left Bossard with damage that forced him to the pits and caused a chain-reaction three-car pileup in turn two.

Notes: Miley’s previous victories this season with Corrado came on May 11 at Lernerville Speedway in Sarver, Pa. (worth $2,525); May 12 at Tyler County Speedway in Middlebourne, W.Va. ($5,000 Ultimate-sanctioned Earl Hill Memorial); and May 18 at Thunder Mountain Speedway in Knox Dale, Pa. ($3,000 ULMS-sanctioned event). … Chub Frank, who lives just miles from the track his father helped build six decades ago, ran in the top five for much of the distance but slipped to seventh at the finish. … Eighth-place finisher Max Blair was the final driver on the lead lap at the checkered flag. … The event celebrated the 80th birthday of Stateline owner Jim Scott, a former driver who won many races at Stateline and other area tracks and also competed in the ACRA stock car series at such major ovals as Daytona, Talladega and Texas World Speedway. He purchased Stateline in August 2015 with his wife, Jean, and partner Brian Horner. … The feature field was paced by a restored Dirt Late Model that Bob Wearing Sr. drove to a 100-lap win at Stateline in the early ’80s. The machine was also being displayed in the grandstand area during the evening.