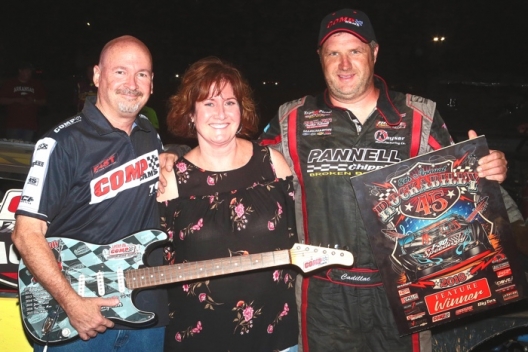 woodyhamptonphotos.com
Jack Sullivan enjoys his Rockabilly 45 victory with Comp Cams rep Billy Carroll and I-30 Speedway promoter Tracey Clay.
What won the race: Grabbing the lead on the opening lap, third-starting Jack Sullivan of Greenbrier, Ark., led all 45 circuits to pick up his series-best fourth Comp Cams Series win of the season and second victory of the weekend with Saturday's triumph in the eighth annual Rockabilly 45 at I-30 Speedway. Sullivan outran Payton Looney, while earning $5,000 for his second victory in the annual event.
Quotable: “I didn’t know where the hell to go. That’s the problem leading, you’re just a sitting duck sometimes. That’s what happened to Kyle (Beard at Crowley’s Ridge) last night, you know. He just didn’t know where I was,” said Sullivan. “I just tried to keep my momentum of and tried to get in a good line and it panned out for us. I’m blessed. That’s all I can say.”
Key notes: Sullivan had to fend off Hall of Famer Billy Moyer in traffic more than once. Moyer pulled even with Sullivan on the backstretch in lap 19, but he never managed to lead a lap. … Looney fell back to fifth before rallying late to grab the runner-up spot. … Moyer ran second for most of the race, but gave way to Looney on lap 41. … Timothy Culp charged into second on lap 23, but retired to the pit area two laps later. … The race was slowed by one caution. ... There have now been eight different winners in 12 series races this season. … It was the 28th career Comp Cams win for Sullivan, who won the weekend opener at Crowley’s Ridge on Friday. He also won his second straight tour race at I-30. Sullivan last won there Sept. 16, 2017. … The series returns to I-30 on Aug. 4.
On the move: Hunter Rasdon of Jonesboro, Ark., finished sixth after starting 10th.
Winner's sponsors: Sullivan’s Rocket Chassis is powered by a Clements Racing Engine and sponsored by Pannell Chipping, Mark Martin Automotive, Keyser Mfg., Central Arkansas Pest Services and Bennings Heating & Air.
Points chase: Sullivan padded his points lead with his victory as he seeks a fourth consecutive Comp Cams title.
Car count: 23
Fast qualifier: Chandler Petty
Next series race: June 29, Salina Highbanks Speedway (Salina, OK) $3,000
Editor's note: Results and race details are unofficial.