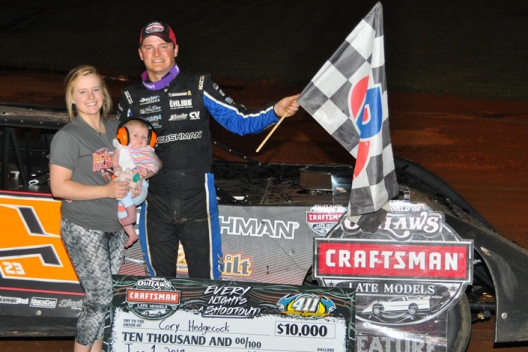 SEYMOUR, Tenn. (June 1) — It was back in 2016 that Cory Hedgecock of Loudon, Tenn., scored his first career Super Late Model victory at 411 Motor Speedway. And now the Seymour, Tenn., oval is also home to his richest career victory.

Sliding ahead of race leader David Breazeale of Four Corners, Miss., in turn four, Hedgecock powered to the front of the field on lap 23 of 50, leading the remaining circuits for his first career World of Outlaws Craftsman Late Model Series victory. Notching his 10th victory on his 2018 campaign, Hedgecock earned a career-high $10,000 payday.

"I knew if I was every going to have a chance to win one of these races, it was no doubt going to be here," Hedgecock said in victory lane. "I'm tickled to death."

Starting outside the front row, it was Breazeale charging to the lead at the drop of the green flag, cruising over the field in the early running. As the frontrunners approached lapped traffic, Hedgecock started to reel in the race leader, pulling alongside Breazeale at the line on lap 22. After taking the point just two laps shy of the halfway mark, Hedgecock was never seriously challenged for the lead.

"I did not want them cautions," Hedgecock said of late-race yellow flags. "I had mixed emotions. That long green run, I'm not sure if I didn't just use that right-rear up. It got hot on me. I was like, 'OK, maybe I do want a caution.' But the problem is it stacks all of us back up ... I am tickeled to death. This is awesome."

Working through lapped traffic, Owens was able to close in on Hedgecock mid-race, racing right on the back bumper of the No. 9 on lap 36. But late-race cautions allowed Hedgecock to pull away in the final laps, with Owens setting for a second-place finish at the checkered flag.

"It's awesome to get to see Cory win this," Owens said. "He's a tough driver to get around down here. I'm glad to bring this car home in one piece and a second. Maybe we can move on to tomorrow and have a better run."

Coming off a strong run in the Show-Me 100, Mike Marlar notched his second straight third-place finish, giving home-state drivers a clean sweep of the 411 podium.

"The Tennessee gang, we all got up and running," Marlar said. "Last week out at the Show-Me, me and Jimmy and Scott (Bloomquist) was all racing in the front there for a long time. It was a fun race and the Tennessee guys are pretty tough."

Notes: Hedgecock won in his first career WoO start; he previously entered one series event at Smoky Mountain Speedway in Maryville, Tenn., on May 9, 2015, but failed to qualify for the feature. ... The race was slowed by four cautions. … A yellow flag waved on lap six when Dale McDowell slowed off the pace in turns one and two. … Robby Moses slowed in turn four to draw a caution on lap 41. … Another yellow flag flew on lap 44 when Casey Roberts got into the turn-two wall.  … After rallying from the 14th starting spot to run fifth, Brandon Overton got into the turn one wall, slowing with a flat tire on lap 45 to retire early. … Kyle Hardy of Stephens City, Va., who entered 411's action after Friday's scheduled Ultimate Southeast Late Model Series event at Carolina Speedway in Gastonia, N.C., was cancelled earlier in the day due to rain that caused the track's fronstretch wall to fall down, started fourth and appeared headed to a top-five finish until a flat tire forced him pitside with five laps remaining. ... The series made its first-ever visit to the Seymour, Tenn., oval for one of the richest paying events in track history. ... Chase King of Seymour, Tenn., was the winner of the $1,500 Crate Late Model feature.