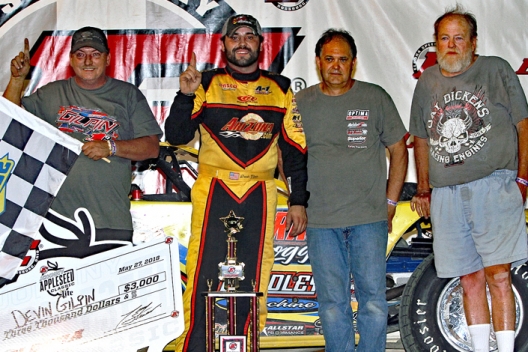 Jim DenHamer
Devin Gilpin earned $3,000 for Sunday's ALMS victory at Eldora.
What won the race: Bolting from fourth to first on the opening lap, Devin Gilpin of Columbus, Ind., led all 25 laps to win the Johnny Appleseed Classic at Eldora Speedway Sunday night. Gilpin worked flawlessly around the famed half-mile oval, turning back a mid-race charge from Devin Moran, while keeping five-time Johnny Appleseed winner Matt Miller at bay after a caution with eight laps remaining.
Quotable: “This is a big boost (for us) coming in here (for the Dream) in a couple of weeks. You know that’s our goal,” said Gilpin. “We’ve been coming here the first couple nights here just to get better to make the Dream and man we made all the right adjustments tonight. I can’t thank Tader (Masters) and Kurt and all the boys enough. Man they’ve worked their butts off. And Jim Beeman for giving me this opportunity. If it wasn’t for Jim I wouldn’t be able to do this. We’re all geared up for this Dream. It’s the toughest race in the world. Our goal is just to get in it and this was a good test for us.”
Key notes: Gilpin finished 1.117 seconds ahead of Miller, scoring his third victory of the weekend. He swept Super Late Model and modified feature events at Brownstown (Ind.) Speedway on Saturday night. … Moran chased Gilpin for the first 17 laps, but two separate scrapes with the wall left his car’s spoiler dangling. When the spoiler fell off with eight laps remaining, Moran brought out a caution and retired to the infield pit area for a 19th-place finish. ... Tennessean Shanon Buckingham made the overnight haul from Wheatland, Mo., where he finished 14th in the Show-Me 100 on Saturday. Buckingham won his heat and finished fifth. ... The Johnny Appleseed Classic serves as the final tuneup for drivers before the $100,000-to-win Dream at Eldora on June 7-9. … The Sunoco American Late Model Series series made its second of four visits to Eldora this season. … Sunday's action served as the finale of a three-race holiday weekend for the ALMS tour during which Brandon Thirlby (Friday at I-96 Speedway) and Rusty Schlenk (Saturday at Oakshade Raceway) also scored victories.
On the move: Steve Casebolt of Richmond, Ind., improved from 16th to sixth.
Winner's sponsors: Gilpin's Jim Beeman-owned MasterSbilt is sponsored by Dasco Racing Supply, Jim Beeman Lumber, Jason Clarkson Logging, Bradley Machine and KBC Graphix.
Points chase: Heading into the weekend, Devin Gilpin (130) led Jimmy Mars (120) and Nick Hoffman (118).
Car count: 25
Fast qualifier: Dustin Nobbe
Time: 15.400 seconds
Polesitter: Shanon Buckingham
Heat race winners: Shanon Buckingham, Jerry Bowersock, Devin Moran
Consolation race winners: Steve Casebolt
Next series race: June 16, Oakshade Raceway (Wauseon, OH) $5,400
Editor's note: Results and race details are unofficial.