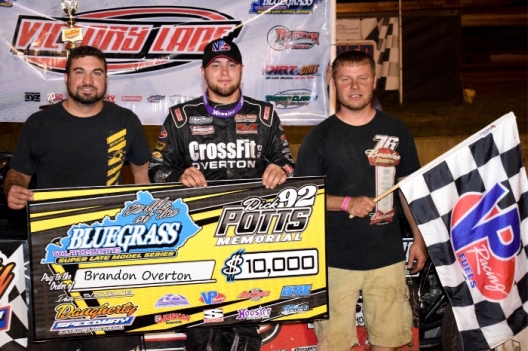 BOSWELL, Ind. — A change of scenery provide a change of results for Brandon Overton over the Memorial Day weekend.

With his Dream Racing team struggling with no finishes better than fourth since early February, the 27-year-old driver from Evans, Ga., opted to avoid unsettled weekend weather in the Southeast to make his debut at Daugherty Speedway on the western edge of Indiana.

The decision paid off as the third-starting Overton blitzed the front-row starters at the outset of Sunday's Dick Potts Memorial and led all 50 laps for a $10,000 victory on the Ultimate Battle of the Bluegrass Series.

“It feels good to turn it around,” said Overton, who scored his first victory since Florida Speedweeks by leading comfortably most of the way at the roundish, 3/8-mile track.

The World of Outlaws Craftsman Late Model Series regular took the checkers a half-straightaway ahead of runner-up Kent Robinson of Bloomington, Ind., in topping the modest 17-car field.

Tanner English of Benton, Ky., who started outside the polesitter Robinson and ran second most of the way, ended up third while consolation race winner Chad Stapleton of Edinburgh, Ind., and former track champion Jason Feger of Bloomington, Ill., rounded out the top five.

Overton’s first-lap move under Robinson and English proved to be the winning one as he took control after a brief side-by-side battle with English. He cruised through the race’s middle stages and kept Robinson in check in the final laps.

“I kind of figured it was going to be right there around the bottom, so I just wanted to go ahead and get out front and kind of set of a pace,” Overton said. “Right there at the end, I guess it was K-Rob coming. I was kind of in protecting mode. My crew guy Josh, he was telling me where to go.

“I said that’s what it takes is a whole team effort. We’ve had some terrible luck. It feels good to finally win one and maybe this’ll turn us around and get us off on the right foot.”

Robinson, who slipped back to fifth before going past Stapleton and Feger on the backstretch after a mid-race restart, put mild pressure on Overton in the final laps but couldn’t make a serious bid for the lead with his high-side charge.

“I just wasn’t good enough on the bottom,” said Robinson, who fought a loose-handling race car. “I tried to make the track a little bigger and moved up. It was just a little dusty up there, a little dirty, and I just couldn’t get (turn) four and get off of (turn) two with him. We gave it all we had, and that’s all we had right there, I know.”

Robinson, who took the second spot from English with about five laps remaining, set fast time in Saturday’s prelims but didn’t get rolling early in the main event

“I didn’t get a good start there,” he said. “To be honest, we just don’t have a lot of races under our belt in this car. It’s my fourth night in so just I didn’t really know what to change going into the feature. We just didn’t tighten up enough. We know what we need to do. We learned a lot.”

English battled Overton early and made an inside bid for the lead after an early restart, but he didn’t have the car to challenge the winner.

At the outset, “I knew when Overton showed up there on the inside, I knew something crazy had to happen,” English said. “Yeah, we just didn’t tighten up enough for the feature and the track kind of slipped up on us. We just got way too loose and fell back. I don’t know. We’ll learn from it and get better next time.

“Overton, he wasn’t making any mistakes, catching lapped cars just right and everything. (Traffic was) still a little bit tricky because this track’s so fast and you’re sideways the whole time. I don’t know. It was a good night. We’ll take it.”

The race was slowed by five cautions, including for Jason Jameson’s early retirement, a stalled Jared Bailey and a Troy Taylor spin at the top of the frontstretch with 10 laps remaining.

Notes: Overton’s previous victory came Feb. 7 in Lucas Oil Late Model Dirt Series at East Bay Raceway Park in Gibsonton, Fla. … He previously won on the Ultimate Battle of the Bluegrass Series last season at Virginia Motor Speedway in Jamaica, Va. … Eighth in World of Outlaws points, Overton entered the Dick Potts Memorial with just three top-five finishes since Florida Speedweeks. … English ran second for 42 of the 50 laps, but a blistered right rear tire hampered his effort, allowing Robinson to slip by for the runner-up spot after a late caution. ... Chad Stapleton was among a few drivers who missed Saturday’s preliminary action but showed up to race Sunday; the consolation race winner ran as high as third in the feature and ended up fourth at the checkers. … Several competitors in the Super Late Model event fielded Crate Late Models that compete in the track’s regular DIRTcar division, including track points leader Mike Staggs. … “I hate that not that many cars showed up,” Overton said, “but it’s a neat little place.”