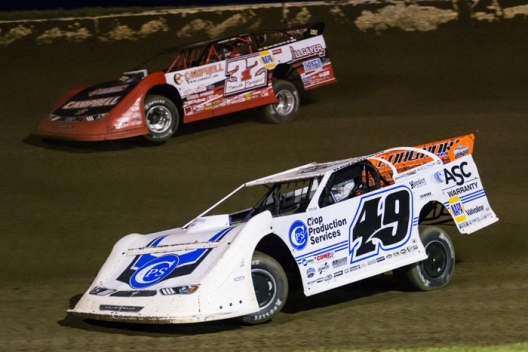 SPRING VALLEY, Minn. (May 19) — Jonathan Davenport’s debut at Deer Creek Speedway was a winning one, but Saturday's margin of victory in the 50-lap NAPA Auto Parts North Star Nationals ended up being a little too close for his comfort.

While Blairsville, Ga.’s Davenport took the lead for good on lap 33 when he passed Chad Simpson of Mount Vernon, Iowa, he had to survive a banzai, final-lap challenge from Bobby Pierce of Oakwood, Ill., to preserve his tour-leading sixth Lucas Oil Late Model Dirt Series triumph of the 2018 season.

Davenport, 34, watched Pierce surge ahead of him with a powerful slider into turn four with the checkered flag about to fly, but the 2015 Lucas Oil Series champion and current points leader crossed back underneath Pierce’s Dunn-Benson Motorsports XR1 Rocket off the corner and beat the 21-year-old sensation to the finish line by a mere 0.281 of a second for a $12,000 victory.

“I felt like we had a little better car than to make it that close at the end,” said Davenport, who experienced some trouble negotiating his Lance Landers-owned Longhorn car through lapped traffic during the race’s final circuits. “I was just trying to hit my marks out there … I went down the back straightaway and I saw my spotter and I knew the slider (from Pierce) was coming. I made sure I entered the corner a little softer so that way I could turn back to the inside of him.

“I saw him out of the corner of my eye, so I knew he was there. I was just hoping I could make it back to the line and not spin the tires.”

Simpson finished more than five seconds behind the winner in third place after starting from the pole position and leading laps 21-32 in his Brinkman Motorsports Black Diamond. Don O’Neal of Martinsville, Ind., advanced from the 16th starting spot to place fourth in Clint Bowyer’s Club 29 Race Car and eighth-starter Scott Bloomquist of Mooresburg, Tenn., completed the top five in his Sweet-Bloomquist mount.

Jimmy Mars of Menomonie, Wis., who led laps 1-20 after starting outside the front row, slipped back to finish seventh.

Making his first-ever start at Deer Creek in what also marked the Lucas Oil Series’s inaugural race in the state of Minnesota, Davenport found that the 3/8-mile oval owned by the Queensland family lived up to all the hype he had heard about it.

“Just an awesome facility,” Davenport said. “I definitely don’t mind driving way out here to a racetrack like this.”

It took Davenport about half the feature to really get rolling, however. He started fifth but didn’t break into second place until a lap-29 restart when he shot ahead of Mars and then began pressuring Simpson, who fell to Davenport’s assault on lap 33.

“Actually, I didn’t think it would be that fast, that early,” Davenport said. “They went out there and tilled (the surface) up a little bit. I didn’t think they was getting much of it, but it was real fast early so I was just trying to bide my time and maintain my tires because I figured it might tear ‘em up just a little bit with as much wheel-spin as we had and it was getting real dirty. So I just rode the first 10 (laps) and then I tried just pick ‘em off whenever I could.

“Me and (Simpson) got to racing for the lead there, throwing sliders back and forth, and I just happened to time it right to where I got the lead and got to pull out there. Then I kept watching (crew chief) Jason (Durham) and with like 10 to go he started closing the (single) sticks back up again and I was like, ‘Well, I ain’t even gotta look at the scoreboard. I probably know who that’s coming.’”

It was, of course, Pierce, who started sixth in his first-ever visit to Deer Creek. The first-year Lucas Oil Series regular followed Davenport past Simpson and, once Davenport’s pace was slowed by lapped traffic, drew close enough in the final circuits to mount a bid for victory.

“Right before we got in lapped traffic I pulled back off (to an edge over Pierce), and then I just couldn’t get by (Brandon) Sheppard,” Davenport said. “I tried to slide him one time and couldn’t clear him, and then I just patiently rode behind those other lapped cars.

“I knew on that last lap that Bobby would probably try to slide me right there, so I went ahead and kind of eased up my entry there and made sure I could get turned back across the racetrack.”

Pierce’s attempt to steal the race in dramatic fashion briefly put him in front of Davenport, but he carried too much momentum, bumped the outside wall off turn four with his car’s right-rear corner and was helpless to stop Davenport from charging back ahead on the inside.

“I think (the slower traffic) kind of helped me a little to catch (Davenport) because I stayed about three car lengths behind him for a long time, couldn’t really get to his bumper,” Pierce said. “When we got there (on Davenport), I was like, ‘Well, should I try it? Should I not?’ (The lapped cars) were kind of running two-wide … you kind of go running in there and you gotta dodge the lapped cars, so I was kind of just trying to be patient.

“I was hoping he would drop down to try pass one of them, maybe slide one of them, and then I would’ve been there to capitalize on it. But that’s one of the things when you race with this competition — he knew not to drop down because that probably could’ve happened. He just stayed patient on top, rolled right around there, and we got through ‘em.

“If I had five more laps maybe I could’ve set him up better because I kind of just went for it on that last corner and I knew I probably wasn’t gonna make it. I tried to pull off a last-lap slider but kind of got in the wall there. There wasn’t anything out of four, so I probably should’ve tried it in turn two.”

Pierce registered his second runner-up finish in as many nights, duplicating his effort in Friday’s Lucas Oil Series event at 141 Speedway in Francis Creek, Wis., another track that he ran for the first time in his career. It was also his fourth top-two finish in the last five Lucas Oil shows after his broke through for his first wins of the season on April 27-28 at his home state’s Tri-City Speedway in Pontoon Beach and Macon Speedway.

“I thought we had something for them mid-race when we passed Jimmy for the lead and led it for a while,” said Simpson, whose longtime car owners, Bud and Denise Brinkman, plan to retire at the end of the season. “But I knew once that caution come out and I seen J.D. and Pierce and them guys behind me, I knew I was a sitting duck.

“Them guys behind me kind of knew where I was and where they needed to be to be a little faster. It’s just that one time when being in the lead kind of got you a little bit. Before the caution I had that rhythm and everything was rolling really good.”

Two caution flags slowed the race, the first on lap six when Brent Larson of Lake Elmo, Minn., spun and the second on lap 29 when Mason Zeigler of Chalk Hill, Pa., experienced trouble.

Notes: Davenport’s 33rd career Lucas Oil Series win extended his lead in the tour’s standings to a healthy 310 points over Earl Pearson Jr. of Jacksonville, Fla., and Josh Richards of Shinnston, W.Va., who ended the night tied for second. … Richards had a dismal night, finishing 15th after mechanical trouble discovered following his heat forced him to forfeit the 10th starting spot in the A-main and start last in a backup car. … Chris Simpson of Oxford, Iowa, Chad’s younger brother, missed transferring to the feature by one spot in a B-main. … With the early postponement of the weekend’s World of Outlaws Craftsman Late Model Series doubleheader at Atomic Speedway in Alma, Ohio, Brandon Sheppard of New Berlin, Ill., towed to Deer Creek with his family-owned No. B5 and Brent Larson hauled back home to compete at one of his favorite tracks.