Information provided by: Dustin Jarrett, staff and series reports (last updated May 19, 10:02 am)
Pearson's all wet after outrunning Pierce at 141
Spring Shootout 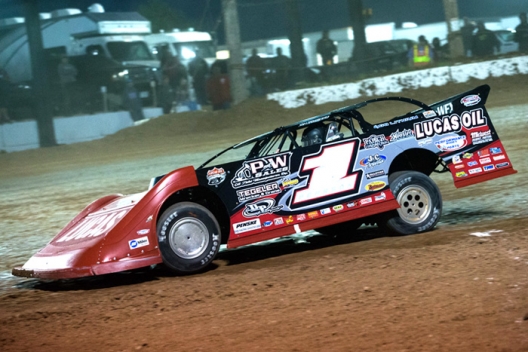 FRANCIS CREEK, Wis. — Earl Pearson Jr. was all wet on Friday night at 141 Speedway. He wouldn’t have wanted it any other way.

With the Lucas Oil Late Model Dirt Series making its debut at the 3/8-mile oval where winners often jump into the infield pond, the Jacksonville, Fla., driver overtook race-long leader Bobby Pierce on the 44th lap and led the final seven circuits for a $12,000 payday.

Pearson’s chilly jump into the water followed the four-time series champion’s second series victory of the season and 34th of his career as he took the checkers 1.056 seconds ahead of the pole-starting Pierce.

“What a night for Stuckey Enterprises and Black Diamond Chassis,” said the 46-year-old Pearson, who used the low groove to slip under Pierce exiting turn four for the winning move. “First time here and I never knew of the tradition to jump into the pond if you win the race, so it’s a little cold out here. But anyway, what a heckuva race.

“As cold as it is, I might’ve would’ve run second. But no, it’s all worth it," he addd with a smile. "Up there in victory lane, everybody’s cheering you on to go jump in the pond, I guess you’ve got to. Otherwise you’d be a butthole. Yeah, I’m going into the truck now and turning the heater on. I’m a little bit cold.”

Pierce settled for a runner-up finish while Hudson O’Neal of Martinsville, Ind., who held the second spot for the first 26 laps, ended up third. Ninth-starting Jimmy Mars of Menomonie, Wis., was fourth with 11th-starting Darrell Lanigan of Union, Ky., rounding out the top five.

Josh Richards of Shinnston, W.Va., started fifth and used the high groove to move up to second on lap 27 — nearly getting around Pierce on the race’s lone restart — but slipped back to finish seventh.

A veteran known for his proficiency on the bottom side of the track, Pearson stuck with that line from his seventh starting spot until the checkers, reaching the third spot on lap 28, taking second from Richards on lap 29 and stalking Pierce until he rubbed past the leader on the frontstretch on the 44th of 50 laps.

“It definitely fit my style of racing, right around the bottom on the uke tires," Pearson said. "On that (lap-26) restart, I got a couple of more (spots). Josh (Richards) tried the top there, and the top (groove) just wasn’t there after the first five or six laps, so I just stayed on the bottom.

“Everything fell my way there. I got up to Pierce there and (when the frontrunners) got to lapped traffic before that he was a little better than I was, but when we got to lapped traffic there (again) he slipped up one time. I got up under him. We got together, but, I mean, it’s racing. He’s with a heckuva team and he’s a good race car driver and he’ll win many more races.”

“I was hoping it’d be another night like Tri-City where we could (set) fast time, win the heat and win the feature, but Earl, he’s super-good on the bottom,” Pierce said. “I think he’s one of the best catfishers there is. He was really kind of in a league of his own. … I think right when (Pearson) passed me if I would’ve jumped up (to the top groove) there, maybe I could’ve made something work. But that top was really far around, especially in turn four.”

Except for a few laps just past halfway when Richards pulled alongside Pierce briefly, the young Illinois driver was in control all the way until Pearson moved into contention.

“I just got worse and worse as the race went, and I think Earl got better,” the 21-year-old Pierce said.  “I don’t know if the tires went away too bad. The right-rear felt a little glazed over, but I kind of just think that the little bit of traction that was still there, I was using every single bit of it. And then I think when my tires got hot, I think it just got worse and worse.

“Because on that restart where Josh (Richards) was on the top, I could dive in turn three, get off (turn) four like it was nothing. Just the longer the race went, I couldn’t hang on in the bottom, and I got really loose off corner two. I don’t know. It was a fast time. We’ve just gotta work on keeping it fast 50 laps on a track like that. Like I said, Earl was super-good on the bottom, and it’s tough to beat him when the track’s like that.”

O’Neal, the 17-year-old son of former series champion Don O’Neal, who finished eighth, regained third from Richards on the 34th lap but couldn’t keep up with the frontrunners. Pearson got by him on the low groove after the mid-race restart.

“What do you do? You live and you learn,” O’Neal said.”I’ll definitely put that in the memory bank to come back here next time. That bottom was just really, really good all night and never gave up.”

With two more weekend races coming up before a busy Memorial Day weekend at Lucas Oil Speedway’s Show-Me 100, the young Indiana driver was glad to get off to a good start.

Notes: Pearson dedicated the victory to the late Carlton Lamm, his former car owner with Dunn-Benson Motorsports, the team that now fields cars for Pierce. “We’ve got a lot of history there for Carlton Lamm,” Pearson said. “I’m sure he’s up there turning circles for me and Bobby there.”  … Series rookie Mason Zeigler of Chalk Hill, Pa., started outside the front row, dropped out of the top five after 18 laps and slipped back to finish 13th. … The race’s lone caution appeared on lap 26 when Luke Goedert spun inside turn three. … Twenty-one of 25 starters were running at the finish.