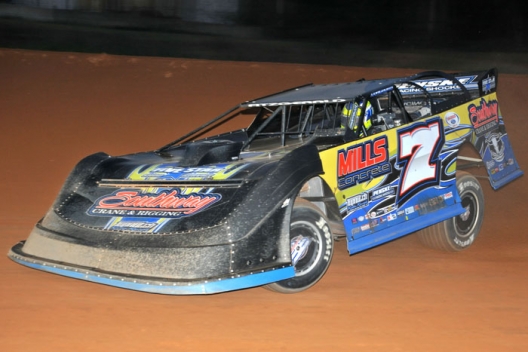 Phil Frye
Jason Fitzgerald scored his first NLMSCS victory of the season.
What won the race: Taking the lead with 10 laps remaining when Mark Whitener pitted with a flat tire, Jason Fitzgerald of Middleburg, Fla., pulled away from polesitter Travis Pennington to capture the Sunshine State 50 at Southern Raceway. Pennington finished second, with Tyler Thomason third. Fitzgerald earned $3,000 for his first NLMSCS triumph of the season.
Quotable: “I’ll take it,” said Fitzgerald. “I was watching (Mark Whitener) and (Travis) Pennington. It looked like they were going pretty hard early. I kept seeing his left front tire come up and we’ve been racing log enough to know what that is on a race track like this. I didn’t know if he was gonna be able to make it or not. I seen it and I felt bad for him ‘cause he’s my neighbor and my travel buddy and all that. But at least we can take this one back to the ‘Burg I guess.”
Key notes: Fitzgerald finished 1.645 seconds ahead of Pennington. ... Nine cars completed all 50 laps. ... Whitener of Middleburg, Fla., finished seventh after pitting to change his flat tire. ... Southern Raceway hosted the second night of the tour's weekend doubleheader. … It was the only tour stop at Southern this season. … Whitener won the first two series races, while Pennington of Stapleton, Ga., won Friday's race at Flomaton (Ala.) Speedway.
On the move: Micah McCall started 20th and finished 11th.
Winner's sponsors: Fitzgerald's Longhorn Chassis is sponsored by Southway Crane & Rigging, Fitz Factory and Mills Concrete.
Points chase: Entering the weekend, Mark Whitener of Middleburg, Fla., held the points lead over Jason Fitzgerald and Stanton Mills.
Car count: 22
Fast qualifier: Travis Pennington
Time: 14.922 seconds
Polesitter: Travis Pennington
Heat race winners: Garrett Lloyd, Stanton Mills
Next series race: May 26, East Alabama Motor Speedway (Phenix City, AL) $3,000
Editor's note: Results and race details are unofficial.