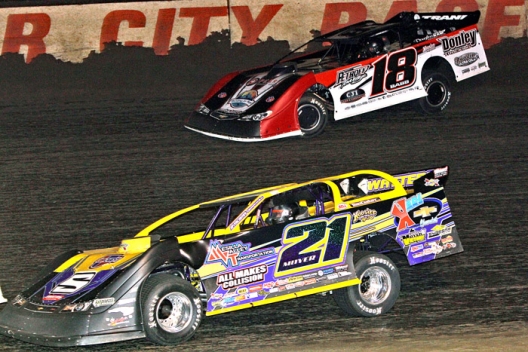 Stalking Billy Moyer for most of the Farmer City 74, the Moweaqua, Ill., driver’s banzai move on the high side on the final lap carried his No. 18 past Moyer’s No. 21 at the checkers for a $10,000 victory in an event co-sanctioned by the Sunoco American Late Model Series and MARS Racing Series.

The 44-year-old Babb won by inches over the 60-year-old Batesville, Ark., driver, Babb’s long-time racing buddy and National Dirt Late Model Hall of Famer who started on the pole position and commanded the race all but the final few feet of the long-distance event at the quarter-mile oval.

“I was trying to wait until the situation got right in traffic, and kept watching the flagman,” Babb said. “Hell, 1 out of a 100 of (last-ditch charges), it’s the only one that’s ever worked. Usually I’d go off the track and end up 10th, but we was running second so I figured I’d got for it.”

Moyer, stymied by low-running lapped traffic in the late portions of the event, fought off an attempt by Babb to make a high-side move with 17 laps remaining, but he couldn’t stop Babb’s last-ditch charge to the checkers.

“He let it hang out there,” said Moyer, who has battled Babb for countless laps over the last 20 seasons at Farmer City. “I couldn’t see it of course, but whatever he did back there, he had to make a move and it worked.”

Brian Shirley of Chatham, Ill., who briefly made it a three-wide backstretch battle with Moyer and Babb with 17 laps remaining, saw his two-race MARS winning streak end with a third-place finish while Tim Manville of Highland, Ill., and outside front-row starter Devin Gilpin of Columbus, Ind., rounded out the top five.

Moyer got the jump on Gilpin and cruised early, leading by nearly a straightaway by the time Babb took the second spot from Gilpin on lap 12. But by lap 25, Babb was closing in on the leader.

Two cautions before halfway slowed the action — and briefly allowed Gilpin to regain second from Babb on a restart — while most of the second half of the 74-lapper saw virtually every competitor locked down in the bottom groove with Moyer stuck behind Gordy Gundaker, the last driver on the lead lap.

On lap 57, Babb gave it a shot on the high side in turns three and four to pull briefly alongside Moyer on the frontstretch, but he nearly lost the second spot to Shirley before settling back nose-to-tail behind Moyer.

That formation held as the laps clicked down, but when the white flag waved, Babb again jumped to the high side, slapping the turn-three wall as he mustered enough momentum to get alongside Moyer exiting turn four and make the dramatic winning pass at the finish line.

“The track was pretty well locked down and everybody was just following the leader, and I tried the top in (turns) three and four several different times, and kept looking down at the third-place car and I had to get (back down) heading into (turn) one,” said Babb, who won his first race since wife Emalie gave birth to daughter Rennlee. “You’re always trying to drive defensively, but also trying to make the best line you can … I think Billy had the most traction down the straightaways, but he was a little snug in the corners, and we could roll through the corner real good and maybe was lacking on the straightaway. Anyhow, the night’s over, and we’re just tickled to death to come out of here with a win.”

Moyer knew his car was better with clear racetrack, but he didn’t have much racing room while facing slower traffic in the race’s late stages. He came out on the short end of yet another Moyer-Babb showdown at Farmer City.

“My car, I felt like it was really good when I didn’t have to run the guy in front of me’s line, when I could just momentum it and go it was awesome,” Moyer said.”I’m happy about that. It’s one of them deals … the joy of being behind the guy right there at the end.”

“He’s good at that stuff. I haven’t seen (the video) so I don’t know, but I seen him and watched him over the Dome over there (last December in St. Louis at the VP Racing Fuels Gateway Dirt Nationals) he was running on the wall like that. He can get up there and get it done like that. You’re just taking a chance on bending your car and rear end if you get your wheel in the wall. He just timed it all right and it worked out.”

Notes: Nearly three years ago, Babb also won his first race back after the birth of his older daughter, Finnlee. That victory was at Fairbury (Ill.) American Legion Speedway, where ALMS and MARS drivers head on Saturday for another $10,000-to-win feature. … Three cautions slowed the action Farmer City. The first appeared on lap 23 when Jose Parga slowed in turns one and two; Frank Heckenast Jr. spun in turn two on lap 31 and the third and final yellow came for Tanner English's turn-four spin on lap 32. … Ryan Unzicker of El Paso, Ill., the previous week’s regular-season winner at Farmer City, was battling Jimmy Mars for seventh in the second half of the race when he slipped over the backstretch berm and lost several spots. He finished 11th.