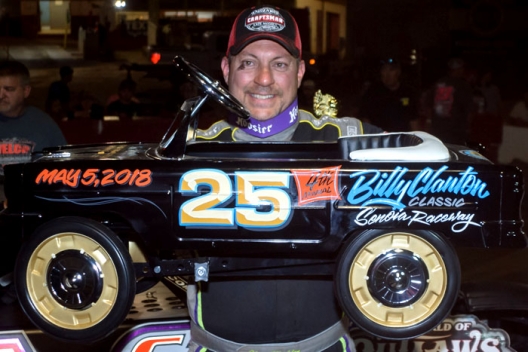 After all, the 42-year-old star from Gray Court, S.C., both loves the icy-slick 3/8-mile oval and was honored to capture an event held in memory of fellow WoO regular Shane Clanton’s late father for the fourth consecutive year.

“Man, what an awesome place,” Madden said after earning $10,000 for his second WoO triumph of 2018. “And what an awesome race to come here and win. Me and Shane’s like best friends out here on this tour, and he’s been so kind to me, him and his family. I just want to thank them from the bottom of our hearts for this race. It means a lot to me (to win it).”

Madden joined Zebulon, Ga.’s Clanton (2015 and ’16) and defending WoO champion Brandon Sheppard of New Berlin, Ill. (’17) as winners of the Billy Clanton Classic, which was part of the WoO schedule for the second straight season. It was also Madden’s second victory in four career starts on Senoia’s “gray gumbo” surface.

Starting from the pole position in his Barry Wright house car, Madden outgunned front-row mate Mike Marlar of Winfield, Tenn., who won the previous night’s WoO A-main at Cherokee Speedway in Gaffney, S.C., for the lead at the start of the evening’s feature and never looked back. He maintained firm control following three restarts and never let Michael Page of Douglasville, Ga., draw close enough to mount a serious bid after the rising regional talent reached second place with a lap-24 pass of Marlar.

Page, 35, settled for a career-best WoO finish of second in his Troy Baird-owned Stinger Chassis machine, crossing the finish line 1.265 seconds behind Madden. Dale McDowell of Chickamauga, Ga., advanced from the 17th starting spot to finish third in his brother Shane’s Sweet-Bloomquist car while Marlar slipped to a fourth-place finish in his Ronnie Delk-owned XR1 Rocket and Brandon Overton of Evans, Ga., improved one position to register a much-needed fifth-place result — his best WoO finish of the season — in the Dream Racing Longhorn.

Madden, who turns 43 on May 23, padded his WoO points lead with his eighth top-three finish in 11 events this season. With no one stepping up to truly make him sweat, his biggest challenge was negotiating slower machines.

“We were having to manage our line and try to hit the cars at the right time, the lapped traffic,” Madden said. “We was just a little bit snug there. I went just a little bit too far on my adjustment tonight, but we had a great race car.”

Madden dished out praise for his 17th career WoO triumph to his legendary chassis builder Barry Wright, whose work ethic during the WoO tripleheader that ended at Senoia amazed the victor.

“We want to thank Barry,” Madden commented. “We went back to the shop after that Lavonia (Speedway) deal (on Thursday night) … we got back to the shop at like 4 o’clock in the morning. That Barry stayed out there (working). I got up that morning and he went to bed at 10 o’clock. He built us a rearend to go in this thing — he worked all night and all morning long. You won’t find many people his age who give the effort that he puts forth to make this car run fast.”

Page, meanwhile, was thinking upset after charging forward from the 14th starting spot to second place in just 24 laps. But, with the race running caution-free from lap 19 to the finish, Page’s hopes of adding another national tour victory to his growing resume were effectively hampered by the lapped traffic he had to deal with almost relentlessly.

“Definitely (would’ve liked) a restart to just have a chance,” said Page, who won a Lucas Oil Late Model Dirt Series event last fall at Dixie Speedway in Woodstock, Ga. “The lapped cars just kept throwing stuff across the track and we had to change what we were doing every lap. I thought I was gonna catch (Madden) there for a minute, but then every time I did, I would just miss it a little bit … just a little bit off.”

Nevertheless, Page gained even more confidence with his performance against top-notch competition.

“We’re knocking on the door,” Page said. “We just gotta do a little better in the heat races, not get tore up and start better and we’ll be alright.”

The 51-year-old McDowell made an even bigger advance than Page, picking up 14 positions to finish third. He didn’t reach the spot until later in the race’s second half, leaving him more than 2 seconds behind Page at the checkered flag.

“I should’ve qualified better,” McDowell said. Hat’s off to all the Masseys and everybody who gets the track ready … I was able to race up through there. It was a lot of fun. I just wish I had more laps and then maybe I could’ve got up there and raced with those guys.”

The first of the race’s three caution flags flew on the opening lap when Tyler Erb of New Waverly, Texas, and Blake Spencer of St. Augustine, Fla., tangled in turn two. Erb restarted at the rear of the field and made a gallant charge back to eighth place before contact with Zach Leonhardi of Cartersville, Ga., on lap 15 sent him spinning into the turn-three wall and out of the race with terminal damage.

Sheppard triggered the final caution period on lap 19 when he slowed with left-front damage while running at the back end of the top 10. He returned and salvaged an 11th-place finish.

Notes: Madden recorded his fourth overall triumph of 2018. His previous win at Senoia came on April 23, 2016, in a Schaeffer’s Spring Nationals event. … Fifth-place finisher Brandon Overton’s previous best outing in WoO action this season was a sixth on Feb. 15 at Volusia Speedway Park in Barberville, Fla. … Shane Clanton started third but faded to a seventh-place finish in his father’s race. … Among the non-qualifiers was former WoO regular Clint Smith, who lives just down the road from Senoia Raceway and now races regularly at the track. He missed transferring by two spots in the first B-main. … With Chub Frank of Bear Lake, Pa., heading home after an opening-lap tangle knocked him out of Friday’s WoO feature at Cherokee, Senoia’s race marked the first WoO event he had not entered — aside from two 2009 World Finals programs when he was sidelined by injury — since the tour launched on Feb. 3, 2004.