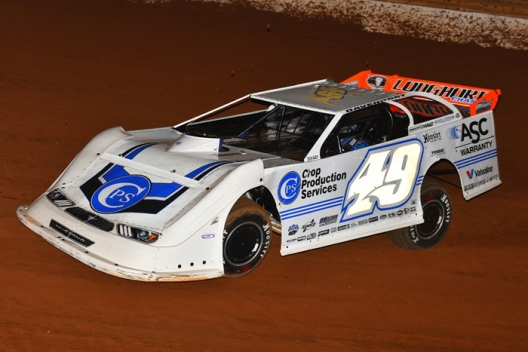 TAZEWELL, Tenn. — When Jimmy Owens steered his smoking car to the Tazewell Speedway infield Friday with five laps remaining, it was clear sailing for Jonathan Davenport the rest of the way.

But that doesn’t mean finishing off the $12,000 Lucas Oil Late Model Dirt Series victory was easy for the Blairsville, Ga., driver. During his victory lane interview with series announcer James Essex, Davenport was prepared to reel off a list of sponsors on his Lance Landers-owned car when he paused for a moment.

“I’ve gotta catch my breath,” the series points leader said with a smile. “You’ve gotta be up on the wheel at this place.”

The eighth-starting Davenport grabbed his series-leading fifth victory in front of the hillside fans at the high-banked quarter-mile oval in the Toyota Knoxville 50.

“I just love this place,” Davenport said. “Ever since the first time I ever came here, this thing is just so unique. There ain’t nothing like it. I wished we come back here two or three times a year.”

Tim McCreadie of Watertown, N.Y., finished 0.610 seconds behind as the runner-up while Don O'Neal of Martinsville, Ind., was third. Dennis Erb Jr. of Carpentersville, Ill., matched his best series finish of the season in fourth and Earl Pearson Jr. of Jacksonville, Fla., rounded out the top five.

Owens, the Newport, Tenn., driver who started outside the front row and led laps 1-45 in gunning for a series-leading sixth career victory at Tazewell, wasn’t the only top contender forced pitside. Reigning tour champion Josh Richards of Shinnston, W.Va., held the second spot early before being forced out with a broken driveshaft on lap 18.

“I hate for anybody to have bad luck, especially if you’re leading and running second there,” Davenport said in victory lane. “ I don’t know if I could’ve got by Josh or Jimmy there. They were really good. I don’t know how much (Owens) was saving; I knew I was saving just a little bit for the longer run just when we get to lapped traffic … I don’t know, this place is so fast. The top came, the top went away, the bottom was coming back there at the end. Damn I love this place.”

Davenport kept McCreadie in check over the final laps for his second career Lucas Oil victory at Tazewell.

“(Crew chief) Jason (Durham) was showing me signals,” Davenport said. “(McCreadie) was right on me there at the end. I couldn’t get off the bottom like I needed to. I think I hurt my tire just a little bit right after I got by Jimmy. I tried to get by a couple of lapped cars that were racing me really hard for some reason.”

Before and after the departure of Richards, McCreadie battled for position with Davenport, including a turn-two tussle when the cars came together. The timing didn’t work out in McCreadie’s favor when Richards retired.

“I didn’t have any clue anybody was coming and Josh got hung in the middle and got me pinned, and (Davenport) got me, and then the yellow comes right out and puts (Davenport) up there. We just didn’t have the breaks. I think we had a good enough car,” the runner-up said. “This is my best run here, so I’m happy. I just wish I could’ve heard (Davenport) and could’ve moved up. Because once we both got up in the same lane I thought we were the same.”

McCreadie isn’t as big of fan of Tazewell as Davenport, but was glad to put on a show nonetheless.

“It’s a shame for anybody that drops out,” he said. “This place, I know the fans love it, but it’s tough, it’s tough on everything. I don’t know how you make it racy but it’s just not very racy out there. What we’ve got going on is we’ve got 25 first-class drivers out there. That’s why there’s not more bad nights. We’ll keep coming as long as they have all the people.”

O’Neal scored his third top-five finish of the season.

“It was a good solid night for us,” he said. “At one point, I thought, we’re going to be OK, just a little too free. But man, it’s a good solid points night for us. That’s what we need. Hopefully we’ll go on tomorrow night at Florence (Speedway in Union, Ky.). I love that place and hope I can get us a win.”

The race was slowed by by five cautions, first for a lap-two spin but Dakotah Knuckles in turn two and then twice on lap six when Jason Jameson slowed with a flat left-front tire while running third and on the restart when Eric Webber, Carder Miller and Darrell Lanigan were among those getting tangled in turn two, ending Lanigan’s night.

Three-time series champion Scott Bloomquist slowed on lap 14 and Richards departed on lap 18 for the final slowdown in the 50-lapper.