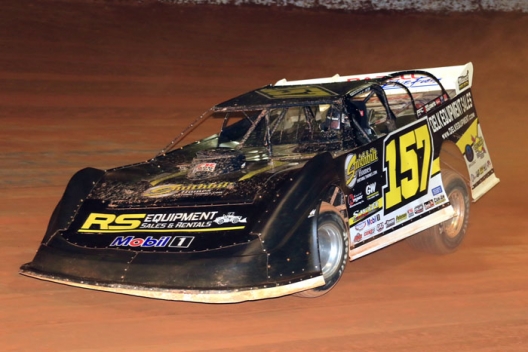 GAFFNEY, S.C. (May 4) — Ringing in the month of May behind the wheel of a new car gave Mike Marlar the boost he was seeking.

One night after debuting his Brucebilt-assembled XR1 Rocket machine with a runner-up finish, Marlar piloted the mount to his first World of Outlaws Craftsman Late Model Series victory of 2018, leading from flag-to-flag off the pole position to capture the $10,000 top prize in Friday’s 50-lap feature at Cherokee Speedway.

Marlar, 40, of Winfield, Tenn., pulled away following a lap-36 restart to take the checkered flag 3.446 seconds ahead of Zebulon, Ga.’s Shane Clanton, who overtook Chris Madden of Gray Court, S.C., when the green flag returned with 14 circuits to go but never drew close enough to threaten Marlar.

“Getting that first one (win) behind you is a big thing,” said Marlar, a first-time WoO regular who had a top finish of third plus two other top-five finishes in his eight starts before beginning the tour weekend tripleheader in the Southeast with a second-place run Thursday night at Lavonia (Ga.) Speedway. “It’s a confidence booster. It makes you know you’re doing the right things.”

Clanton spent the late stages more focused on holding off Madden, whose final-lap bid fell a mere 0.020 of a second short of carrying him past Clanton.

Marlar’s triumph did not come without one anxious moment, however. His scare materialized in the form of eighth-starter Brandon Overton of Evans, Ga., who, after surviving an opening-lap scramble in which original outside polesitter Johnny Pursley of Clover, S.C., spun around in turn two, began running the outside of the 3/8-mile oval midway through the race.

Overton used the top lane to pass Madden for second on lap 34 and moments later caught Marlar. The 27-year-old was in the process of sailing around Marlar for the lead when a caution flag flew for the stopped car driven by defending WoO champion Brandon Sheppard of New Berlin, Ill., whose Rocket Chassis house car was sidelined by a broken rear axle as he ran in ninth place.

While Overton’s strength became a moot point when he slowed on lap 36 with a flat right-rear tire and had to restart at the rear of the field after pitting his Dream Racing No. 116, Marlar knew he dodged a bullet.

“Well, I was sure glad for it,” Marlar said of the caution flag that negated what would have been Overton’s pass for the lead. “I lost one down there at Volusia (Speedway Park in Barberville, Fla.) like that early in the year so I hate it for him, but I guess he must’ve had a softer tire on or something because he could get out there in the crumbs. All of us guys on the harder stuff were pretty much committed to hugging that inside wall.

“It was fortunate for me that the caution come out. Then I kind of knew what to do the. The track had widened out a little bit so I was pretty well home free then.”

Clanton, 42, was unable to duplicate his victory in last year’s first-ever WoO event at Cherokee and grab his initial triumph of 2018 on the tour, but he continued knocking on the door to the winner’s circle. He was a runner-up for the third time in the last five WoO shows with his Capital Race Car.

“We was trying to get up there and race with Marlar,” said Clanton, who started fifth. “He took off after that last caution. We was keeping up with him early … our car’s pretty good. We just need to make a little more adjustments and we’ll be there.

“Anytime you get top-fives the wins will start coming. Hopefully we can just keep doing what we’re doing and more wins will come.”

The 42-year-old Madden regained sole possession of the WoO points lead with Sheppard’s 21st-place finish, but the driver whose Barry Wright house car is housed just 14 miles from the Cherokee facility wasn’t satisfied with a podium result at what is effectively his home track.

“We had a great race car earlier in the night,” said Madden, who has seven top-three finishes in 10 WoO A-mains this season. “We just missed our adjustments right there in the feature and wound up with a third-place car instead of a winning car.

“As long as we keep being consistent and running in the top three we’ll get our wins, but we kind of feel like we let one slip away tonight.”

Three caution flags slowed the feature, starting with the opening-lap incident involving, among others, Pursley, Overton and Chub Frank, who caught a piece of the tangle and saw his race end without completing an official circuit. Pursley had actually been penalized two positions by officials for jumping the original start from his outside pole position before getting turned around when the race resumed.

Sheppard and Overton triggered the A-main’s other caution flags on laps 34 and 36, respectively. Sheppard didn’t return — and to third in the WoO points standings behind Madden and Marlar after entering the event tied for the lead with Madden — while Overton soldiered on to a 14th-place finish.

Notes: Marlar’s victory was his second overall of 2018 (he previously won on Jan. 12 at Arizona Speedway near Phoenix) and the third of his career on the WoO tour. His other WoO triumphs came on April 12, 2014, at Tazewell (Tenn.) Speedway and May 14, 2017, at Duck River Raceway Park in Wheel, Tenn. … Marlar’s win was the fifth straight WoO feature to be captured in flag-to-flag fashion. The last lead change in a WoO A-main came on April 20 at Whynot Motorsports Park in Meridian, Miss., when Sheppard overtook Madden with nine laps remaining in the 50-lap headliner. … The seventh-place finish for Brent Dixon of Elberton, Ga., was two spots short of his career-best WoO outing: fifth, at Lavonia on both Thursday night and on May 3, 2014. … G.R. Smith of Cornelius, N.C., began his night by breaking a driveshaft during hot laps but made repairs and finished 18th in the feature. … Donald Bradsher of Burlington, N.C., didn’t qualify after hitting the backstretch wall during the third heat and limping into the pit area. … The tour made its only stop of 2018 in the state of South Carolina.