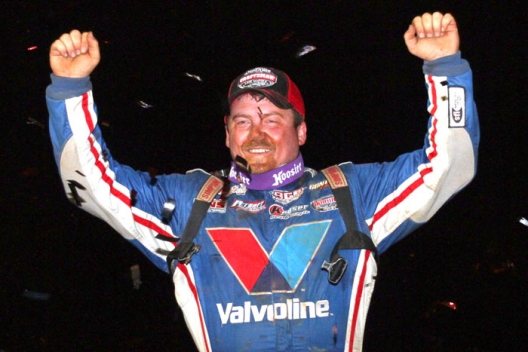 LAVONIA, Ga. — Outside front-row starter Brandon Sheppard’s flag-to-flag victory Thursday at Lavonia Speedway put him back into the thick of the series title chase quicker than he could’ve imagined.

The 25-year-old driver from New Berlin, Ill., repelled a late challenge from Mike Marlar for a $10,000 weeknight victory on a night when Chris Madden, who entered the race with a 40-point lead over Sheppard, retired at halfway with mechanical issues.

Madden’s woes — not unlike Sheppard’s DNF nine days earlier at Smoky Mountain Speedway in Maryville, Tenn. — moves Sheppard into a tie for the top spot on the World Racing Group’s national circuit.

“There’s a lot of ups and downs in this sport and I had some bad luck last week, Madden had some bad luck this week,” Sheppard told Lavonia’s huge weeknight crowd in victory lane. “It’s going to be tight for a long time, I’d say. We won’t get spread out until well past mid-season.

“It’s still early and we’ve just gotta keep working hard and digging. As long as we stay on the podium. We want to win every night, so as long as we can do that or come close, we’ll be all right in the end.”

Sheppard led comfortably most of the first half of the race — he had a 2.5-second margin at halfway — but Winfield, Tenn.’s Marlar turned up the heat in the final 15 laps, drawing close a few times, including when the leader made contact with the slower car of Cla Knight with six laps remaining.

Making his Lavonia debut, Sheppard was able to keep Marlar in check over the final laps for his series-leading third victory of the season.

Marlar, who made a fourth-to-second move after a mid-race restart, finished 0.549 seconds behind at the checkers as the two frontrunners pulled away from polesitter Devin Moran of Dresden, Ohio. Moran settled for a distant third with series rookie David Breazeale of Four Corners, Miss., advancing four positions to finish fourth. Brent Dixon of Elberton, Ga., was the top home-state finisher in fifth after holding the second spot for laps 13-15.

Madden started ninth and was running fifth when he came to a stop in turn four after completing 24 laps; fluid was leaking from his Barry Wright Race Cars house car and his race was over.

“My team, in my eyes I’ve got the best team out there. They never quit on me and I never quit on them. It just makes for a good combo, I guess,” he said.

“Lapped traffic was tricky. They would throw so much dust across the track that you couldn’t really get a lane on the outside of ‘em. I was trying to move around there and see where I could and couldn’t go and it just depended on how low the guy in front of me was getting and how much dust he was throwing up. I could run high two laps and the third lap it’d be cleaned up enough to make a really good (lap), then the next lap I’d come around it was really dirty again.”

Marlar was pleased with a second-place run in a new BruceBilt Performance Rocket Chassis.

“Brandon was good. I had a few little strong points. He could really enter (the corners) wide and turn back left really nice,” Marlar said. “But this week, I just want to say, we built us a new car. I’ve gotta thank Josh (Davis) and Jerry (Sprouse), man, them guys, we started Sunday with a frame. So I’ve got a really awesome crew with Josh and Jerry there.

“We struggled a little bit for a week or two … we were running an old car, and it’s been really good, it had like 90-something races and won a bunch of them with us, but you know, everybody’s got new brooms right now and they’re sweeping a little better.”

Moran’s preliminary efforts put him in contention for his first victory of the season as he matched his best WoO finish.

“We still didn’t get that in that we’re looking for. We were really good qualifying and heat-racing. We were decent for the feature for the track condition; we’ve just got a little bit better in this track condition,” Moran said. “We struggled so bad there a couple of weeks. If we keep (getting) these podium finishes we’ll stay up front.”

Four early cautions slowed the action with the final yellow at halfway. A 10th-running Timothy Culp got sideways on the first lap and retired while Blake Spencer and Brent Larson tangled on a lap-two restart. Shane Clanton and Tyler Erb drew a yellow while battling for sixth shortly after another attempted restart. On the fourth lap, a caution appeared when fifth-running G.R. Smith slowed on the backstretch.

The last slowdown came on lap 25 for Madden’s departure.

Notes: Sheppard earned his second WoO victory in Georgia; he won in 2017 at Senoia Raceway. … Fourteen drivers were on the lead lap and 18 were running at the finish. … Lavonia opened the first three-track weekend tripleheader on the WoO circuit in 2018 with Friday’s action set for Cherokee Speedway in Gaffney, S.C. and Saturday’s for Senoia. … Drivers failing to make the Lavonia feature lineup: Dustin Mitchell, Bubba Russell, J.R. Moseley and Donald McIntosh, who piloted the Florida-based Big Frog Motorsports ride. … In WoO’s only previous visit to Lavonia, Darrell Lanigan of Union, Ky., won exactly four years earlier (May 3, 2013), topping Tim McCreadie.