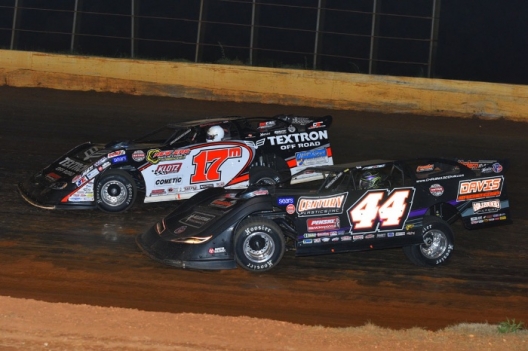 MARYVILLE, Tenn. (April 28) — Dale McDowell’s Tennessee Tipoff Classic did not get off to a good start. After suffering mechanical issues in the Friday portion of the weekend doubleheader, the Chickamauga, Ga., driver’s crew thrashed all day Saturday to repair extensive damage to the No. 17m. But their hard work paid off, as McDowell led flag-to-flag in the night’s feature for a $10,000 World of Outlaws Craftsman Late Model Series victory.

Winning his heat race and redrawing to start outside the front row of the 50-lap main event, McDowell shot past polesitter Brandon Sheppard of New Berlin, Ill., to take an early lead. As McDowell approached lapped traffic on lap 13, fourth-starting Chris Madden of Gray Court, S.C., started closing in on the race leader, with the pair distancing themselves from the rest of the field at the halfway mark.

As the laps ticked off, McDowell entered lapped traffic again late in the race, with a yellow flag waving on lap 47 to setup a three-lap shootout to the checkers. Unchallenged on the restart, McDowell cruised to victory lane, scoring his 12th career World of Outlaws victory and the fourth win of his 2018 campaign.

“Everybody worked hard on it last night and today,” McDowell said. “(Brother and crew chief) Shane (McDowell) had to go back and get some parts. That’s a big part of it. Last night we turned our transponder in, didn’t think we were going to make it. Everybody jumped in and fixed it.

“The racetrack got a little bit one-lane there, so they started going with the single-file restarts. I really didn’t want to catch (lapped traffic). I was just biding my time when I got to them, just in case something happened. You never know when you’re up on somebody. That leaves the second-place guy in control.”

Madden, the winner of Friday’s opener, settled for a runner-up finish. The South Carolina driver pulled ahead of Sheppard on a lap-two restart to run second early on. But despite his efforts to reel in the race leader, Madden was never able to seriously challenge McDowell out front.

“Considering last night, we’re real happy with tonight,” Sheppard said. “Dale and Madden both got a lot of laps around this place and I’ve only been here a few times. To be able to run third to them guys, it feels pretty good. We were just a little too snug there when the track rubbered up. But besides that, hats off to my team for getting the motor swapped in this thing and getting it turned around for us so we could make the race tonight.”

Notes: McDowell scored his second World of Outlaws victory of the season. His first came in Georgia-Florida Speedweeks action at Volusia Speedway Park in Barberville, Fla. … The race was slowed by three cautions. … The first yellow flag waved on lap two for debris on the frontstretch. …. Brandon Overton of Evans, Ga., slowed on the backstretch to draw a caution on lap 26. … A yellow flag flew on lap 47 when Morgan Bagley of Longview, Texas, slowed with a flat right-rear tire. … Devin Moran of Dresden, Ohio, was running seventh when he suffered a flat tire on the final lap, falling back to finish 22nd.