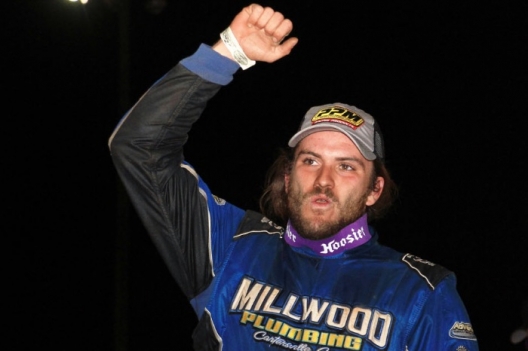 Richard Barnes
Tyler Millwood celebrates the biggest victory of his career.
What won the race: Tyler Millwood of Kingston, Ga., held off Ross Bailes over the final five circuits to secure a flag-to-flag victory worth $5,022 in Saturday night's 50-lap Ultimate Southeast and Carolina Clash-sanctioned Jack Starrette Memorial at Modoc Raceway. Millwood won an event co-sanctioned by the Carolina Clash Super Late Model Series and contested in memory of the well-known late car owner and sponsor.
Key notes: Millwood started on the pole and set the pace for the entire distance, but he had a scare with five laps to go. After he slid high in turns one and two trying to lap a slower car, Clover, S.C.'s Bailes slipped underneath him; contact between the two on the backstretch ripped up the left-front corner of Millwood's body and he then had to stop in turn four to avoid a multi-car tangle, but he was restored to the lead due to the caution and then held on to beat Bailes by 0.932 of a second despite the damage. ... The 27-year-old Millwood, racing one week after abandoning plans to follow the World of Outlaws Craftsman Late Model Series, registered the biggest victory of his Dirt Late Model career. It was his first-ever Ultimate Southeast triumph — though he won last year's series championship without capturing a feature — and first career Carolina Clash win. ... G.R. Smith ran second through the race's early stages but later spun out of third place due to a flat left-rear tire. He returned and finished ninth.
On the move: Michael Brown of Pageland, S.C., rallied from 23rd to finish 10th.
Points chase: Millwood left Modoc with 117 points to lead the Ultimate Southeast standings over Kyle Hardy (104), Zack Mitchell (92), Joey Coulter (90) and Michael Page (70); Brown ended the night with 445 points to lead the Clash standings over Bailes (395), Adam Yarbrough (377), David Yandle (348) and Doug Sanders (346).
Car count: 24
Fast qualifier: Cla Knight
Time: 16.810 seconds
Heat race winners: Anthony Sanders, Brent Dixon
Next series race: May 5, Laurens County Speedway (Laurens, SC) $4,014
Editor's note: Results and race details are unofficial.