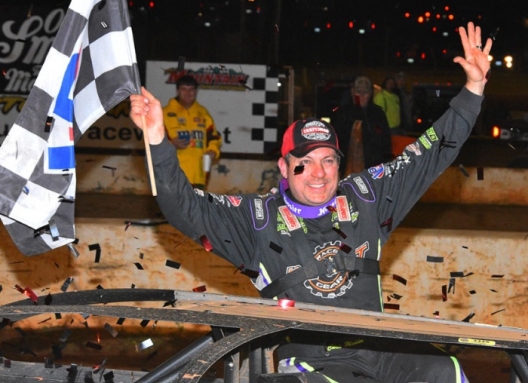 MARYVILLE, Tenn. (April 27) — In a dominating performance Friday night, Chris Madden of Gray Court, S.C., led all 50 laps of Smoky Mountain Speedway’s weekend opener, earning a $10,000 payday for his first World of Outlaws Craftsman Late Model Series victory of the season. With his victory, Madden moved to the top spot of the series points standings.

After clocking the night’s overall fast time, Madden was among Friday’s heat race winners. He redrew to start on the front row of the main event and charged to the lead at the drop of the green flag. The Barry Wright house car driver was dominant from the race’s start, setting a torrid pace out front. By lap 10 he held nearly a straightaway lead over fellow front-row starter Devin Moran of Dresden, Ohio.

Working his way through mid-race lapped traffic, Madden never slowed, continuing to stretch his lead over the field as Shane Clanton of Zebulon, Ga., overtook Moran to run a distant second. Never challenged for the lead, Madden took the checkers for his 16th career World of Outlaws victory and his third overall win of his 2018 campaign.

“We had a great race car tonight, all night,” Madden said in victory lane. “We were off just a little bit when we hot-lapped and we tuned on it and we got this dialed in where it needs to be. We could have run second last week both nights and we went for the win. It payed off in the long run and we got us a win tonight.”

Clanton, a former series winner at Smoky Mountain, finished second. Pulling ahead of Moran just shy of the halfway mark, the Outlaws veteran distanced himself from the late-race battle for third. But he was never able to gain any ground on the race leader, notching his second consecutive runner-up finish in WoO action.

(Moran) gave me a little bit more room than I thought he was going to on the bottom. We got by him without touching him. This racetrack’s pretty cool, high speed and fun to race on.”

Moran rounded out the podium in third, registering a season-best finish in WoO competition. Casey Roberts of Toccoa, Ga., improved from the ninth starting spot to run fourth in the Blount Motorsports ride and eighth-starting Shanon Buckingham of Morristown, Tenn., finished fifth

“We want to go out there and win, but Chris and all them guys they did a really good job,” Moran said. “We tried to hold (Clanton) off. It feels like a win for us. We’ve been struggling with the Outlaws. We’ve just got to put it all together and get a little bit better tomorrow night.”

Notes: The first yellow flag waved on lap two when WoO rookie contender Timothy Culp of Prattsville, Ark., slowed in turn three. He retired to the infield where he was evaluated by emergency personnel after being struck in the face by debris. Facing no apparent injuries, Culp plans to enter Saturday’s event. … Fourth-running Brandon Sheppard of New Berlin, Ill., drew a caution on lap three when he experienced terminal engine trouble. Forced to retire early to finish 22nd, Sheppard lost the series points lead to Madden. … Noticeably absent from the Smoky Mountain pit area were Billy Moyer Jr. and Rusty Schlenk. Forgoing the trip to Smoky Mountain to be home with his ailing infant daughter, Moyer will receive hardship points for the weekend’s events. Schlenk, meanwhile, announced Friday afternoon that he was abandoning his plans to chase the WoO circuit for the first time in his career after getting off to a slow start during Georgia-Florida Speedweeks and last week in Mississippi; he will return to running a regional schedule with his C.J. Rayburn-built equipment.