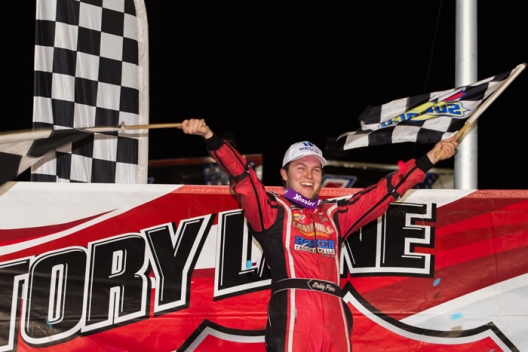 Competing just 12 days after team patriarch Carlton Lamm died at age 77, the Oakwood, Ill., driver — carrying a #RacingForBigC graphic on his No. 32 race car — dedicated his first victory with the team to the always-smiling car owner who touched so many in the racing community.

“It feels like it’s been a long time coming, but when you race with the Lucas series, these guys are the best there is,” said the 21-year-old Pierce, who scored his first series victory of the season and sixth of his career after joining Dunn-Benson during the off-season. “I really wanted to get that win for (Carlton Lamm), but I know he’s up there watching. Just a big thanks to everything the Lamms do.”

The polesitting Pierce ran unchallenged early at the 3/8-mile oval, stretching his lead to nearly four seconds over Kyle Bronson after a dozen laps. But when virtually every driver fell into the preferred lower groove in the second half of the race, Pierce survived a few tense moments behind slower cars as his pursuers knocked on the door.

Winning at one of his best tracks, Pierce took the checkers 0.286 seconds ahead of Tim McCreadie of Watertown, N.Y., while Jimmy Owens of Newport, Tenn., finished third. Bronson, of Brandon, Fla., gave up the second spot when he tested the outside groove on lap 31 and settled for fourth while Brian Shirley of Chatham, Ill., rounded out the top five.

Jonathan Davenport of Blairsville, Ga., lengthened his Lucas Oil points lead with a 14th-to-six run while title contenders Josh Richards of Shinnston, W.Va. (13th) and Scott Bloomquist of Mooresburg, Tenn. (12th) were mired in the pack.

Pierce, after patiently riding in the low groove behind slower cars, was glad to see the checkers fly so he could join the Dunn-Benson team in victory lane for a satisfying celebration.

“Man, that was the longest race I think I’ve ever ran. It was so nerve-wracking,” he said “I kind of wanted a caution to get away from the lapped cars, but I didn’t think anyone would have a chance around the outside of me because it was so crumbly up there.”

After some early-season struggles facing some unfamiliar tracks, Pierce’s chance to race in his home state at a track where he’s posted several victories — including on the UMP DIRTcar Summernationals, where he’s a three-time champion — was key to the $12,000 payday.

“I think it was crucial, really,” Pierce said. “Qualifying is where these races are won a lot of times. (In) hot laps I was pretty worried. We weren’t very good. (We) went out there and qualified and set fast time. I always say, if you set fast time, your night’s starting off 10 times better than if you’re starting in the second row.

“It’s just really tough, like I said, with this series. This group of guys that we’ve got running this year is very stout.”

McCreadie, who started eighth and was up to third after just six laps, finished second for his best series finish of the season and fourth straight top-five finish as he climbs back from a dismal start to the season.

Experimenting with the high groove while running third when he had a little breathing room mid-race, McCreadie knew he had to settle in the low groove behind Pierce and hope to find a way past. It never came.

“I tried when I was behind Bronson. I tried the middle in (turns) one and two,” said McCreadie. “It was just so crumby off of (turn) two and I never really went up there down there in (turn) four. At the beginning I was rolling up there. I thought, well, if these guys would just not swing all the way out to the wall I could get a good enough run in each corner to make some time. Unfortunately when the yellow came out it put be on the bottom (for the restart).”

Owens started third but slipped back to sixth early before finding his footing in the early laps.

"I was a little worried that our tires didn’t fire off the way I wanted to on the first takeoff,” Owens said. “We got another restart and got a good restart there and was able to make our way up to third.”

English retired immediately and Manville four laps later while O’Neal, pitting first to repair nosepiece damage and then again to change a flat left-front tire, soldiered on to finish two laps down in 24th, running most of the race on a left-front tire that went flat again.

Notes: Three of Pierce’s six Lucas Oil victories have come in Illinois (the other two in Macon). … His previous series victory came May 28, 2017, in the Show-Me 100 at Lucas Oil Speedway in Wheatland, Mo. … Scott Bloomquist, who finished first or second in the previous five series events, gave up his sixth starting position because he changed two tires just before the green flag dropped; he rallied to finish 12th. … Series rookie Mason Zeigler of Chalk Hill, Pa., was leading the second heat when he spun alone in turn four on the final lap; he took a provisional starting spot in the feature and finished 18th. … Nick Hoffman, a native of nearby, Belleville, Ill., started on the front row with Pierce but faded to 11th. … The series heads northeast to Macon (Ill.) Speedway on Saturday for the $12,000-to-win St. Louis U-Pic-A-Part 100, which is available live on pay-per-view at DirtonDirt.com.