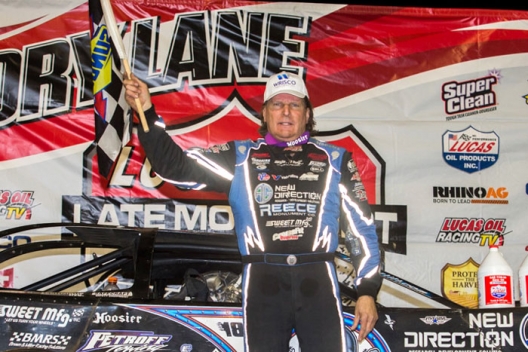 The 54-year-old Hall of Famer from Mooresburg, Tenn., was flawless in the 50-lap Lucas Oil Late Model Dirt Series-sanctioned Rumble by the River, leading all but the race’s first lap en route to his first-ever triumph at the sprawling half-mile fairgrounds oval in the central Pennsylvania mountains.

After vaulting his Sweet-Bloomquist machine past Jimmy Owens of Newport, Tenn., for the lead on lap two and maintaining firm command following five caution periods, Bloomquist became a big fan of the facility that hosted the Lucas Oil Series for the second consecutive year.

“It really is a great racetrack,” Bloomquist said after pocketing a $10,000 top prize for his second Lucas Oil Series win of the season and the 88th of his career. “I really enjoyed running on it. It had a little bit of crumbs on the track early … it’s got a lot of character. There’s a number of lanes around this place, but you could really sail that high line. I think I figured it out pretty good tonight.”

Aside from having Josh Richards of Shinnston, W.Va., briefly poke to the inside of Bloomquist in the corners shortly after the halfway point, the victor faced no serious challenge. The 30-year-old Richards restarted second behind Bloomquist after the A-main’s final caution flag flew on lap 48 but couldn’t make a significant bid for the lead and settled for runner-up status in his Best Performance Motorsports XR1 Rocket, 0.976 of a second in arrears of the winner.

Earl Pearson Jr. of Jacksonville, Fla., who started 10th, slipped past Tim McCreadie of Watertown, N.Y., for third on the lap-48 restart and claimed the final podium position by a hair of McCreadie. McCreadie had to be satisfied with a fourth-place finish after starting from the pole position and running second for more than half the distance in his Sweeteners Plus-backed Longhorn house car and Darrell Lanigan of Union, Ky., placed fifth in Clint Bowyer’s Club 29 Race Car after overtaking Bobby Pierce of Oakwood, Ill., on the lap-48 restart to crack the top five.

Lucas Oil Series points leader Jonathan Davenport of Blairsville, Ga., finished sixth after starting 18th because a bent nosepiece during heat action forced him to qualify through a B-main and Pierce slipped to seventh in the final rundown after climbing as high as fourth from the eighth starting spot.

Bloomquist appeared to have the race solidly under control for virtually the entire distance, building a half-straightaway advantage on several occasions. He was uncertain about precisely how dominant he was but nevertheless was confident he had the situation in hand.

“I wasn’t sure how much,” Bloomquist said when asked about his edge over his closest pursuer. “I couldn’t see anybody in the pits signaling me. I just know the car felt awful good, and I knew it was gonna be pretty hard for anybody to pass us. You just know when everything’s feeling pretty good and your car’s rotating nice and had good traction all night.

“It was really nice,” he continued. “Just good rotation, good traction. I just could really carry speed around that high line, but when we had to go to the bottom, we did, and could, and passed cars.”

The victory was Bloomquist’s fourth overall of 2018 (he also owns a World of Outlaws Craftsman Late Model Series triumph at Volusia Speedway Park in Barberville, Fla., and a Schaeffer's Spring Nationals score at Georgia's Senoia Raceway) and continued his post-Georgia-Florida Speedweeks surge. He ended February’s action mired in 14th in the Lucas Oil standings, 355 points out of the lead, but five races later he sits a menacing third in the standings, 115 points behind Davenport and just 40 behind second-place Richards.

“Speedweek was a little bit rough for us even though we come out of there with a win,” Bloomquist said. “We had some problems that we got home and got to the bottom of. Since we got that straightened out we haven’t run worse than second, so hopefully we keep this rolling.”

Indeed, Bloomquist has three wins and five runner-up finishes in his eight starts since the conclusion of Speedweeks.

Richards, who started third alongside Bloomquist, was hampered by the five caution flags that dotted the event. He reached second for the first time on lap 29 when he overtook McCreadie, ceded the spot to T-Mac on a lap-38 restart and finally wrestled it back on lap 47.

“We were really good on the long green runs,” Richards said. “The longer we would go I would actually start to stick a little bit better and they were starting to slide a little bit, and I could start to make ground. But the restarts, it took me a few laps to get going, so I really didn’t want to see them cautions at the end.

“We made some changes today and I felt really, really comfortable out there. If it would’ve gone caution free it might have been a different story, but we had a really good car and that’s all I could ask for.”

Pearson, 46, slid by Pierce for fourth on a lap-28 restart but wasn’t able to gain one more position until just two laps remained.

“Our car was pretty good at the beginning around the bottom and got tighter and tighter as the night went on,” Pearson said. “To start 10th on a big track like this and pass some really good cars and get up to third … for Black Diamond Chassis and the guys working on it, it’s been one heck of a year for us already.”

The race’s caution flags came on lap 17 for Owens, the lap-one leader who slowed with rear suspension trouble while running second; lap 18 for Austin Hubbard of Seaford, Del., who slowed on the homestretch; lap 38 for Gregg Satterlee of Indiana, Pa. (slow on backstretch) and on the restart for Don O’Neal of Martinsville, Ind. (slowed with front-end damage from bouncing in a turn-one hole while running sixth); and lap 48 for Dennis Erb Jr. of Carpentersville, Ill., who slowed with nosepiece damage.