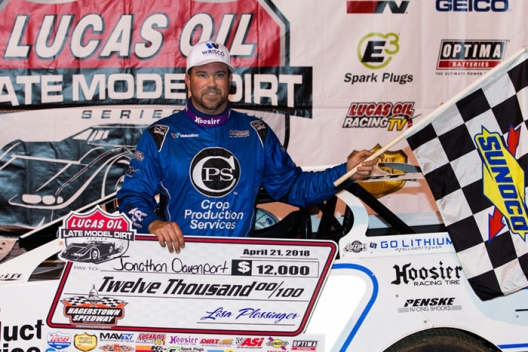 They never are, he pointed out.

“This place is challenging enough within itself,” said Davenport, who struggled in his two previous appearances at the half-mile oval.

The 34-year-old star from Blairsville, Ga., had his Lance Landers-owned Longhorn car purring perfectly this time, allowing him to roll off the pole position and lead the feature’s entire distance without facing a single serious challenge. Scott Bloomquist of Mooresburg, Tenn., ran in second place from lap three onward in his Sweet-Bloomquist machine, but he never got close enough to mount a bid for the top spot and finished 3.470 seconds behind the victor.

Tim McCreadie of Watertown, N.Y., advanced from the 15th starting spot to place fourth in his Sweeteners Plus-backed Longhorn house car and Lucas Oil Rookie of the Year contender Mason Zeigler of Chalk Hill, Pa., completed the top five in his father’s XR1 Rocket after starting ninth and reaching fifth place with a lap-41 pass of Indiana, Pa.’s Gregg Satterlee.

In a race slowed by just two caution flags — on laps 13 and 20 — Davenport maintained a steady edge of a half- to a full-straightaway over Bloomquist. The 2015 Lucas Oil Series champion and current points leader was informed of his advantage by a signaling crewman but didn’t let that information produce any complacency in him.

“You can never take that (size of a lead) for granted because it can change in a hurry,” Davenport said. “And I know how Scott is, and I know how I race … we can be saving our tires until the end, until the leader gets to lapped traffic. That’s when you pounce, you get your momentum, and you can move when he’s already stuck behind them.”

Davenport feared that slower traffic might be his undoing. He eventually had to change his strategy of dealing with them as the race wound down.

“My biggest challenge during the race was the lapped cars,” related Davenport, whose fast-time award and heat win set the stage for a sweep of the night’s program. “Man, I tried to be patient with them and let them sort themselves out, but it seemed like the more patient I was with them, the closer they’d get and the more they’d race one another.

“I don’t know if they never did look up and see the move-over flag or what, but finally there during that long green-flag run (from lap 20 to the finish) I lost my patience and I made a move down here because I thought it was time to go. I actually found a little bit of rubber (on the inside lane through turns three and four), so it actually helped me.”

One week after surviving a furious final-lap challenge from Bloomquist to register a $20,000 win in the Ultimate Southeast Super Late Model Series-sanctioned Aaron’s King of the Commonwealth at Virginia Motor Speedway in Jamaica, Va., Davenport handled the Hall of Famer much more handily for his Lucas Oil Series-leading fourth triumph of 2018 and the 31st of his career.

“That was a little too close for comfort last week,” said Davenport, who tallied his seventh win overall in his first season driving for Batesville, Ark.’s Landers. “I think we beat (Bloomquist) on tires last week, and this week we was all on the same tires. I’m just happy and confident enough in the car and the whole team now that we can definitely race with him.”

Davenport also erased his past frustration at Hagerstown with his first Lucas Oil Series win since February’s Georgia-Speedweeks finale at Bubba Raceway Park in Ocala, Fla.

“Me and (crew chief) Jason (Durham) were talking before hot laps about how I usually do here, and I said, ‘I usually suck here,’” said Davenport, whose previous Lucas Oil Series finishes at Hagerstown were 12th (2012) and fourth (’16). “He said, ‘Until tonight.’”

Bloomquist, 54, simply didn’t have the speed to stop Davenport’s domination. He overtook reigning Hagerstown Super Late Model champion Kyle Lee of Mercersburg, Pa., for second on lap three and unsuccessfully chased Davenport for the remainder of the distance.

“We just kind of tried something a little different here,” said Bloomquist, who started third. “We haven’t had a chance to do much testing lately and we’re just throwing a few things at the car, but we’ve run first or second the last eight or 10 shows (in fact he has two wins and five runner-up finishes in his last seven starts) and we got the car real close. We’re gonna get some testing done and get a little better.

“But Jonathan ran good. He just had a little bit better car tonight. I just felt like I was getting beat rotating the center of the corner and the exit. We’ve just got to work on getting more traction.”

Bare, making just his third start in Klinedinst’s car and his eight Super Late Model attempt overall after beginning to dabble in the top class with family-owned equipment late last year, was the Cinderella story of the night with his impressive performance. He passed Satterlee for third on lap 36 and actually put his car’s nose under Bloomquist in a bid for second with less than 10 laps remaining before losing some ground and surviving late pressure from a charging McCreadie to preserve the final spot on the podium.

“This is amazing,” Bare said. “When you come to think about it, these guys that are in front of me, they’re the best of the best. To be able to rub fenders with Scott Bloomquist, it wouldn’t be no different (feeling) if I won tonight.

“I think when I got into (Bloomquist) that one time (bidding for second), and I think he sped up there a little bit. Maybe next time we’ll just wait back and hopefully pass him clean.”

The race’s two caution flags were triggered by Jason Covert of York Haven, Pa., who stopped on the backstretch on lap 13, and Hudson O’Neal of Martinsville, Ind., who slowed on lap 20 due to a broken rear shock that resulted from contact with Bobby Pierce of Oakwood, Ill., the previous as he battled inside the top 10.

Notes: Davenport dedicated his victory to Carlton Lamm, Pierce’s Hall of Fame team owner who died on Monday at the age of 77. “We’re all racing with heavy hearts thinking about Big C,” Davenport said. “This one’s for him.” … Earl Pearson Jr. of Jacksonville, Fla., who won two Lucas Oil Series championships driving for Lamm, advanced from the 20th starting spot to finish sixth in the Black Diamond house car. He reached the position with just three laps remaining. … Defending Lucas Oil champion Josh Richards of Shinnston, W.Va., surprisingly struggled at a track he knows well, timing poorly and falling back on a provisional to start the feature from 23rd. He salvaged a 12th-place finish. … Trever Feathers of Winchester, Va., used the guaranteed starting spot he earned for winning Hagerstown’s March Ultimate Northeast event to start 25th in the feature. He briefly became the story of the race when he surged into sixth place on lap 22, but shortly thereafter terminal engine trouble forced him to retire and end up 21st in the final rundown. … Kyle Lee started from the outside pole after winning a heat and ran second for the feature’s first three laps before slowly slipping backward to a ninth-place finish. It was still a career-best Lucas Oil run for the 21-year-old driver. … Hudson O’Neal’s frustrating night began during the second heat when he fell from second place to a non-transferring fifth-place finish because he mistakenly thought the race was over after flashing under the white flag. He slowed off turn two and was passed by three cars before realizing the prelim wasn’t done. ... Davenport became the 11th different winner in as many Lucas Oil Series events at Hagerstown.