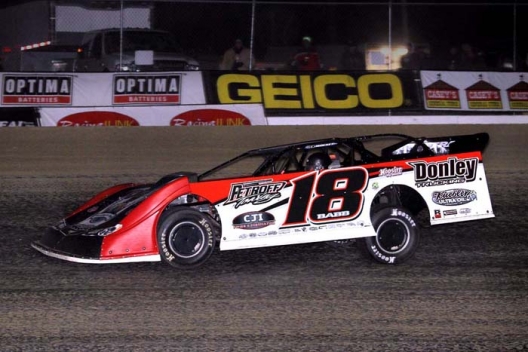 WEST BURLINGTON, Iowa — Shannon Babb knows when he heads to Iowa, he’ll have his hands full with the Brothers Simpson. With Chris and Chad Simpson chasing the Moweaqua, Ill., driver in Saturday’s Slocum 50 at 34 Raceway, Babb made sure to keep any pursuers in check at the 3/8-mile oval.

Babb made a few daring moves in traffic, twice making contact with slower cars while keeping his No. 18 out front en route to his $10,555 victory with the Lucas Oil Midwest LateModel Racing Association.

“Our car has been really good all night, but I’ll tell you what, any time you have the Simpson boys up there, they win about every time I’m here, so it was definitely tough to let them get in front of me. I knew I had to get back in front of ‘em. They’re awesome racers.”

Babb outdueled the polesitting Chad for the runner-up spot in the early laps, then made an outside move in turn four to overtake Chris and race toward his second career MLRA victory in a tribute event for late racer Brenton Slocum, who was killed in a tragic 2005 accident at the track.

“It was awesome that they reworked the track,” Babb said in victory lane. “It definitely made the first half of the (race) really racy top to bottom. I mean, I think we was three wide and I didn’t know where to run at. I got the top going in (turns) three and four and was able to make the pass (for the lead). It’s just really cool.”

Babb took the checkers comfortably ahead of Chris Simpson of Oxford, Iowa, and Chad Simpson of Mount Vernon, Iowa, while Billy Drake of Bloomington, Ill., nabbed the fourth spot. Dave Eckrich of Cosgrove, Iowa, rounded out the top five at the track now owned by Slocum 50 co-founders Brad Stevens and Jessi Mynatt.

The third-starting Chris Simpson zipped into the lead on the first lap by blitzing his brother and Babb with a low-side move in turn two, but Babb settled in and found the high groove that carried him into the lead. He had a few tight spots in traffic the rest of the way, squeezing between Jeff Roth and the frontstretch wall, bumping Cole Wells in turn three and making slight contact with Jason Feger in turn two in the second half of the race.

“It was just tough there in traffic at the end,” Babb said. “I knew where we was at, we just needed to stay there. I didn’t know if one of those (pursuers) was going to give me a slide job or what they’d do, but they treated me right and I’m just really happy to be here where we’re at.

“Any time you get in traffic like that, the air, it’s almost like we got to a block where I couldn’t go any further. So I kind of backed off them guys a little bit, then did get a run. I was trying to keep something in between me (and his pursuers). I didn’t know if they were right on me or where they were at, but I knew I was just kind of held up there and cruising — I felt like I was just creeping around there really slow. I knew for the win, anybody would do anything.”

Chris Simpson settled for a second-place finish after winning on the MLRA circuit a night earlier in Davenport, Iowa.

“Any time you can run top three or four with these guys, it’s a good night,” The runner-up said. “We took the lead there on the bottom and it’s hard to leave the bottom when you take the lead, but Shannon got me on the restart there. He just found the black (strip in the track) before I did. That’s all right. We had a helluva car and a helluva weekend.

“I saw Chad was diving underneath me. He raced me really clean, so I gotta thank him. He could’ve probably dove in there and tried to slide me if he wanted to. All in all, it’s a great weekend. Kudos to Brad and Jessi for the track. They did all they could. They went out there and farmed it and gave us some good laps there to take the lead and try and race on it. Kudos to those guys, this thing was as smooth as glass. I’ll be excited to come back.

“The biggest thing was, when (the track surface) takes rubber once, it’s usually going to take it again, no matter how much you (rework) it. We kinda had an idea that it was going to take rubber. I just figured it’d be later in the feature. All in all, Shannon, he’s one of the best in the country. He’s won anything and everything. So to be competitive with him … congrats to those guys. It’s been a good weekend.”

Chad Simpson took a few stabs at his brother late in the race before settling for third.

“Them lapped cars, they were holding (Chris Simpson) up a little bit and they were helping me where I could catch on him a little bit. There were a couple of spots where I was better than him, but then he was better than me. So it was kind of a tradeoff,” the third-place finisher said. “Once it rubbers up, you just can’t get out of that groove and you’ve just gotta fall in line. That’s when I was (taking) a couple of shots underneath Chris there, and he was staying in the rubber and I was trying to get under the rubber and at least get by him. But once it latches up like that you kind of gotta get in the groove and stay there.”

Notes: Babb’s previous MLRA victory came May 11, 2008, at Lucas Oil Speedway in Wheatland, Mo., a $40,000 victory co-sanctioned by the Lucas Oil Late Model Dirt Series. … “I can’t say enough about the Slocum 50, it meant a lot to me to come up here and compete … I knew Brent and all them guys,” Babb said in victory lane. … Sixth-place finisher Ryan Unzicker of El Paso, Ill., a former race winner, ran as high as third early in the race before slipping back. … Roederer’s Pit Stop was the race’s presenting sponsor.