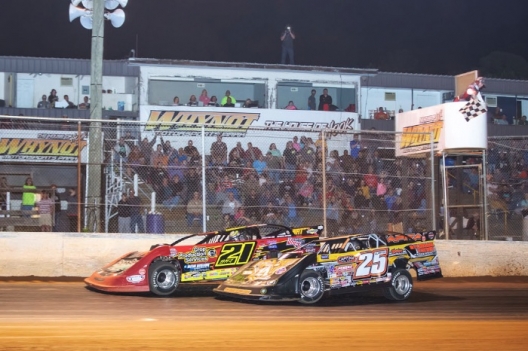 MERIDIAN, Miss. — Billy Moyer Jr. picked up an emotional win Saturday night at Whynot Motorsports Park. Just hours after getting news that his newborn daughter Hallie — still in the hospital after being born “a little early” on March 8 according to Moyer’s Twitter page — was battling complications, Moyer raced to his third career World of Outlaws Craftsman Late Model Series victory.

Leading all 50 laps from outside the front row, Moyer Jr., of Batesville, Ark., held off a furious charge from Shane Clanton of Zebulon, Ga., who finished a scant .064 of a second back in second, to win the second night of the Queen City Shootout. Chris Madden of Gray Court, S.C., finished in their tracks in third, while Mike Marlar of Winfield, Tenn., rallied from 28th to fourth. Brandon Sheppard of New Berlin, Ill., Friday’s winner, finished fifth.

Moyer Jr., who pocketed $10,000 for the win, readily admitted afterwards that his thoughts were a million miles away.

“Man they was with me tonight. That’s all I can say. I wanted to win … trying to make a living here but I need to get back to Arkansas as quick as I can.”

The winner needed all the focus he could muster as he tried to turn back Clanton’s advances. The trio ran within inches of each other over the final five laps, Moyer Jr., trying to stave off repeated challenged, Clanton and Madden trying to steal a victory on the final lap.

“I was blocking them,” said Moyer Jr. “They’d do the same thing. Them guys show me respect. Man we won and I got Gary and Brian and Spencer over there working really hard for me. Really on that last lap I was just blocking them. They cut me some slack there and I appreciate that and it’s just nice racing with guys like those two that are respectful and I just can’t say enough about my car.”

Madden moved into the second position on lap 20 and pursued Moyer Jr. throughout the second half of the race. But as the laps wound down, Madden inched closer. Feeling the pressure, Moyer Jr. became a defensive driver, his red and yellow No. 21 taking up lots of space on the 3/8-mile oval. That gave the fourth-starting Clanton shot at the end.

“Chris was doing all he could to win the race,” said Clanton. “He done all he could to get by him and Moyer went to block him. It just give me the opportunity to get to the bottom and I took Chris’s line then and he hit me a little bit. But it’s alright. We’re going for the win.”

Madden was well within striking distance if either Moyer Jr. or Clanton made a mistake, though if either of the leaders made a miscue, it’s likely all three of the close-running trio would’ve been swept up.

“It don’t look like we can do no better than third,” said Madden. “We just keep going for the win there. We come to win the races, not to run second. We took a shot at him there and if he wouldn’t have moved up on me we could’ve completed the pass. Maybe I should have done it a lap or two earlier. It just kinda killed my momentum and give the whole open for Shane there to get back into second.

“Overall we had a great race car all weekend. We started 12th tonight and made it up there to at least battle for the lead for a little while. I think we can take this momentum we’ve got going here in our new ride and at least build on it and maybe it’ll play out good for us at the end of the year.”

Notes: All 23 finishers were on the lead lap. … After an outstanding run on Friday night, Chub Frank of Bear Lake., Pa., slapped the turn three wall bringing out the first caution on lap 12. … The race was slowed by four cautions: Frank’s crash on lap 12; Rick Eckert’s spin on lap 18; Timothy Culp slowing to exit on lap 23; and Neil Baggett doing the same on lap 36. … Both Baggett and Brian Rickman finished with identical qualifying times of 12.271 seconds, a new track record. Baggett was the first to turn the quick lap. … Clanton competed with a swollen right wrist after it got caught in the steering wheel during his first-lap wreck on Friday. ... Moyer Jr. gave a sincere thank you to the Whynot crowd, along with an unwarranted apology for letting his emotions show. “I’m not on no soap box here,” he said. “I’m a pretty emotional guy. I’m just ready to get home. I glad we got some money to go home.” … After finishing third for the second straight night Madden felt he could’ve done a little better. “We’re fine-tuning right now,” he said. “If I had it to do all over again I could do a little bit different tonight and be really good. But overall we had a great racecar.”