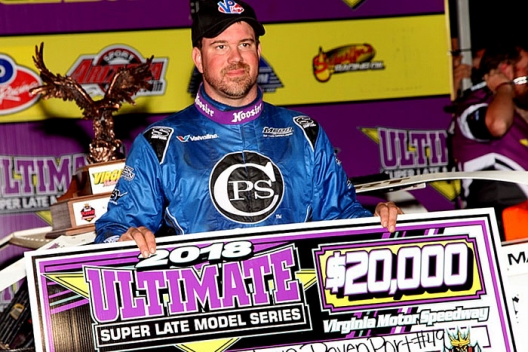 JAMAICA, Va. (April 14) — Jonathan Davenport sensed something about Virginia Motor Speedway’s surface wasn’t quite what he had come to expect on Saturday night.

So the 34-year-old star from Blairsville, Ga., and his Lance Landers Racing team played riverboat gambler for the Aaron’s King of the Commonwealth feature — and after 60 laps of competition, it paid off to the tune of a flag-to-flag victory worth $20,000 in an event co-sanctioned by the Ultimate Super Late Model Series’s Southeast, Northeast and Battle of the Bluegrass regional tours.

Davenport had to survive a furious final-lap challenge from Scott Bloomquist of Mooresburg, Tenn., with his Longhorn car’s softer-compound right-rear tire giving up to secure the hefty first-place prize, but he had enough rubber left to capture the King of the Commonwealth trophy for the second time in his career. He previously won the half-mile oval’s spring special in 2014 when it was sanctioned by the defunct National Dirt Racing League and also worth $20,000.

“Me and (team engineer) Kevin (Rumley) been here enough, so we know what to put on (for tires),” said Davenport, who had Rumley as his crew chief for his ’14 VMS triumph driving Rumley’s father Lee Roy’s iconic No. 6 car. “But we looked at some tires after the B-main and even after our heats and (the surface) just didn’t do what it normally does to ‘em, so we just decided to gamble a little bit and roll the dice and thank goodness it worked out.”

Bloomquist, 54, regained second place from Chris Madden of Gray Court, S.C., on lap 55 and ran down Davenport to mount a last-ditch bid to steal the checkered flag. The Hall of Famer was able to slide to the outside of Davenport rounding turns three and four on the final lap but lost traction and settled for a $10,000 runner-up finish in his Sweet-Bloomquist machine, a couple car lengths behind the victor.

Madden, who overtook Bloomquist for second on a lap-36 restart, finished a close third in his Barry Wright house car. He was hampered in the race’s late stages by a carburetor breather that came loose and caused his vehicle’s engine to run erratically.

Tim McCreadie of Watertown, N.Y., advanced from the 15th starting spot to finish a fast-closing fourth in the Sweeteners Plus-backed Longhorn house, flashing under the checkered flag in close formation with the top-three finishers after erasing a near straightaway deficit he had to them upon grabbing fourth from Austin Hubbard of Seaford, Del., on lap 45. Brandon Overton of Evans, Ga., who won last year’s King of the Commonwealth, was just a bit farther back in fifth place at the race’s conclusion after starting 16th in the Dream Racing Longhorn mount.

Davenport’s decision to bolt a softer 1350-compound Hoosier tire on his car’s right-rear corner rather than the 70-compound Hoosier that was the overwhelming choice of the field prompted him to seize the initiative at the start of the A-main. He came off the outside of the front row to outgun the polesitting Bloomquist when the initial green flag flew — just the launch he knew he needed to enhance his hopes for victory.

“I was really good in clean air,” said Davenport, who was afforded the opportunity to enter VMS’s big-money show after rain caused a morning cancellation of Saturday night’s scheduled Lucas Oil Late Model Dirt Series event at Brownstown (Ind.) Speedway. “That was the key — getting a good start and getting out front. I could set my own pace and I didn’t have to abuse my tire too much.”

As Bloomquist chased Davenport for the race’s first 36 laps, the leader strategized to keep himself away from lapped traffic — and thus out of a troublesome position — as best he could.

“It was kind of a chess game on how hard to go until I got to ‘em,” Davenport said of the slower cars. “I was trying to go enough to get me a little bit of space between me and Scott once I caught ‘em, but I didn’t want to go too hard and catch ‘em too fast.

“When a lapped car was in front of me it was would blow just enough grit that I couldn’t find the rubber (lane in the track) as good as I could when I was out there by myself … I’d just get freer and freer.”

Though Davenport knew Bloomquist was breathing down his rear bumper on the final circuit, he was able to hang on for the richest of his six triumphs since becoming Lance Landers’s driver for the 2017 season.

“There at the end it got pretty close,” said Davenport, who drove a Longhorn car he debuted the previous night in a Lucas Oil Late Model Dirt Series event at Atomic Speedway in Alma, Ohio. “I was struggling there. My right-rear was completely gone.”

Bloomquist certainly noticed that Davenport was running at less than 100 percent effectiveness as the race wound down. The veteran didn’t have sufficient time to take advantage of his Lucas Oil Series rival’s handicap, however.

“It was more a tire deal,” Bloomquist said. “We elected to run the hard tire like most of the field did and Jonathan ran a softer right-rear tire and it fired (at the initial start). He got the lead and managed to make it.  I didn’t think he’d make it with the tire he ran, but he made it. It’s still got rubber left.

“Normally the track gets a lot more abrasive and works on tires a little bit more, but right there at the end I think you could see he was fading and having some trouble. It would’ve been nice if it was 70 laps, or 65 laps, but it’s over. You live and learn. I’d say if we had a do-over we’d run a soft (right-rear) too.”

In the final analysis, Bloomquist felt his nearly 20-lap stint running in third behind Madden likely played the biggest role in his defeat.

“That really killed us, having to stay behind him and really find an opening to get by him again,” Bloomquist said when asked about ceding second to Madden on the lap-36 restart. “Once we got to second we got to Jonathan pretty quick, and if we didn’t have to spend that whole time trying to get back by Chris … who knows?”

“There was definitely one time in the race I thought we had the car to beat,” said Madden, who started third. “Before we had the first caution (on lap 19) we were better through one and two than Scott was, and I think Jonathan was done at that time. There was one part of the race where (Davenport’s) tire had quit … right when we had that first caution.”

The carburetor breather issue that cropped up shortly after Madden took second from Bloomquist caused an engine stumble that prevented him for getting “through the corner like we needed to,” but he acknowledged that Davenport made a risky decision work and circumstances helped keep J.D. in command.

“Everything just fell his way to make that tire work tonight,” said Madden, who headed to VMS late Friday afternoon from Farmer City (Ill.) Raceway after the track’s scheduled World of Outlaws Craftsman Late Model Series Illini 100 weekend was washed out. “The cautions fell perfect for him so he didn’t get in lapped traffic too much … he took a gamble and it paid off for him.”

The race’s two caution flags flew on lap 19 for Tyler Erb of New Waverly, Texas, who slowed on the homestretch, and lap 36 for Rick Eckert of York, Pa., who slowed with what he thought might be a tire problem but found was actually a bent front end from lap-19 restart contact with Gregg Satterlee of Indiana, Pa., that caused him to fall from sixth place to 14th in a single circuit.

Notes: Davenport recorded his 10th career Ultimate Southeast Series triumph. … Sixth-place Austin Hubbard was the highest-finishing driver who doesn’t plan to follow a national tour this season. … The event’s 56-car field was up significantly from last year’s 34-car King of the Commonwealth turnout. And according to Ultimate Southeast Series director Kelley Carlton, it was the largest field in the circuit’s history. … Provisional starter Zack Mitchell of Woodruff, S.C., drove Floridian Ivedent Lloyd Jr.’s car in the feature after his own mount was damaged in a qualifying incident. ... The feature field hit the track for pace laps at 10:50 p.m. ... Virginia Motor Speedway opened for the first time in 2018 with the first of two $20,000-to-win Super Late Model events scheduled at the half-mile this season. The Ultimate Series also sanctions the 42nd annual USA 100 on June 16.