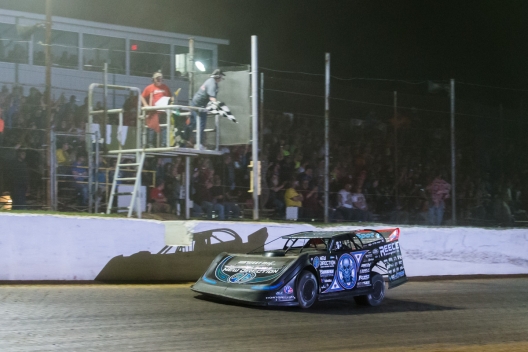 It was a perfect night for Bloomquist, who lined up on the front row of Friday’s feature after clocking the overall fast time and winning the third heat race. Charging to the front of the field at the drop of the green flag, Bloomquist dominated the first half of the main event, with multiple cautions allowing him to maintain his commanding lead as he pulled ahead on restarts.

With 10 laps remaining, Bloomquist sailed over the field, only to make his way into lapped traffic a few circuits later. His momentum slowed, O’Neal began reeling in the race leader with just a couple of laps remaining but was never able to seriously challenge for the lead. Bloomquist went on to score his 87th career Lucas Oil Series victory and first of the 2018 season.

“We had a good night,” Bloomquist said in victory lane. “We started out good. We qualified good, won our heat race. We led every lap. That’s what we came here to do. The track got pretty slick and blacked off and the tires were a little soft for the condition of the racetrack. But that’s what the tire rule was. Everybody had to live with it. We just elected there at the end to get up high and let it sail up high. But the car got through traffic pretty good too.

“I just knew I needed to pay attention to what was going on around me and it should be OK. And that’s the way it turned out. This Sweet-Bloomquist car was sweet.”

O’Neal finished runner-up at the checkered flag, notching his second podium finish of the season. Battling third-starting Tim McCreadie of Watertown, N.Y., for the second-place spot throughout the race, the Clint Bowyer Racing pilot never lost his position among the top-three front runners. But unable to capitalize in late-race traffic, O’Neal finished second in the Buckeye Spring 50 for the second straight year.

“It was a good, solid run,” O’Neal said. “Definitely not what we wanted, but the Zero car was just better than we was, especially in clean traffic. My team’s been working hard and we’re getting closer. Hopefully here before long we’ll get this Peak car in victory lane.”

After running as high as second, McCreadie rounded out the podium in third, rebounding from a disappointing performance in the tour’s March events at Boyd’s Speedway in Ringgold, Ga., and East Alabama Motor Speedway in Phenix City. Charging from the 12th starting spot, Brandon Sheppard of New Berlin, Ill., finished fourth, with Jonathan Davenport of Blairsville, Ga., rallying from the 23rd starting position to round out the top five.

“It’s nice to be out here in the front,” McCreadie said after the race. “We’ve been searching for some things since they kind of massaged the rules a little bit. They changed a bunch of stuff and kind of made us have to change our entire program. We’ve done that now and hopefully it will start to show.

“I wasn’t very good at restarts. I think I got lucky a couple of times the way (Bloomquist) started the race. It got us where I could try to slide. It takes me a while to get going. But that’s OK. The big money shows, hopefully we’ll be better at the end.”

Notes: In its first 12 events of 2018, Bloomquist marked the tour’s seventh different winner. … The first yellow flag waved on lap four when Tyler Carpenter got into the turn-four wall. … A yellow flag waved on lap 14 when Dave Hess Jr. slowed in turn two. … Hudson O’Neal drew a caution on lap 17 when he slowed with a flat tire. … Eighth-running Earl Pearson Jr. spun in front of the field on the ensuing restart, collecting Darrell Lanigan. ... A yellow flag flew on lap 20 when Kyle Bronson spun in turn three. … Frank Heckenast Jr. spun on the frontstretch to draw a caution on lap 27. …  Leaving Farmer City (Ill.) Raceway shortly after the World of Outlaws Craftsman Late Model Series doubleheader was rained out, fourth-place finisher Brandon Sheppard and the Rocket house car team arrived at Atomic just in time for heat races. Devin Moran was among other WoO competitors joining the field at Atomic following the rain out.