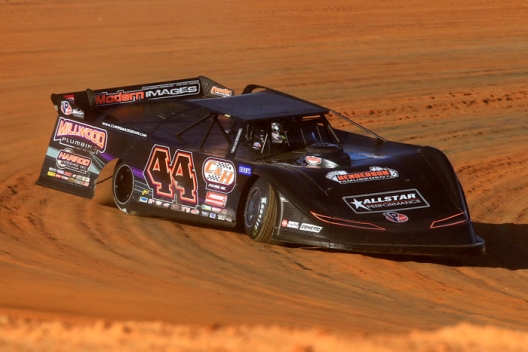 FAYETTEVILLE, N.C. — Chris Madden’s memories of Fayetteville Motor Speedway are mostly of chasing other drivers around the track. He was glad to have a different experience Saturday at the 4/10-mile oval during the 10th annual Ed Gibbons Memorial.

The 42-year-old driver from Gray Court, S.C., led all 50 laps of a caution-plagued feature for a $10,000 payday on the Carolina Clash Super Late Model Series. The polesitting Madden kept any challengers in check en route to his second victory of the season.

Madden, who won his ninth career Carolina Clash feature, took the checkers 1.722 seconds ahead of runner-up Michael Brown of Pageland, S.C., while 10th-starting Justin Williams of Shipman, Va., finished third. Johnny Pursley of Clover, S.C., and Donald Bradsher of Burlington, N.C., rounded out the top five, but two of Madden’s toughest challengers weren’t in contention at the finish.

Madden was aware that he, too, could’ve run into problems on a track where restarts and tire wear are among the concerns. He dodged a multi-car crash midway through the race.

“We had to watch our tire situation and not put ourself in a position where we had to run real hard if we didn’t need to,” Madden said.

Pierce got closest to Madden before a caution with 11 laps remaining, but he knew something mechanical was going wrong in the race’s late stages.

“I felt it going away the caution before the last one, I could kind of hear something,” Pierce said. “Then the last caution it kind of sounded worse, and it sounded like something was loose in there. In the middle of (turns) one and two there something snapped, I guess. …

“It seemed like I could catch (Madden) on the long runs, so I didn’t need the cautions. But, you know, I’m pretty happy with how the car was.”

Brown was the benefactor of Pierce’s departure, and he felt fortunate to avoid problems in a race with so many yellow flags.

“Those restarts here are very, very, very treacherous,” Brown said. “One start it’ll go your way, the next start you don’t know where you’re doing to end up. But we had an awesome car. The crew gave me the best car we’ve probably had here in a race, honestly.”

Madden was glad to win a race that honored one of the best-ever Dirt Late Model drivers from the Carolinas in Gibbons, the 2001 Carolina Clash champion who died in a 2009 traffic accident at the age of 46.

“He was a super guy, a really respectful guy,” Madden said. “I thought a lot of Ed and got to race with him some in my time coming up. It’s just a privilege to be here tonight to (win) this race tonight. We just want to thank the Gibbons family for keeping this memorial race for Ed going on.”

Notes: The track announced that Dunn-Benson Motorsports founder Carlton Lamm was hospitalized in Raleigh, N.C., after a medical emergency. No specific details were revealed. … The 50-lapper was slowed by multiple cautions, including five in the first 11 laps. The most serious yellow was for Dale Arnold’s rollover accident on the backstretch on the second lap; he wasn’t hurt. … Reigning Carolina Clash champion Zack Mitchell and G.R. Smith were first-lap retirees. … The race was the 325th on the series since its April 1, 2000, launch at County Line Raceway in Elm City, N.C. Roger Lucas of Benson, N.C., competed in that event as well as the latest series event in Fayetteville. … Ryan Gifford’s time trial was scrapped when he was light at the scales after qualifying. It marked Gifford's return to the track after a hiatus of more than a year. ... Dustin Mitchell retired early from the Carolina Clash feature but won the track's Limited Late Model division feature. (Additional information from Thomas Pope of the Fayetteville Observer).