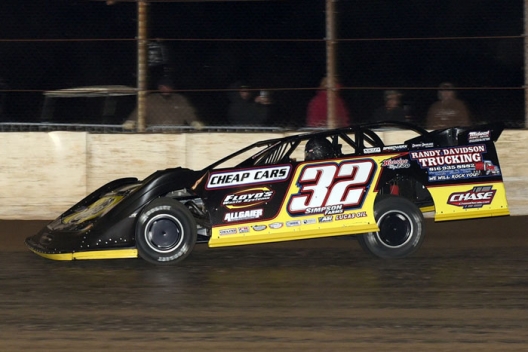 La SALLE, Ill. (March 31) — Chris Simpson was well aware that the route he took to a career-high $15,000 victory in Saturday night’s seventh annual Hoker Trucking Thaw Brawl finale at La Salle Speedway was a bit out of character for him.

Indeed, for most of the 75-lap Lucas Oil Midwest LateModel Association-sanctioned feature, the 34-year-old driver from Oxford, Iowa, wheeled around the high-banked, quarter-mile oval’s extreme outside lane rather than sticking with the inside groove that he usually prefers.

“I gave ‘er hell up there for sure,” a smiling Simpson said of his assault on La Salle’s top side. “A lot of people are probably wondering if that was me in there, not going around that bottom.”

The strategy worked to perfection for Simpson, who dominated the action after grabbing the lead from his older brother, Chad Simpson of Mount Vernon, Iowa, on lap 18. Once in command the younger Simpson easily handled three restarts, including the race’s final one on lap 70, to cross the finish line with an advantage of 1.881 seconds over Rusty Schlenk of McClure, Ohio, who nipped Ricky Weiss of Headingley, Manitoba, in a photo-finish for the runner-up spot.

Chad Simpson, 39, started from the pole position — alongside his sibling — and led laps 1-17 but settled for a fourth-place finish in his new Black Diamond machine after losing third to Weiss on lap 72. His run capped his debut weekend of competition in 2018 driving for his longtime car owners Bud and Denise Brinkman of Marion, Iowa, who have announced that they will shut down and liquidate their Dirt Late Model team at the conclusion of the season.

Brian Shirley of Chatham, Ill., who relinquished the lead in Friday night’s 50-lap preliminary feature with just two circuits remaining when a deflating right-rear tire caused him to stumble between turns one and two, completed the top five. He started seventh and climbed as high as fourth in Bob Cullen’s XR1 Rocket.

Driving a Longhorn Chassis fielded by his step-father and mother, Kevin and Cindy Trca of Swisher, Iowa, Chris Simpson began his weekend at La Salle with an unspectacular 17th-place finish in Friday’s A-main run on a heavy, fast racetrack. His eyes lit up when Saturday’s surface turned up drier and slower.

“We struggled last night,” Simpson said. “The track was rough, and man, this thing ain’t nothing but good in the slick, so I was happy to see the track the way it was tonight.”

Nevertheless, while Saturday’s surface was much more to his liking, Simpson still had to adapt his style to the feature’s fastest line.

“I started rolling the middle there early on and Chad checked out a little bit (in the lead), and then I found that top and man, the car just drove right around that top really good,” Chris said. “It wasn’t easy, I don’t like to be up there, but we got it done up there for sure. Pretty much 70 of the 75 laps we were up there. It feels good to get it done up there.”

Simpson’s biggest challenge was overtaking Weiss for second early in the A-main. His attempts to pass the Canadian were thwarted repeatedly until he finally sailed around the outside of Weiss for the spot following a lap-16 restart, setting the stage for his move by his brother to take the lead.

“I was kind of just playing around there with Ricky, and then I got that top working and Ricky kept closing the door, closing the door,” Chris said. “I was getting pretty frustrated behind the wheel, but that caution let him see me enough to where he had to give me room.”

Simpson controlled the remainder of the distance, building his edge to as much as two seconds. The was his margin over Schlenk when the race’s fourth and final caution flag flew on lap 70 for a turn-four spin executed by Ryan Unzicker of El Paso, Ill. — a caution that resulted in mixed emotions for Simpson.

“The only thing that worried me was there was lapped cars in front of me, probably about 10 car lengths,” Simpson said. “I was hoping I didn’t catch him, but I hate cautions because it bunches us back up and gives ‘em a chance to get after me.

“But all in all, I think we would’ve been alright. I had a maneuverable car to where I could dive through the middle of one and two and then just touch the cushion and come off. I think that’s what really saved us the whole race. I started getting up there and hitting and bicycling and I knew I had to find a different way to get through one and two if I was gonna win the race.”

Which Simpson did, his 12th career MLRA triumph (eight have come in the past three years) and seventh career victory that paid five figures. It was his second special-event score at La Salle, where he previously captured a UMP DIRTcar Summernationals feature in 2015.

“Any time you can start a year with confidence like that it’s huge,” said Simpson, whose La Salle appearance marked his first action since he competed in January’s six-race Keyser Manufacturing Wild West Shootout in Arizona. “There’s some big races (upcoming) … Farmer City (Ill.), that will be the next race for us (the April 13-14 Illini 100). It’s just huge to be able to come out here and get a win like this.”

Schlenk, 31, never truly applied any heavy pressure to Simpson, but the race’s sixth starter felt his C.J. Rayburn house car had the speed for one last-gasp bid — if the lap-70 caution flag hadn’t flown.

“I didn’t want that caution at all,” said Schlenk, who overtook Chad Simpson for second on lap 25. “I feel like the car was pretty good and I was getting ready to make a run at him. I was just biding my time and we were in traffic there. I think the last five laps of that race could’ve been pretty interesting … I would’ve got to his bumper, but I don’t know if I could’ve done anything with him.

“I was actually a little bit better than him if I could hit my marks on entry and kind of roll into that hole with my right-front. But I got so tight there at the end, I think I pushed off the right-front there in traffic trying to get through. Once we went back green (on lap 70) I got too tight and just couldn’t run that line I had been running. I was just holding on at that point.”

“Don’t get me wrong, I wanted that 15-grand, I wanted to be able to hold that (championship) belt (trophy) up,” Schlenk said. “But man, second with this competition, at this race especially … it’s hard to win. This is one of the toughest races I go to every year, and to be able to run door-to-door with these guys and have a shot at it there at the last five laps, man, I’m happy.”

The 29-year-old Weiss’s third-place finish made him the only driver to finish in the top four in both Thaw Brawl features. He didn’t match his runner-up outing on Friday night, but he felt his Sweet-Bloomquist car was coming on when the checkered flag flew.

“We had a real good weekend,” Weiss said. “I know I said it last night, but I wish there was 25 more laps. The car was getting real good there near the end.

“The middle of the race (the track) just got top dominant. Normally I like to run up there, but the way this car rolls through the black … I just tried to roll through the bottom, roll through the middle, and I guess I should’ve got up there quicker (he briefly slipped out of the top five). Eventually the top just got so treacherous that guys were starting to come off it and I could just roll the bottom so much better.

“Again,” he added, “if we would’ve had a few more laps I think we could’ve made it interesting.”

Chris Simpson’s biggest scare came when the race’s second of four caution flags came out on lap 24. Three backmarkers tangled off turn four and Simpson spun to avoid them; his car sustained minor right-rear body damage, but he retained his spot at the front of the pack because officials ruled that he wasn’t part of the initial accident.

Other caution flags came on lap 16 for a homestretch spin by Dennis Erb Jr. of Carpentersville, Ill., who continued and rallied to finish eighth, and lap 26 when Jason Feger of Bloomington, Ill., stopped on the backstretch and then headed to the pits.

Brandon Sheppard of New Berlin, Ill., had a short night, scratching from further action after discovering terminal mechanical trouble in his familiy-owned car before his heat.