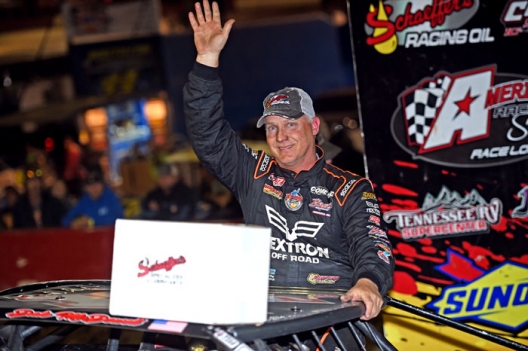 And the lone car the Mooresburg, Tenn., driver couldn’t overtake in the weekend finale on the Schaeffer's Spring Nationals tour was a familiar one as outside front-row starter Dale McDowell of Chickamauga, Ga., denied Bloomquist for a flag-to-flag, 60-lap victory worth $10,000.

McDowell, whose Shane McDowell Racing-prepared Sweet-Bloomquist car is housed on Bloomquist’s property in east Tennessee, repelled Bloomquist’s first-half charge, then held on the final 32 laps when passing was at a premium on the usually racy 3/8-mile oval.

While thanking everyone “that makes this thing go around and makes my job easy,” McDowell knew his job was a bit easier late in the race. “The racetrack kind of locked down there at the last. I felt pretty good early up top, which is really not my forte, but we was making it work. Hat’s off to Scott, it’s his design stuff, he and Cody (Mallory) and Sweet-Bloomquist Race Cars.”

Bloomquist was all over McDowell late, but Friday’s $3,000 winner — he overtook hometown driver Clint Smith with two laps remaining — settled for a runner-up finish, 0.474 seconds behind the winner. Aaron Ridley of Chatsworth, Ga., who briefly pulled ahead of Bloomquist before halfway, ended up third while fellow Georgians Smith and Zach Leonhardi rounded out the top five finishers.

McDowell couldn’t have been too disappointed that Bloomquist’s ability to pass was difficult late in the race, but the driver that helps prepare the surface at Boyd’s Speedway in Ringgold, Ga., sympathized with Senoia’s track crew.

“To keep (a track surface) slick, you always are flirting with the risk of it getting one-landed,” McDowell said. “Last night’s racing was awesome, tonight it was there for a little bit and just kind of went the other direction.

“I’m sure they’ll make some adjustments and come back and have it a little bit wetter earlier. I do a little bit of track prep stuff, too, so it is tough and you do get criticized for different things that you do. They did what they could do to put on a good show for the race fans.”

Bloomquist, who roared from his fifth-row starting spot and into contention in the early laps, did all he could with the track surface.

“The racetrack got streaked up in the bottom and it was really hard … I was thinking about trying the outside of (McDowell), and I just creeped out a little bit and I wasn’t confident enough that it was going to stick,” Bloomquist said. “If you missed it a little bit you were probably going to go up probably another three or four lanes up higher than you wanted to.

“Dale, he had a good starting spot, you know? That was the key. We started ninth again tonight and we got up there tonight pretty quick. And then, I should’ve — I did hit that bottom and gained a lot on Dale there, and I didn’t realize it was starting to latch up that good.  Then when I got passed (by Ridley), I said I better get down. We got that position back and ran Dale down, but still, you weren’t going to pass out there at the end. But congratulations to him, I’m glad to see him run good, and those Sweet-Bloomquist cars are doing well.

“I was hoping for a little more for a track (surface) like last night … anyway, a good weekend. We’ll take it and go home and hit the next one.”

Notes: Bloomquist’s most serious challenge of McDowell came on the 14th lap amid traffic. … A lap-28 caution appeared for debris on the track as a track worker picked up several tools on the track. … It was a two-car duel over the final 20 laps. … McDowell's victory moved him atop the alltime Spring Nationals list with seven victories (he was previously tied with Mike Marlar at six). … Dennis Hale won the track’s Limited Late Model feature while Crate victories went to Austin Horton (604s) and Levi Campbell (602s). (Additional information from Richard Allen of InsideDirtRacing.com.)