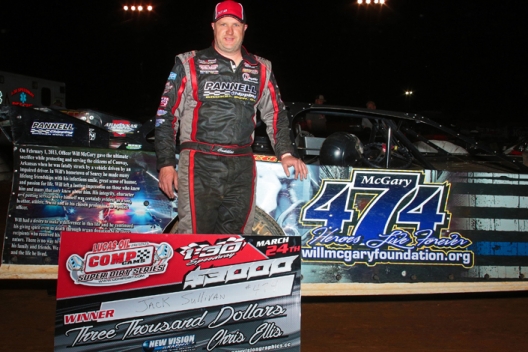 Woody Hampton
Jack Sullivan earned $3,000 for winning the Will McGary Tribute at I-30.
What won the race: Leading every lap from the pole, Jack Sullivan of Greenbrier, Ark., turned back challenges from Billy Moyer of Batesville, Ark., to win Saturday’s 40-lap Will McGary Tribute at I-30 Speedway. Moyer settled for second, while Kyle Beard of Trumann, Ark., finished third. Sullivan collected $3,000 for the flag-to-flag victory.
Quotable: “I really wanted to win this race last year, but came up a little bit short so it means a lot to win tonight,” said Sullivan, who ran a special graphics scheme with the No. 474 in honor of the late Officer McGary’s badge number. “This win is dedicated to Officer McGary’s family, friends, and coworkers as well as all of the brave men and women who protect us everyday. This win is for all of them.”
Key notes: Sullivan finished 0.471 seconds ahead of Moyer for his second CCSDS triumph this season. … It was Sullivan's third win in his last five series starts at I-30. ... Moyer made his second start of the season. … Eleven of the 21 starters completed all 40 laps. … Timothy Culp ran third for much of the feature, but a late-race flat tire sent him to the pit area. ... Chandler Petty was sidelined by mechanical issues, knocking him from a top-10 finish. ... This was the second annual Will McGary Tribute, held in honor of the former Arkansas police officer who lost his life in the line of duty on Feb. 1, 2013 when he was struck by an impaired driver.
On the move: Hunter Rasdon started 14th and finished eighth.
Winner's sponsors: Sullivan’s Rocket Chassis is powered by a Clements Racing Engine and sponsored by Pannell Chipping, Mark Martin Automotive, Keyser Mfg., Central Arkansas Pest Services and Bennings Heating & Air.
Points chase: Heading into the weekend, Jack Sullivan had 127 points to lead Gavin Landers (121 points), Robert Baker (119), Jesse Stovall (117) and Payton Looney (115).
Car count: 21
Polesitter: Jack Sullivan
Heat race winners: Morgan Bagley, Billy Moyer, Jack Sullivan
Provisional starters: David Payne
Next series race: March 30, Timberline Speedway (Corley, TX) $2,000
Editor's note: Results and race details are unofficial.