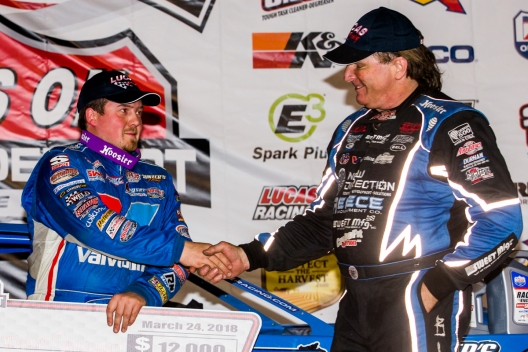 That, of course, is just more evidence of how good the 25-year-old star from New Berlin, Ill., has become.

“I haven’t been here but one other time and I was kind of searching probably more than I should’ve been,” Sheppard said after collecting a $12,000 check for his first-ever triumph at EAMS. “But finally there at the end I felt like I got a little bit more comfortable and the track rubbered up a little bit more down there. That helped me a little bit more.”

Sheppard, who started from outside the front row, led the race’s opening lap before ceding the position to polesitter Don O’Neal of Martinsville, Ind. The reigning World of Outlaws Craftsman Late Model Series champion regained command from O’Neal with a slider through turns three and four on lap nine and was never headed thereafter, but his inexperience at the track, five restarts during the race’s second half and the presence of Mooresburg, Tenn.’s Scott Bloomquist kept him on his toes to the checkered flag.

Bloomquist, 54, was hot on the rear bumper of Sheppard’s Rocket Chassis house car for a single-file restart on lap 43, but Sheppard made no mistakes over the remaining distance and held on to defeat Bloomquist’s Sweet-Bloomquist mount by 0.643 of a second.

The 53-year-old O’Neal settled for a third-place finish in his Clint Bowyer Racing Club 29 Race Car after leading laps 2-8 and swapping the runner-up spot with Bloomquist on three restarts. Bloomquist finally gained second place for good from O’Neal after a caution flag on lap 36.

Sheppard rang up his third Lucas Oil triumph of 2018 and his fourth overall of the young season. He previously was victorious twice during February’s Wrisco Industries Winternationals at East Bay Raceway Park in Gibsonton, Fla.

Free to enter the Lucas Oil Series weekend in the southeast after his planned WoO trip to Farmer City (Ill.) Raceway’s Illini 100 was nixed by an early postponement due to bad weather, Sheppard used his savvy as much as driving talent to emerge as the winner.

“I knew especially after I felt (the surface) latching up a little bit in (turns) three and four that I was gonna have to start worrying about (tire wear),” said Sheppard, who claimed his ninth career win on the Lucas Oil tour. “There at the beginning the track was just real slippery and I knew that the tires weren’t that big of a deal so I was kind of going a little bit hard, and then once I started feeling it scotch up a little bit in three and four I knew I needed to slow down a little bit.”

For Sheppard, the most worrisome part of the race was the restarts.

“Honestly, I didn’t know where to be on the restart,” he said. “I didn’t want to turn all the way down to the bottom because I was better up on the track. It was crazy.”

Bloomquist thought he might have a shot at sneaking into the lead midway through the race when Sheppard appeared to be running outside the groove that was taking rubber, but he wasn’t able to make the move happen.

“The track started rubbering up down in three and four and Don hadn’t really picked up on that yet and neither did Sheppard,” said Bloomquist, who also indicated that his softer-compound tire choice hampered him a bit. “I think when I got Don in the middle (of the race), I think if I could’ve got to Sheppard when he was still trying to run the cushion I think we might’ve been able to get it done.

“All in all, we got a couple of seconds this weekend,” he added. “We’ll just take ‘em in stride and go on. We got our program pretty good here and keep on trucking into the next one.”

O’Neal, meanwhile, had to be satisfied with his first top-five finish of 2018 on the Lucas Oil circuit.

“Them restarts were interesting,” O’Neal said of the position-changing he did with Bloomquist. “Whoever got the jump on the restart would be in the front of the other car. One time the top would be good, the next time would be good. Then it got rubbering up really hard on the (three and four) end.“The way we’ve been struggling, the way our Speedweeks went and last night wasn’t very good, running top three was what we needed to do. Hopefully this momentum will carry over.”

Seven caution flags slowed the feature. Zeigler brought out the first (lap nine) and last yellows; Boom Briggs of Bear Lake, Pa., went off turn two on lap 25; Joey Coulter of Troutman, N.C., was involved in a lap-29 tangle with Ross Bailes of Clover, S.C., and triggered another caution on lap 32; and Dennis Erb Jr. of Carpentersville, Ill., slowed with a left-rear flat tire to cause a caution on lap 36. Debris on the track also created a slowdown on lap 17.

Notes: Tim McCreadie of Watertown, N.Y., was the first retiree from the feature, finishing 26th because a broken driveshaft forced him out on lap 15 just one circuit after he had passed Don O’Neal for third place. …  Bobby Pierce of Oakwood, Ill., ran as high as fourth before settling for a sixth-place finish. … Jonathan Davenport of Blairsville, Ga., finished a quiet 14th after transferring through a B-main but remained atop the Lucas Oil points standings by five markers over Josh Richards of Shinnston, W.Va., who finished ninth after starting fifth. … Lucas Oil rookie contender Kyle Bronson of Brandon, Fla., experienced motor problems in his heat race and started the feature in Jeff Mathews's car thanks to a provisional. He salvaged a 15th-place finish.