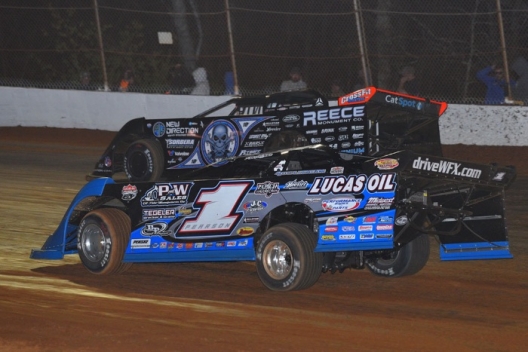 “That’s the one that pays,” said Pearson after the Jacksonville, Fla., native slipped by leader Scott Bloomquist of Mooresburg, Tenn., on the final turn of the final lap to secure his second straight Shamrock victory.

Winning his first race since becoming the house car driver for Ronnie Stuckey’s Louisiana-based Black Diamond Chassis, Pearson was far from dominant. But he was plenty good when he needed to be. Never far from the top five in the early going of the 50-lapper, Pearson found a head of steam after the halfway mark.

After clearing Hudson O’Neal and Brandon Overton, he trekked down second-running Chris Madden, taking the position from the polesitter and early leader on lap 47. He caught Bloomquist as they raced down the backstretch on the final circuit.

As Bloomquist struggled to keep his machine down on the track, Pearson darted beneath him entering turn three. He easily cleared the Hall of Famer from Mooresburg, Tenn., and beat him to the finish by a mere 0.139 of a second for caution-free victory worth $12,000.

Madden, of Gray Court, S.C., settled for third after leading the first 25 laps from the pole. Overton, of Evans, Ga., finished fourth, while the 17-year-old Hudson O’Neal, of Martinsville, Ind., finished fifth after starting on the front row alongside Madden.

“I knew our car was good in the bottom and getting a little bit better,” Pearson said. “Them guys was running in the middle of the racetrack. We’ve been good all day really and everything just come to us right there coming off turn four and (we) passed Scott. I mean, what a heck of a finish. We could turn around that bottom really well there and our car could move around quite a bit. I raced Brandon (Overton) for a long time. It was a heck of a race.”

The sixth-starting Pearson had to watch and wait as first Madden and then Bloomquist took their turn at the front. Madden easily got the jump on O’Neal at the start and built a solid lead in the first 15 laps. Bloomquist, who started fourth, passed Overton for third on lap nine and took second from O’Neal on lap 15. He then used an outside pass on lap 26 to take the lead from Madden.

When fifth-starting Ricky Weiss of Headingley, Manitoba, slipped back a couple positions — his car's spindle had been bent after he was squeezed into an inside tire — Pearson moved into a three-way battle with Overton and O’Neal. With Bloomquist seemingly on cruise control out front, Pearson worked hard to break away from Overton and O’Neal.

“A little small racetrack like this, slicking off, you could run all over it,” Pearson said. “Everybody run everybody clean and didn’t run over anybody. Honestly, we was racing back there, me and (Hudson) O’Neal and Brandon (Overton), I didn’t realize where (Chris) Madden was at. I thought he had done checked out. I saw (Madden and Bloomquist) racing and once I got clear of that I thought I was a little bit better off the corner than Scott was. It just worked out for me.”

Pacing himself, Bloomquist began to slow over the final 10 circuits, allowing Pearson to dramatically close the gap. Bloomquist, who said he went with a softer compound tire than his competitors, felt as though he was one caution away from wrapping up his first Lucas Oil Series win since Sept. 23 at Brownstown (Ind.) Speedway.

“The car was really good. It was great actually,” Bloomquist said. “We just checked out some tires … you can run (Hoosier) 1350s or 40s … and these guys had on 40s. The 1350 was a little bit softer tonight. The car was good enough to carry it. We were just trying to be smooth at the end and not have it give up too much. If we’d had one caution I think we’d been saved.”

Instead, Bloomquist struggled to keep his mount beneath him in the waning laps of the caution-free affair.

“Whenever I’d get in (the turn) and try to carry some momentum on the entrance, the car would just start sliding,” said Bloomquist. “The right rear wouldn’t hold the sidebite. I didn’t realize (Pearson) was quite that close. That’s the way it goes. I felt like we had the best car tonight, we just needed a little different tire.”

Madden pointed to his decision on tires as a factor as well. Seeking his second straight five-figure payday after winning March 4 in Southern All Stars Series action at Cherokee Speedway in Gaffney, S.C., Madden thought his pre-race prep possibly kept him from his second consecutive win.

“We just missed it on tire just a little bit,” Madden said. “We done some different grooving and preparation there and it just didn’t work out in the long run. But overall we had a good car tonight. When we first took off we was maneuverable and then I kinda got restricted to the top line. Then we caught a couple cars … (Kyle) Bronson and them guys (in) the middle to the top to all over and we just couldn’t make it by ‘em. I thought we had a run going back there and was gonna be able to get back by Scott and we got to Bronson there and it just kinda killed all the momentum.”

Notes: In claiming his 33rd career Lucas Oil Series victory (fourth on the series win list), Pearson denied Bloomquist his 87th career series win. Bloomquist’s 86 Lucas Oil victories top the series list. … While his drought-busting victory last season ended a dry spell of nearly two years, Friday’s win came just 28 races since Pearson’s last tour victory on May 25, 2017, at Lucas Oil Speedway in Wheatland, Mo. … Twenty-five of the 26 starters finished the race with 21 completing all 50 laps. No car still on the track was more than a single lap down at the finish. … Boom Briggs of Bear Lake, Pa., was the only retiree. He pulled in after completing 28 laps. … When Lucas Oil Series director James Essex asked Bloomquist if he planned to send out a postrace Tweet, Bloomquist, who has just started dabbling in social media, replied, “I haven’t thought about it, but we’ll probably put something out there.” … Among drivers failing to qualify for the main event: Jason Hiett, Casey Roberts, Austin Tyler Smith, Michael Page, Ray Cook, Joey Coulter, Billy Moyer Jr., Jason Croft, Frank Ingram and Ryan King.