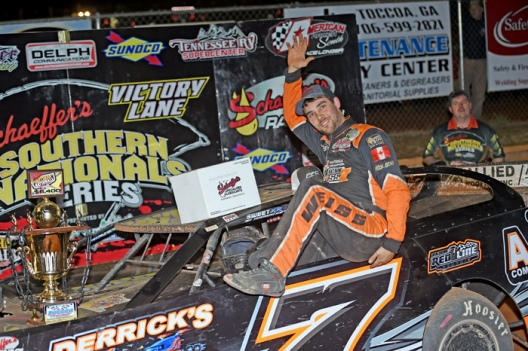 Brian McLeod
Ricky Weiss emerges from his car after his career-high payday.
What won the race: Fourth-starting Ricky Weiss of Headingley, Manitoba, passed Casey Roberts of Toccoa, Ga., for the lead on lap 18 and never looked back en route to scoring a $6,400 victory in Saturday night's 64-lap Schaeffer's Southern Nationals Bonus feature at Toccoa Raceway. Weiss endured six cautions, including a late yellow prompting a three-lap shootout, to take the checkered flag ahead of Shanon Buckingham of Morristown, Tenn., and David Payne of Murphy, N.C.
Quotable: "Once I got rolling there, I knew we were good," Weiss said. "I just tried to be patient. It's a different track to pass on. I knew we had a good hot rod. I've (messed up) a few times and took myself out of the race, so I didn't want to do that. I didn't want to see that caution (late), but we made it work."
Key notes: Weiss backed up his second-place finish in Friday SNBS action at Tri-County Racetrack in Brasstown, N.C., with his first-ever win on the tour and his third overall triumph of 2018. He previously won twice during January's Wild West Shootout in Arizona. ... Racing at his hometown track, Roberts started on the pole and led 18 laps before ceding the point to Weiss. The driver of the Blount Motorsports No. 101 later slowed on lap 36 to bring out a caution but finished seventh. ... Six cautions plagued the race, none bigger than the slowdown for Benji Hicks with three laps remaining that set up a final sprint to the finish. ... The SNBS made its first appearance at the Georgia oval.
On the move: Zack Mitchell of Enoree, SC., started eighth and finished fourth.
Winner's sponsors: Weiss drives a Sweet-Bloomquist car powered by a Vic Hill Racing Engine and sponsored by Derrick's Sandblasting, AIE Communications, Hawkeye Construction, Penske Racing Shocks, Allied Roofing, Orthopaedic Institute of Western Kentucky, Keewatin Truck Service, Turk Enterprises, Forest Flying Service and Straight Ahead Ventures.
Points chase: After two series events, Ricky Weiss has 396 points to lead David Payne (382) and Casey Roberts (380).
Car count: 17
Fast qualifier: Cla Knight
Time: 12.024 seconds
Next series race: April 28, Blue Ridge Motorsports Park (Blue Ridge, GA) $4,000
Editor's note: Corrects lap of winning pass.