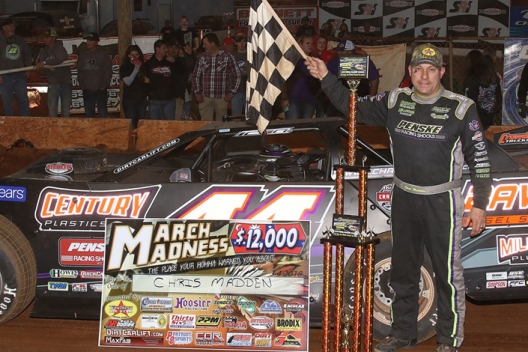 GAFFNEY, S.C. — It’s quite possible that Chris Madden has been perfectly satisfied with the start of his 2018 season. Then again, it’s Chris Madden, so there’s an outside chance that despite collecting three runner-up finishes and winning the overall DIRTcar Nationals title at Volusia Speedway Park during Georgia-Florida Speedweeks, the competitive Gray Court, S.C., driver felt as though he should’ve already had a victory by now.

Madden’s been oh so close in his new Barry Wright Race Cars Icon chassis, so much so that he’s probably been waiting with bated breath to say I told you so to the detractors who found fault in his offseason move to South Carolina-based chassis builder.

Taking the lead from his second starting position on the opening circuit of the 60-lapper, Madden raced to a relatively easy victory over Scott Bloomquist, finishing 3.150 seconds ahead of the Hall-of-Fame driver from Mooresburg, Tenn. Ross Bailes, the 2017 March Madness winner from Clover, S.C., finished third, while Don O’Neal of Martinsville, Ind., finished fourth. Zack Mitchell of Enoree, S.C., completed the top five.

“It’s just hard work paid off,” Madden said. “Me and Collin and Barry and Lance, Rodney and Toby and Jab, all the guys at the shop there … Joey, Shawn, you know, every one of them played a big part in this car. You know it’s just amazing to get a win here at home in front of all these people. We just picked up from where we left off in Florida. We spent a lot of time at the shop this week … many, many hours. We brought a whole different race car here this weekend and it really paid off.”

With passing at a premium, Madden was rarely challenged. He negotiated traffic with little trouble and dealt with only a handful of cautions as he circled the bottom-dominant track, often a byproduct of racing in the daytime.

“It was a little hairy through lapped traffic,” Madden said. “The racetrack wasn’t that wide for two cars, but we was able to pick us a spot over there entering (turn) three and we was able to hit our mark pretty much every time and make the pass when I need to make the pass.”

Fourth-starting Bloomquist moved by Ferguson following a restart on lap six and gave chase futilely, only managing to narrow the gap when Madden took his time around the occasional back marker. Bloomquist lost ground midway through the race when he slipped high on a restart and fell back to fifth. He managed to reclaim the lost positions on lap 52, however.

Third-running Ferguson spun out of contention on an initial restart on lap 52. Bloomquist then managed to get by Bailes on the next restart on the same lap to secure second. Bailes felt like his decision to pick the inside line on the final restart likely cost him a runner-up finish.

“I should have chose the outside on that last restart and Bloomquist got by me,” Bailes said. “But we’ll take it … first night out on the car. We’re happy with it. Lapped traffic was tough because they were in the rubber and I wanted to be there and I didn’t want to get above it. So I just tried to wait until they made a mistake to get by ‘em. I knew if I stayed on the inside, no one could get by me.

“Last year I had it set up just about the same way it was this year, with starting in the outside with like 10 (laps) to go and I should’ve known better, but I chose the inside and made the wrong decision.”

Notes: Sixteen drivers finished the race, with 13 completing all 60 laps. … Chris Ferguson of Mount Holly, N.C., started from the pole and ran in the top fie throughout the race until his late spin. He eventually finished 12th. … Making his first start at Cherokee, series hopeful Jay Scott of Fayetteville, Tenn., retired on lap 30 with an overheating engine. … Ray McElhiney of Pulaski, Tenn., slowed to bring out the first caution on lap six. … Madden was happy to be racing close to home and with a rare Sunday race giving the team a little break on Saturday, he took advantage by spending time with his son Avery. “We spent all day (Saturday) at the ballfield. We worked late Friday night on this car, went back over there and worked Saturday morning and then we spent (of Saturday) at the ballfield with (Avery).”