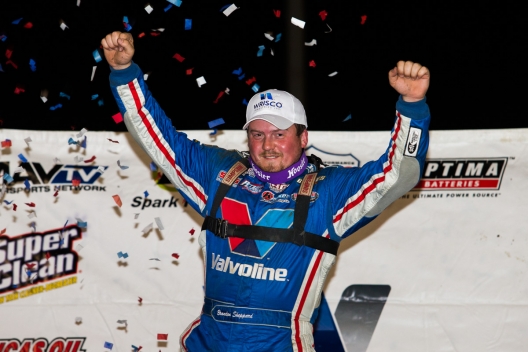 GIBSONTON, Fla. (Feb. 5) — Race of the Year? Monday’s opening round of East Bay Raceway Park’s Wrisco Industries Winternationals will certainly be amid the discussion come November.

“I didn’t really find anything,” Sheppard said of his last-lap pass. “It’s treacherous getting into the corner, especially if you get off the bottom out of the brown. It’s really tricky because you just go into a death slide. I guess that last lap I just never lifted."

It was polesitter Kyle Bronson of Brandon, Fla., leading the opening two laps, with third-starting Moran shooting ahead down the backstretch to assume the point on the third circuit. Moran held his lead through the race’s first caution on lap six, as Josh Richards of Shinnston, W.Va., and Earl Pearson Jr. of Jacksonville, Fla., battled behind him for the runner-up spot.

Pulling ahead of Pearson, second-starting Richards set his sights on Moran, slipping past the defending World of Outlaws Craftsman Late Model Series Rookie of the Year at the line to lead lap 12. With another yellow flag waving on lap 14, Moran used the restart to his advantage, sliding back ahead of Richards in turn four to regain the point on lap 15. But at the halfway mark, the race was far from over.

Working the low groove, the third-running Sheppard took it three-wide with the race leaders exiting turn four to take the lead on lap 16, with Moran racing back to the front of the field on lap 18.

As the leaders worked their way through lapped traffic, Jonathan Davenport of Blairsville, Ga., joined the action up front, charging around the high side to battle Sheppard and challenge Moran. Just as Moran appeared to be padding his lead in traffic, Sheppard’s late-race rally began, with the reigning WoO champion powering around the high side to lead the final lap and win the East Bay opener for the second straight year.

“My dad texted (Rocket Chassis) Mark (Richards) before the race and told him to get on my butt so I could get up on the wheel a little bit,” Sheppard said in victory lane. "I had to step up the program. I knew dad was disappointed at home with two fifth-place finishes. I just can’t thank Mark Richards, Steve Baker, everybody at Rocket Chassis enough. They gave me this opportunity and it’s a dream come true."

Growing up watching his father Donnie race at East Bay, Moran counts the Florida oval among his favorite racetracks. A victory in Monday’s event would have been special. But a runner-up finish against a strong field of cars is still a solid start to his Georgia-Florida Speedweeks campaign.

“It would have been better if we would have won,” Moran said. “But we had a good run here, good all night. Now we just have to get one step better to be able to beat that blue car.”

“They were just showing out up there in front of me,” Pearson said with a laugh. “We had a pretty good car. The first night here at East Bay, we’ll take this and build on it for the rest of the week. That was one heck of a show in front of me."

Notes: Sheppard scored his seventh career Lucas Oil Series victory. … The race was slowed by two cautions. … The first yellow flag waved on lap six when Brian Shirley slowed his smoking No. 22 in turns one and two. … Tim Dohm slowed in turn two to draw a caution on lap 14.

Josh Richards’s crew chief, Randall Edwards, expressed confidence when asked how the Best Performance machine Richards drove to a Heat 3 victory was performing. “We’re good,” Edwards said while preparing the XR1 Rocket mount that Richards steered to his last-to-first triumph on Saturday night at Golden Isles Speedway. … Richards will try to extend his streak of winning at least one Winternationals feature to four years. … Heat 4 winner Bobby Pierce was happy to win his first Lucas Oil heat in his new Dunn-Benson Racing ride, but he wasn’t feeling completely confident yet in his vehicle. “I feel like I’m sitting on top of the racetrack,” he said. “Everyone’s having a hard time hooking up. It’s pretty slippery.” … Devin Moran won the second heat, but his car owner, Tye Twarog, said the team was making “wholesale changes” to the car in hopes of improving it for the headliner. “We’re a fifth- or sixth-place car right now,” he said. “We’ve got nothing to lose, so we’re gonna throw some stuff at it.” … Heat 1 victor Kyle Bronson, who knows East Bay as well as anyone in the field, said he was hoping the track would slow down for the feature. “I feel pretty good, though,” said Bronson, who has Randy Weaver and Dream Racing crew members assisting his effort. … Veteran Floridian Ivedent Lloyd Jr. was seen helping fellow Sunshine Stater Jeff Matthews make some carburetor adjustments to his car’s engine after finishing fourth in the second heat.

Third-starting Corey Conley slipped ahead of front-row starters Scott Bloomquist and Tim McCreadie to lead the first lap, with Bloomquist shooting back to the front of the field one circuit later. A yellow flag waved on lap four when McCreadie slowed on the backstretch. Conley retook the lead on the restart, with Jason Jameson rallying from the ninth starting spot to battle Ryan King for fourth at the halfway mark. Bloomquist pulled back ahead of Conley to win the consolation, with Stovall charging around the high side to finish second after starting eighth. Conley held on to take the third and final transfer spot.

Polesitter Gregg Satterlee took an early lead, with a yellow flag waving on lap one for the spinning Craig Wolford. With Satterlee stretching his lead at the halfway mark, third-running Freddie Carpenter nearly spun in turns one and two while challenging Donald McIntosh for the second-place spot. Satterlee won the consolation, with Austin Hubbard overtaking Donald McIntosh in the final laps to finish second.

Polesitter Josh Richards charged to the lead at the drop of the green flag, with third-starting Jonathan Davenport shooting to second to challenge for the position. After falling back in the opening laps, outside polesitter Tim Dohm worked his way back to third by the halfway mark, reeling in the race leaders. A yellow flag waved on lap eight when Jason Jameson spun in turn four; he drew a second caution on lap nine. Richards held off Davenport to win the heat, with Dohm finishing third. Jonathan Rowan pulled ahead of Scott Bloomquist in the final laps to finish fourth and transfer to the feature.

A yellow flag waved on the opening lap when Byron Meeks and Craig Wolford tangled in turn one. As the race went green, Devin Moran shot the front of the field, with Mason Zeigler and Earl Pearson Jr. battling for the runner-up spot. Meeks drew a second caution when he slowed on the frontstretch on the fourth lap. Dominating all 10 laps, Moran won the heat. Pearson finished second, with Zeigler rounding out the podium in third. Jeff Mathews grabbed the fourth and final transfer spot.

Front-row starters Kyle Bronson and Tyler Erb battled side-by-side through the early running, with Erb pulling ahead on lap three. Sliding ahead of Erb in turn four, Bronson retook the lead on lap six. Bronson pulled away in the late running to win the heat. Erb finished runner-up, with Brandon Sheppard and Brian Shirley transferring to the feature.

Monday’s weather is absolutely perfect — sunny skies with temperatures reaching into the mid-70s — but the residual effects of the heavy rain that washed out Sunday evening’s practice session is evident. There are several muddy spots in the pit area and one large, deep accumulation of water that’s been dubbed “Lake East Bay” by observers. The sippy hole is so expansive that teams parked on the other side of it don’t want to drive through it to get to the racetrack and the alternate route around the extreme rear of the pits has soft sections that could cause problems for those traversing it as well. … Winternationals stalwart Tim Dohm of Cross Lanes, W.Va., is debuting a new Swartz car that he finished assembling on Friday night and lettered on Saturday before leaving. He is without crew help from his two sons, however; Zack, whose engine is in Tim’s machine, is home working at the family cycle shop while Nick had to call off his trip because he broke his ankle Friday when he slipped on ice while picking up a transmission from Jared Hawkins of Fairmont, W.Va. … Devin Moran of Dresden, Ohio, unloaded his car from a standard-sized enclosed trailer because his Tye Twarog-owned team’s toterhome and stacker rig is still undergoing work at 5150 Race Trailers in Lewisburg, Tenn. Moran’s father, Donnie, is picking up the primary hauler, driving it back to the team’s Ohio shop and loading it up with his youngest son Wylie; they will then meet Devin and Co. at Screven Motor Speedway in Sylvania, Ga., on Thursday night for a practice night before the start of the World of Outlaws Craftsman Late Model Series doubleheader. … Jonathan Davenport of Blairsville, Ga., rolled into the pit area with his Lance Landers-owned operation as the drivers’ meeting was underway. The late arrival came because his crew was unable to repair nosepiece and other damage sustained Saturday night at Georgia’s Golden Isles Speedway because of heavy rain that prevented them from working outside on Sunday. … Hot off a $3,000 Crate Late Model victory on Saturday night at East Bay, Walker Arthur of Forest, Va., is ready to compete in Winternationals Super Late Model action for the first time in his career. … Jesse Stovall of Billings, Mo., is making his first East Bay appearance in a decade while veteran Bob Geiger of Laurel, Del., is returning to Winternationals action for the first time in three years. … Allen Murray of San Antonio, Texas — back racing his own equipment after announcing last year he was retiring from driving — is proudly sporting a Philadelphia Eagles shirt that reads “Ertz so good,” in reference to tight end Zack Ertz, who scored the winning touchdown in Sunday’s Super Bowl. A native of Reading, Pa., Murray grew up an Eagles fan.

The 2018 Lucas Oil tour got under way over the weekend at Golden Isles Speedway near Brunswick, Ga., where defending series champion Josh Richards of Shinnston, W.Va., swept The Super Bowl of Racing. Brandon Sheppard of New Berlin, Ill., was the  winner of last year’s East Bay opener.

Monday’s program will include time trials, four heat races, two consolations, the DirtonDirt.com Strawberry Dash and the 30-lap main event. Four cars from each heat race will transfer to the feature, as well as the top three cars from each consolation. Provisionals will set the final two rows of the feature lineup.

Drivers who have cars in the pit area but don’t plan to race include Clint Bowyer Racing teammates Darrell Lanigan and Don O’Neal; Jimmy Owens of Newport, Tenn.; Timothy Culp of Prattsville, Ark.; Boom Briggs of Bear Lake, Pa.; and Morgan Bagley of Longview, Texas, who is making his first appearance at East Bay since 2012 when he qualified for two of the week’s six features.