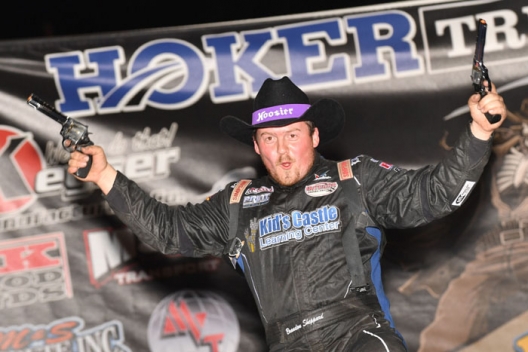 QUEEN CREEK, Ariz. — After five features where he never quite got into position to win, Brandon Sheppard concluded the 12th annual Keyser Manufacturing Wild West Shootout in the perfect spot — out front for 50 laps.

The New Berlin, Ill., driver stayed far ahead of any challengers at FK Rod Ends Arizona Speedway in Sunday's miniseries final en route to a $13,000 payday as he shot a pair of six-shooters in victory lane to celebrate.

“We’ve been working hard all week and really wanting to get a win eventually,” Sheppard said after lapping all but five competitors in the 24-car field. “I guess they finally got the track to where we could get up on the wheel a little bit, and we got ‘er done. So we’re just real thankful to be here in victory lane.”

Sheppard took the checkers 1.8 seconds ahead of Wild West Shootout points champion Mike Marlar of Winfield, Tenn., who survived a wild, back-and-forth battle for the runner-up spot with Ricky Weiss of Headingley, Manitoba, over the final seven laps.

Don Shaw of Ham Lake, Minn., a two-race miniseries winner like Weiss, finished fourth while rookie Cade Dillard of Robeline, La., rounded out the top five. Ryan Gustin of Marshalltown, Iowa, was the final driver on the lead lap.

The bad news for Sheppard? Engine woes struck on the final lap.

“I don’t know exactly what happened. As soon as I took the white flag it started vibrating,” said Sheppard, the reigning World of Outlaws Craftsman Late Model Series champion who notched his first career victory in Arizona. “It’s a good thing I must’ve had a little bit of a lead, because I just eased it on around there and, right before I got to the checkered, it blew and shut off. I don’t know what happened, but I’m sure it’s going to be expensive.”

Still, Sheppard thanked his father and grandfather for "giving me this opportunity and keeping me in great equipment” as he drove his family-owned No. B5 instead of the Rocket Chassis house car he pilots on the national tour.

The rugged conditions tested Sheppard, who got the initial jump on fellow front-row starter Tony Toste and led by two or three seconds much of the race.

“The track’s pretty treacherous up there, especially in (turns) one and two it’s getting pretty rough. It was slick to a ledge in (turns) three and four, so it was pretty tricky down there, too. I was having to bend the car a lot more than what I wanted,” Sheppard said. “We started off pretty tight. I didn’t know if I was going to be able to hang on or not. It was kind of wearing me out a little bit.”

Marlar, who held the second spot for 45 of 50 laps, said he was fortunate to turn back Weiss in a slide-job battle late in the race.

“I don’t know how I come out on top of (Weiss) because I was really on the short end of the stick there,” Marlar said. “I was slid up in the wrong part of the track most of the time there (but) it worked out and I hung onto second. Awesome race. I’d like to thank Ricky and Brandon and everybody for racing … me and Brandon, we've had a fun week, and congratulations to him for winning the race tonight.”

Marlar was glad to take home the lion’s share — $3,000 — of the $10,000 point fund, along with the glass-topped table on the base of a Late Model tire with an engine block part of the decoration.

“I was eyeballing that trophy when I got here the other day," Marlar said. "I said, ‘Man, I’d like to take that thing home.’ So we got it, and had a good week, had a fun week out here. I’m glad we were able to come out to this side of the country and race. They’ve got ‘em an awesome racetrack. I think it really showed tonight.”

Weiss, the four-time WISSOTA champion who won the series opener along with the previous night’s feature, would liked to have had a better shot at Sheppard instead of settling for the battle with Marlar.

The 50-lapper was slowed two cautions, both on lap 43. The worse of the two came when Shaw got into Dillard at the flagstand with Dillard spinning into turn one and collecting Shaw, Gustin, Mike Maresca and Billy Franklin.

The caution followed the race’s first yellow when Chase Junghans of Manhattan, Kan., slowed with a broken fan.

Miniseries promoters announced six race dates for next season along with plans to upgrade the Super Late Model purse for the 2019 finale. Next year’s winter miniseries is set for Jan. 5-6, 9, 11-13, co-promoter Chris Kearns announced at Sunday's drivers’ meeting.

The Shaw Trucking-sponsored $13,000-to-win feature for Super Late Models highlights the last of six racing programs that includes modifieds and X-mods at the third-mile oval southeast of Phoenix.

With Keyser Mfg.’s bonus program posting $10,000 for any Late Model driver with three victories, two-race winners Ricky Weiss of Headingley, Manitoba, and Don Shaw of Ham Lake, Minn., could earn $23,000 with a Sunday victory. Weiss is coming off a dominating 40-lap victory Saturday when he took the checkers nearly six seconds ahead of his closest competitor.

Miniseries points leader Mike Marlar of Winfield, Tenn., the only other Arizona winner in 2018, will try to stop Weiss and Shaw along with other top competitors Brandon Sheppard of New Berlin, Ill., Bobby Pierce of Oakwood, Ill., and Chris Simpson of Oxford, Iowa. The $10,000 Late Model points fund pays $3,000 to the champ.