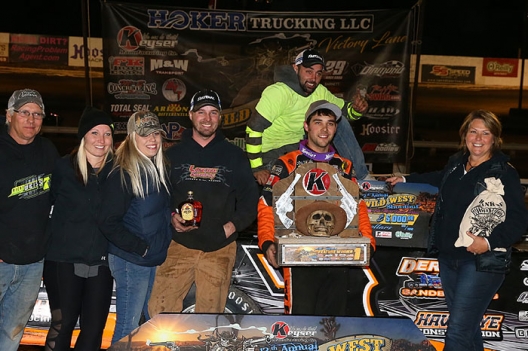 QUEEN CREEK, Ariz. — When the water truck, tractors and pack trucks hit the racing surface before a dirt-track feature, sometimes the race’s polesitter might get a little concerned whether a freshly-prepared surface might throw him a curveball.

Not Ricky Weiss. Not at FK Rod Ends Arizona Speedway. Not in his quest for his second Keyser Manufacturing Wild West Shootout victory in eight days. The Headingley, Manitoba, driver said he wasn’t worried at all.

The No. 7 Late Model worked clearly better than any of the other 23 starters in the fifth-round race as he raced unchallenged, stretching his lead to nearly six seconds while staying in position for a $10,000 bonus that’s part of title sponsor Keyser Mfg.’s lucrative program.

Weiss and fellow WISSOTA champion Don Shaw of Ham Lake, Minn., also a two-race winner, are in line for the extra $10,000 if either can capture Sunday’s $13,000-to-win finale.

Weiss is eager to climb into a car that’s carried him to two victories and led another race before he wrecked with Bobby Pierce while battling up front.

“It makes it so much more fun when you can drive something like this,” Weiss said, making sure to thank Scott Bloomquist, Randy Sweet, crew members, family members and his girlfriend in victory lane. “They build an awesome piece. I honestly think anyone could drive it. It just drives itself.”

Eighth-starting Cade Dillard of Robeline, La., reached the second spot just past halfway, when he was 3.1 seconds behind Weiss, who nearly doubled that lead the rest of the way.

Miniseries points leader Mike Marlar of Winfield, Tenn., was running third when contact with Sheppard sent him on an infield excursion on the backstretch with 10 laps remaining. Marlar immediately fell back to 11th but clawed back to finish eighth and unofficially maintain the points lead.

Dillard, starting his first full season of Late Model racing, scored his first top-five finish of the miniseries. He, like Weiss, wrecked while leading in a previous event.

“We’ve had a really good car all week. I’m glad to get a decent finish to show for it. We’ve just had a lot of bad luck,” said Dillard, who said he didn’t know he finished second until he was notified at the infield scales. “That’s better than I expected. We had a really good car. We just started a decent ways back … I can’t thank (MB Customs chassis builder) Jimmy Mars and A.J. (Diemel) enough.”

Assistance from the Bloomquist shop in Mooresburg, Tenn., keeps Weiss on the right track, the 29-year-old driver said.

“The little changes (we make), Cody (Mallory) calls us last minute and tells us to do, Shawn (Gage) does ‘em, and I know Scott’s blessing is there and everybody’s talking and everybody’s watching,” Weiss said, adding that the car has “just been awesome.”

Weiss, who missed the midweek feature when he slapped the backstretch guardrail in qualifying after setting fast time, turns his attention to trying to win the richest race of the miniseries and a five-figure bonus. Can he do it?

“The car can get it done, it’s just whether I can get a little luck … hopefully we got rid of all that bad luck Wednesday night and we’ve regrouped and we’ve shown that I think we’re the fastest car here. It doesn’t matter what the track throws at us, we’ll be good.”

Notes: The miniseries drew its biggest-ever crowd in the 12-year history. … Officials took 40 minutes before the main event to rework the racing surface, which didn’t have the high-side cushion typically present during previous miniseries events. … Rodney Sanders won the Pro Power Dash for non-qualifiers and opted to collect the $1,000 dash purse instead of tagging the tail of the main event.

Mike Marlar of Winfield, Tenn., solidified his miniseries points lead with a Friday victory and is one of three drivers who still have a shot at picking up extra cash from title sponsor Keyser Mfg.’s lucrative bonus program

Marlar and Ricky Weiss of Headingley, Manitoba, can pick up an extra $10,000 if they can sweep Saturday and Sunday action, while two-race winner Don Shaw of Ham Lake, Minn., still has a shot at $25,000 if he can add two more victories Saturday and Sunday (a third victory would also pay him $10,000).

Saturday’s program is expected to see the Late Model field split into four groups for combined hot laps/time trials followed by four heat races. Four drivers from each heat transfer to the main event with heat winners drawing for the first two rows. Four drivers from each of two consolation races join the field along with, potentially, the winner of the Pro Power Dash for non-qualifiers, who gets the option at $1,000 for a feature starting spot.

USRA-sanctioned modifieds and X-mods are in action for Saturday’s program, which will be followed by Sunday’s finale with a $13,000 payday on the line for Super Late Models.