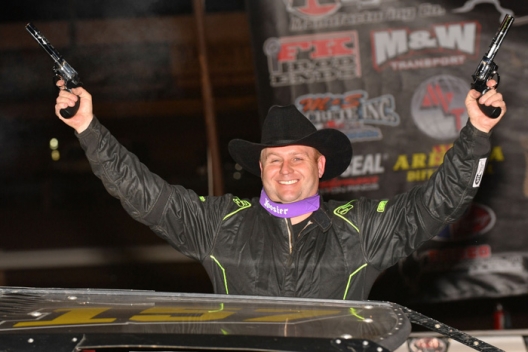 “Ronnie, I’ve finally got this cowboy hat on and got to shoot them guns,” Marlar told pay-per-view cameras after he leading all 30 laps, “so hope you guys enjoyed that.”

The victory lane theatrics — complete with six shooters, a bag of loot and skull trophy — were Marlar’s to enjoy for the first time as he stretched his points lead in the six-race miniseries with a fourth-round triumph.

“We were close there all week long,” said Marlar, who has four top-five finishes. “Little things were keeping us out (of victory lane). Tonight, we had a good car there and got out front and just had clean racetrack. I got by a few little tight spots with some lapped cars, but got through ‘em good. I got the win finally.”

Marlar, who plans to follow the World of Outlaws Craftsman Late Model Series in 2018, kept runner-up Ricky Weiss in check over the second half of the race, briefly getting a two-lapped car cushion with eight laps remaining and taking the checkers nearly seven-tenths of a second ahead of the opening-night winner from Headingley, Manitoba.

Bobby Pierce of Oakwood, Ill., who held the second spot from laps 2-17, scored his third podium finish while polesitter Chris Simpson of Oxford, Iowa, and surprise entrant Earl Pearson Jr. of Jacksonville, Fla., rounded out the top five. Pearson drove Jason Rauen’s car after the Iowa driver was late in flying back to Arizona after a week back home.

Don Shaw of Ham Lake, Minn., who won the previous two events, settled for a 12th-place finish in the caution-free event.

Weiss took a his most serious stab at Marlar with two laps remaining in the 30-lapper, but dealing with slower cars provided his biggest challenges.

“You don’t know how close (competitors) and it’s hard to watch the spotters really,” Marlar said. “I just a took a chance on it there and got in there … once (the slower drivers) saw me, they gave up. Once they knew I was there, so it worked out good.”

Weiss, who wrecked in a feature and in qualifying after winning the opener, was glad to get back on track in his primary car.

“I’ll take it. I can’t thank the guys enough,” said the 29-year-old Weiss, who took the second spot when Pierce slipped up exiting turn four on the 18th lap. “We worked so hard on this car. I pulled the other one out Wednesday night, and what could go wrong went wrong.

“We just didn’t want to bring this car out, knowing how fast it was, we didn’t want to half-ass it, and just get it out here. We just worked hard and got it 100 percent and got Scott’s approval and it’s just as fast as it was the first night.”

Pierce, still looking for his first victory with North Carolina-based Dunn-Benson Motorsports, took a peek under Marlar on the eighth lap but couldn’t get in position to complete a pass for the lead.

“We’re right there,” Pierce said. “We can’t figure out how to keep these tires from blister. Our right-rear has been killed these past two nights, and that’s what bites us at the end.

“If we can get that figured out, the car’s super fast. I think I could’ve possibly cleared Marlar there, but I wasn’t sure. Even then we were a little too snug once the rubber came.”

Notes: RIcky Weiss slipped by Earl Pearson Jr. for a victory in the first heat when Pearson was held up by a lapped car in the final laps. … Ryan Gustin nearly rolled while chasing Mike Marlar in heat-race action; his car went briefly airborne in turn two before slamming back to the surface as he lost several spots. ... Casey Skyberg took a scary, high-speed ride out of the turn-one exit toward the pits in his heat race; he wasn’t injured.

With 46 Late Models in action, the four-heat format will transfer four drivers apiece to the main event with each of two consolation races transferring four drivers apiece. … The Late Model feature is 30 laps. … With two straight victories, Don Shaw of Ham Lake, Minn., is the only driver with a chance at $100,000 from Keyser’s lucrative bonus program. A $25,000 for four victories still stands for Shaw and opening-night winner Ricky Weiss while any driver winning three races can pick up $10,000. … Shaw’s engine shut down winning Wednesday’s race and he believes he found the culprit: he was out of fuel. … Jason Rauen, who flew home to Iowa for the week, is flying back this evening, but if he doesn’t make it to the track in time, Earl Pearson Jr. of Jacksonville, Fla., will drive Rauen's No. 98 Black Diamond Chassis. Pearson, a former World 100 winner and four-time Lucas Oil Series champion, is set to drive the Black Diamond house car for Stuckey Enterprises in 2018. ... Texas driver Rodney Sanders has replaced an engine to race Friday after scratching early in Wednesday's program.