Information provided by: Todd Turner (last updated January 11, 11:24 am)
Shaw makes it two in a row with Arizona victory
Wild West Shootout Round 3 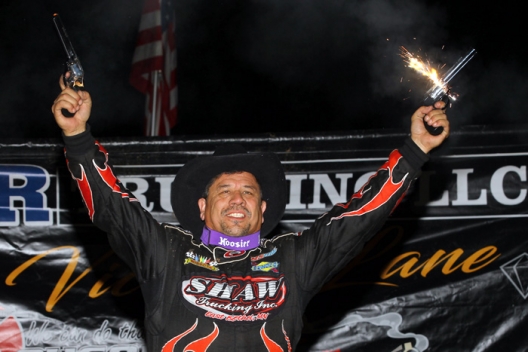 While Shaw was happy to talk about his second straight $5,000 victory — surviving potential trouble after his engine shut down as he took the checkered flag — he simply smiled when asked about a potential bonus.

Inheriting the lead when Cade Dillard wrecked amid traffic, Shaw led the final 19 laps and took the checkers nearly a half-second ahead of sixth-starting Bobby Pierce of Oakwood, Ill., in the third of six miniseries events, winning on a hammer-down surface after topping slick-track conditions Sunday.

“I worked on the car a little bit and got it pretty neutral now. It seems like it’s good both directions here. I gotta a little bit of a break tonight, it looked like (Dillard) wiped out in lapped traffic there, so that definitely helped.”

As for Shaw's engine, “it shut off right when I crossed the flagstand, so I don’t know what happened. Something up in the motor compartment. … Bobby was chomping at the bit probably.”

Illinois had two drivers on the podium as Brandon Sheppard of New Berlin, Ill., improved 10 positions to finish third. Miniseries points leader Mike Marlar of Winfield, Tenn., who held the second spot on lap 20-21 before Pierce went by, was fourth and 11th-starting Chase Junghans of Manhattan, Kan., finished fifth.

Polesitter Chris Simpson of Oxford, Iowa, ended up sixth. He led the first eight laps but got sideways exiting turning two and gave up the lead to Late Model rookie Cade Dillard of Robeline, Pa.

Dillard built a 2.3-second lead in three laps, but his race ended as he crossed under the flagstand on the 12th lap when he tangled with the slower car of Justin Duty. Dillard’s car was sent into a spin heading toward turn one and his demise lifted Shaw into the lead.

Pierce, making his third start for North Carolina-based Dunn-Benson Motorsports, said the aerodynamics of most drivers running the high-side cushion made his car a handful.

“It’s kinda tricky. I was kind of hoping that Don would make a mistake there, but he just kept it smooth the whole time … He did a great job,” Pierce said. “We’ve got three more nights to go and I think we’re getting better and better figuring out this car more. Hopefully one of these nights we can get in that Hoker Trucking victory lane.”

Sheppard posted his third top-five finish of the miniseries.

“I’ve made a few bad calls on setups and stuff, but I think we’re definitely getting a lot better,” Sheppard said. “Tonight the track was a little bit more my style, but I think that even, once it gets slick, you know the few changes we’ve made on it will be a lot better for the slick, too. So I’m really excited to get back at it Friday.”

Besides the caution for Dillard, three other yellows slowed the action between laps 19-25. The race was slowed on lap 19 Billy Franklin slowed in turn two while Austin Theiss spun exiting turn four on lap 21. With five laps remaining, Rob Mayea got into the guardrail to draw a yellow.

Arizona’s final off-day is Thursday with action returning Friday for another $5,000-to-win Super Late Model feature highlighting a three-division program. The miniseries wraps up with a $5,000-to-win event Saturday and the Shaw Trucking-sponsored $13,000-to-win finale on Sunday.

Notes: Ricky Weiss of Headingley, Manitoba, set fast time on his first qualifying lap, but his hit the backstretch wall on his second lap and suffered right-side damage that kept him out of his heat race; he attempted to run the consolation race but broke a driveshaft and wasn’t able to start. … Ryan Gustin started outside the front row of the first consolation race and lost a left-rear wheel on the initial start.

The third of six miniseries events drew 45 Late Models; four drivers from four heats will transfer to the main event with four apiece from each of two consolation races. … Overnight rain, the first in Phoenix in 118 days, left swaths of standing water in the pits and a muddy challenge for crews early in the day. Track workers spent seven hours whipping the pits into shape. … Saturday winner Ricky Weiss was quickest in Tuesday’s practice; he’s running a backup car Wednesallday after wrecking his primary car Sunday. … Jake Davis of Hackett, Ark., ended his miniseries run after Sunday after breaking an engine. … Pat Doar of New Richmond, Wis., is driving the No. 90 Rocket Chassis driven by Lance Matthees over the weekend (Doar owns the car’s powerplant). … Bobby Pierce’s Dunn-Benson Motorsports team installed a Pro Power Racing Engine before Wednesday’s action; the team has traditionally run Larry Wallace engines while Pierce is a long-time Pro Power driver. … After drivers have found it difficult to see signalling crew members in the infield, officials have chalked out a pair of boxes in the infield to provide better positioning. ... Infield lighting failed during hot laps, causing a delay of about a half hour.