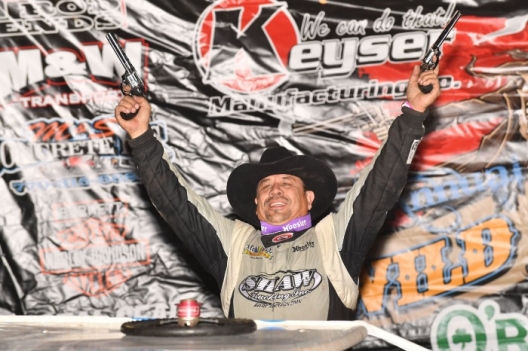 The 54-year-old Shaw, like Saturday’s winner Ricky Weiss of Headingley, Manitoba, a WISSOTA weekly champion from the organization in the upper Midwest, pulled alongside Pierce exiting turn four on lap 36, then slid in front of him in turn two and edged away for what he called the biggest victory of his career.

“I don’t know what to say,” Shaw said in victory lane. “I was watching some of the guys I was passing, and it’s like, ‘I don’t know if they’re off or I’m on,’ but it was good.

“I went out there with a new setup. I just kind of threw a bunch of stuff together and it actually worked good, as you can see. I went out there with old tires and everything, thinking, ‘I’m not going to burn up tires; I’m not going to waste (equipment).’ But then I made a few laps and all the sudden the car started working, and I was like, ‘OK, it’s time to get on it.’

Pierce, 21, settled for second in his second start driving for Dunn-Benson Motorsports. Mike Marlar of Winfield, Tenn., finished third after racing with Shaw and Pierce late in the distance, Ryan Gustin of Marshalltown, Iowa, was fourth in the Gressel Racing machine and Brandon Sheppard of New Berlin, Ill., rounded out the top five in his family-owned No. B5.

Weiss was part of the action up front in the first half of the race and had a back-and-forth, slide-jobbing battle for the lead with Pierce before contact between the two on lap 22 sent Weiss’s car into a tire barrier at the turn-one exit. He wasn’t injured in the wild incident, which he blamed on Pierce in a comment to DirtonDirt.com pit reporter Dustin Jarrett but Pierce called a racing accident.

Chris Simpson of Oxford, Iowa, Saturday’s runner-up and a second-place finisher in four of his last five starts at the track, was running fourth when he abruptly pulled to the infield on lap 24.

Before Shaw was even in the picture, the second miniseries race had plenty of theatrics with Pierce and Weiss mixing it up. Weiss went ahead on laps 11 and 12 as the duo traded slide jobs, then Pierce nosed back into the lead on lap 13 and was out front until Weiss took the point on lap 22, milliseconds before the pair made contact that ended the race for Weiss.

Shaw continued his climb from the seventh row in the second half of the race, and a pair of lap-30 cautions saw him restarting third to set up a battle with Pierce and Marlar. Shaw dispatched Marlar on the final restart and began stalking Pierce, taking the lead off turn four with four laps remaining.

“I really thought I was going to be a third-place car, really, until I started watching some of the guys tailing out a little bit through the corner on the rubber, and I just had to wait a while,” Shaw said. “I like driving the rubber tracks because it’s all about tire conservation and making it last.

“I knew I had a little better tires left at the end than the rest of ‘em, so I felt good with about eight or 10 (laps) to go. I thought I might get it, but again, Bobby, you can never count him out, and he’s driven asphalt before, so he knows what it’s like to conserve tires.

“The car worked so good and it rotated the corners nice. I’ll tell you what, the motor, the motor was singing good. Everything was awesome. I just can’t say enough about everything the way it worked tonight. Some of the breaks I got, but I had to earn most of it.”

“I could hear Don closing in behind me, and I just started pushing a couple of times, and one time I pushed extremely bad, and he had a heckuva run at the time, just being at the right place at the right time," Pierce said. "We’re actually parked next to each other, so it’ll still feel like kind of a celebration in the pit area, I guess — not the one we wanted.”

Besides the red flag to clean up the Weiss wreck, three cautions slowed the action. Cade Dillard of Robeline, La., who started sixth and got up to third early, slowed and rolled to the pits on the ninth lap with brake problems while Scott Ward’s car bounded into the air when he spun in turn two on lap 30. On the lap-30 restart, R.C. Whitwell was in the middle of a turn-two mess that nearly collected Kyle Beard.

Shaw, the reigning WISSOTA champ, and Weiss, a four-time WISSOTA champ, are the only Late Model miniseries drivers eligible for the $100,000 bonus posted for any driver who can win five WWS events. The Keyser-sponsored bonus program also offers $25,000 for a four-feature winner or $10,000 to the first driver to win three features.

Drivers get a two-night break before returning to action Wednesday evening for the third round of miniseries action with another $5,000-to-win Late Model feature. Hot laps are scheduled for 5:30 p.m. MST with racing at 7 p.m.; modifieds and X-mods are on the undercard.

The miniseries concludes with three straight three-division programs Friday through Sunday at the third-mile oval southeast of Phoenix.

Notes: Don Shaw's previous Wild West Shootout victory came Jan. 6, 2013, at Central Arizona Raceway; Shaw's victory at Casa Grande came after Shane Clanton broke while leading on lap 20 and Billy Moyer briefly lost control in turn two, allowing Shaw past. ... Shaw's victory from 13th was the biggest rally in January's Arizona action since Billy Moyer came from 15th for a Jan. 15, 2010, win in Tucson. ... Rebounding from a heat race wreck, Tony Toste of Pismo Beach, Calif., captured the Pro Power Dash for drivers failing to qualify for the feature; he passed up $1,000 to tag the tail of the main event, where he finished 15th. … Bobby Pierce’s team had to swap motors before the main event when his engine dropped a valve exiting turn four during his heat race victory. Moving the engine from his backup car to his primary car lasted until just moments before the main event. … Ricky Thornton Jr. drove Casey Skyberg’s No. 6 after the team’s backup car that Thornton originally was slated to drive was knocked out of action. … Multi-division driver Mike Maresca of Potsdam, N.Y., made his second Super Late Model start in Sunday’s program but failed to make the feature. The 22-year-old had been racing indoors in open-wheel action over the past two weekends, first on dirt in Tulsa, Okla.'s Chili Bowl micro-sprint meet and then on Friday and Saturday in a TQ midget event in Allentown, Pa.

FK Rod Ends Arizona Speedway is set for the second round of the Keyser Manufacturing Wild West Shootout with about 50 Late Models, including Saturday’s opening round winner Ricky Weiss of Headingley, Manitoba, expected to compete.

Weiss, who earned $5,000 when he regained the lead from runner-up Chris Simpson with seven laps remaining in the 40-lapper, is the only driver in contention for the Keyser Quarter-Million Dollar Bonus for a six-race miniseries sweep (bonuses of $100,000 for five victories, $25,000 for four victories and $10,000 for three victories are still in play for everyone).

With 50 entries, Late Models will be split into six groups for time trials with officials employing combination hot-lap/time trials to set the lineups for six heat races. Drivers start straightup by time.

The top three finishers in each of six heat races transfer to the 40-lap main event with the winners redrawing for the first three rows of the feature lineup. Two consolation races will transfer three drivers apiece to complete the 24-car field for the feature, which pays $5,000-to-win.

Sunday's event is the second of six races through Jan. 14 at the third-mile oval southeast of Phoenix.

Correction: Updates throughout with new times.