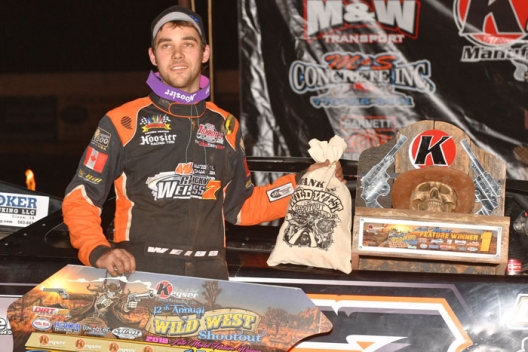 QUEEN CREEK, ‌Ariz. — ‌Polesitter Ricky Weiss led the first 17 laps of Saturday’s Keyser Manufacturing Wild West Shootout opener, but, when a low-running Chris Simpson squeezed under him to take control before halfway, Weiss figured his chances were over.

“I seen (crewman) Cody (Mallory) telling me to get down, get down … then I thought, ‘Well, I gave it up,’ ” the Canadian driver said.

The 21-year-old from Headingley, Manitoba, jumped to the high side late in the race and went back around Oxford, Iowa's Simpson with seven laps remaining for a $5,000 victory at FK Rod Ends Arizona Speedway, his first on the winter miniseries and the richest payday of his career.

Weiss, the four-time WISSOTA champion piloting a new Sweet-Bloomquist Race Car, was nearly at a loss for words after firing the blanks out of a pair of six shooters in victory lane.

“It’s crazy. A brand new car to come out here … Scott (Bloomquist) said, ‘I think you’re going to do awful good,’ but I really didn’t think we’d be up here,” said Weiss, who thanked “everybody that turns a wrench on this car.”

The victory was “just huge (in facing) the best of the best … I mean, Scott’s not here, but we’ve got great drivers and to see the work these guys put in my car and knowing I’ve got what Scott’s got, you can’t ask for better than that.”

Weiss took the checkers eight-tenths of a second ahead of Simpson, who led laps 18-33 but settled for his fourth runner-up finish in his last five Arizona starts going back to last season.

Mike Marlar of Winfield, Tenn., who started fifth and was up to second by the first lap, was third while eighth-starting Brandon Sheppard of New Berlin, Ill., and Garrett Alberson of Las Cruces, N.M., rounded out the top five.

It appeared Simpson was going to put an end to his streak of bridesmaid finishes when he began pulling away midway through the 40-lapper, but when Simpson was trying to lap Chase Junghans, Weiss took notice.

“I seen (Junghans), he moved finally to the top, and I thought, ‘Well, there goes Simpson, he’s going to get by him,' " Weiss said. "And (Junghans) actually pulled away from us, so I thought, 'Well, I saw the flagman (handling his flags) and I thought there’s gotta be less than five laps to go.'

“So I moved up there and I really didn’t think it’d be better, but I thought maybe if the other lapped car held (Simpson) up … and I got up there, and ‘Wow, it’s a lot better up here.’ ”

Simpson jumped into the high groove to chase Weiss with four laps remaining, but by then his preferred inside groove had long given up.

“I just really thought it was going to be around that bottom,” Simpson said. “Me and Ricky fought for that bottom forever, and finally he slipped up once and I got by him. Yeah, I was just out cruising ….

“I’ll take second every day, but it does suck. Leading that many laps like that, and then getting passed. The top just cleaned up. It rubbered up a little at the end and Ricky found it before I did. You know, I was lucky enough to get in front of (Marlar). I had to get up there, that’s what I had to do. All in all a good night.”

Marlar got off to a quick start by zipping into second on the first lap, but, after the race’s lone caution for Tanner Kellick on the second lap, Marlar opted to start on the outside of the double-wide restart.

“I gave Chris the bottom there, because I thought I could momentum (up top) … I was about to roll (by) Ricky anyway, so I took the outside and tried to do that again and it didn’t work,” Marlar said. “But it was an awesome race. And what’s fun, you’re not points-racing, you’re just here to win, so I think that’s why you see guys just doing whatever (even if) you lose a position, whatever.”

The winter miniseries continues Sunday afternoon with another $5,000-to-win Super Late Model program with modifieds and X-mods on the undercard.

Fast qualifier Chris Simpson of Oxford, Iowa, drew the last qualifying spot but zipped to fast time (15.075 seconds) in a Longhorn Chassis. Simpson debuted a new Black Diamond Chassis in Friday’s practice, but after having fuel pressure problems, decided to go with the chassis brand that carried him to three runner-up finishes last year in Arizona. He plans to test the Black Diamond again in Tuesday’s practice. … Terry Phillips of Springfield, Mo., smacked the wall before recording a qualifying lap, causing right-front damage on his new Black Diamond car. … WWS features have been lengthened to 40 laps for 2018; previously the races were 30 laps, and some drivers complained they didn’t have enough time to get to the front. … The track has scheduled a pit concert after Jan. 13 action and promoters are also provided catered food for teams practicing Tuesday night. … The configuration of the track and event is different than last year. The scales have been moved to the infield and cars now exit in turn one and go back around to the mud-drag chute. Last year cars exited to the pits on the highway side of the pits, requiring a crosswalk area for those going from the pits to the grandstands. … David Breazeale of Four Corners, Miss, was driving to Arizona when he realized he might not make it in time for Saturday’s 3:30 p.m. hot laps. He and his wife hopped a plane in Dallas to fly the rest of the way. ... A broken valve forced Ricky Thornton Jr. to scratch from Late Model competition (he was a heat winner in the modifieds).

A busy week of action gets rolling Saturday at Arizona Speedway for the first round of the Keyser Manufacturing Wild West Shootout with 50 Late Models entered on the winter minitour.

The top three finishers in each of six heat races transfer to the 40-lap main event with the winners redrawing for the first three rows of the feature lineup. Three consolation races will transfer two drivers apiece to complete the 24-car field for the feature, which pays $5,000-to-win.