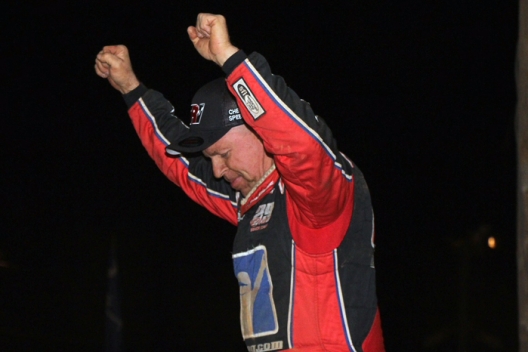 GAFFNEY, S.C. — Darrell Lanigan found himself in plenty of trouble in turns one and two Sunday at Cherokee Speedway.

First, the 47-year-old Clint Bowyer Racing driver nearly got into the outside wall at the outset of his heat race while battling Casey Roberts, leaving him with just a seventh-row starting spot in the 27th annual Blue-Gray 100.

Second, while Lanigan tried to work his way into the top five in the main event, the Union, Ky., driver was part of a multicar wreck that sent his No. 14 iRacing.com machine spinning, presumably out of contention in a race dominated by Chris Madden for the first 71 laps.

But Lanigan, last year’s Blue-Gray winner at the vaunted “Place Your Momma Warned You About,” didn’t give up.

Pitting to change tires, Lanigan made quick work of drivers struggling on original rubber, grabbed second on a lap-72 restart, then overtook Roberts exiting turn four on the 91st lap and cruised the rest of the way for a race-high $15,000 payoff in the Carolina Clash Super Late Model Series finale.

“We had a good piece all night long, just had a bad heat race there,” Lanigan said. “I just got lucky and got to coming in there changing tires (in the feature) at the right time, and it definitely paid off.

“We spun out down there, and I’d been wanting to come in anyway up to that point, so we got in that little wreck, so I thought, ‘It’s time to do it now.’ We came in and put the tires on.’ Like I said, we’ve been coming down here for a lot of years. It’s awesome to win this two years in row.”

Lanigan took the checkers seven-tenths of a second ahead of Roberts, the Toccoa, Ga., driver making his last start with Cushman Motorsports who lead laps 72-90 on the 4/10-mile oval. Brent Larson of Lake Elmo, Minn., was third while Chris Ferguson of Mount Holly, N.C., and Jimmy Owens of Newport, Tenn., rounded out the top five.

Madden, who started on the pole and led virtually unchallenged before a flat tire on lap 71, ended up sixth in the century grind where tire wear and pit stops played a key role.

The runner-up Roberts, who will make his debut for Maryville, Tenn.-based Blount Motorsports next weekend, led 19 laps but couldn’t hold off Lanigan late in the race.

“I sure was wanting to get the win there. We didn’t have a winning car, but we put ourselves in position with the pit stop and all.”

Larson, the first Minnesota starter of the Blue-Gray 100, also found himself in the mix up front to grab a podium finish.

“It was kind of a learning experience for us. We’d never been here before. Actually, I take that back, when I was 16 years old, 24 years ago, I watched a race here and kind of marveled at the racing down South here.

“It was my first night racing on the track here, so I was just learning about the track, learning about the surface, trying to gain some experience. We thought we would have tire troubles, so we decided to pit early and give ourselves a chance to get back up. We kind of tried to set the car up conservatively so we could be easy on tires, but maybe not as fast as we needed to be.”

Zack Mitchell of Enoree, S.C., got into a first-lap scramble, slowed to draw a lap-21 caution and then retired after 65 laps, but his 17th-place finish was good enough to clinch the Carolina Clash championship.

Notes: Lanigan’s only two Carolina Clash victories have come in the last two Blue-Gray 100s. … The feature was slowed by 11 cautions. … Lanigan’s CBR teammate Don O’Neal of Martinsville, Ind., was running fifth when he had a lap-95 flat tire; he ended up eighth. … Roberts dedicated his second-place finish to a friend and race fan, Leon Brown, who recently died. He’s looking forward to his team change but enjoyed his final run for Jim and Ann Cushman. “Thank the good Lord there for blessing me with all these years here racing with Mr. and Mrs. Cushman,” Roberts said. “It’s been a ball. I just wish we could’ve got a one spot better finish there.” … Minnesotan Brent Larson had a laugh in victory lane when the announcer asked him about his first racing experience at Cherokee. “I don’t know if you can tell from my accent, but I’m not from around here,” Larson said with a laugh. … Jay Sessoms, Benji Hicks and Ross Robinson were among other drivers drawing cautions with flat tires. … Robinson, of Georgetown, Del., drove the John Page Racing No. 87 normally fielded by Ross Bailes; he finished ninth. … Bailes finished 15th behind the wheel of the Barry Wright Race Cars house car. ... Trent Ivey won the Crate Late Model race on the undercard; Ivey and other SECA-sanctioned drivers will chase a $10,000 payday at Cherokee on Nov. 25.