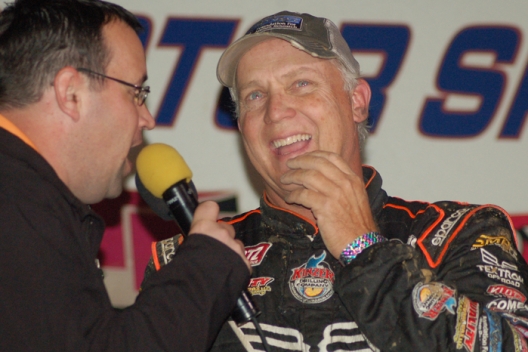 PHENIX CITY, Ala. — The 43rd annual National 100 was more than a race of attrition. It was a weekend of attrition. By the time Dale McDowell swept under the flagstand to wrap up his second career triumph in the late season special event, only six cars remained.

Whittled down from 36 entrants over three days of grueling, mettle-testing competition, the six drivers who managed to cross the finish line were indeed survivors, few of whom left the East Alabama Motor Speedway oval unscathed. Even race winner McDowell had to battle back from an off-track excursion on lap 68 before reclaiming the lead from Scott Bloomquist 16 laps later when Bloomquist was forced to the pits with a failing battery.

“It was a crazy day, crazy evening,” said McDowell. “The race track was actually pretty racey for race fans. It was a little slimy and we went through a lot of tearoffs. First of all thank you guys (fans) for staying and hanging out because if it wasn’t for you guys we wouldn’t be able to do what we do, speaking for all of us (racers).”

But while McDowell, of Chickamauga, Ga., may have inherited the lead — not once, but twice — he earned the victory. Bloomquist made sure of that. After pitting to replace his car’s battery, Bloomquist, of Mooresburg, Tenn., returned to the track in the fifth position, the last car on the lead lap, and doggedly chased McDowell to the finish. His last-lap, last-ditch bid for the lead fell just .145 seconds short — or about the length of his car’s hood.

“I knew it was tough right there at the end,” McDowell said. “All those guys had pitted and I knew Scott and them had pitted. I don’t know if they got new tires. We had a hole in the nose from early and I couldn’t turn. The track officials pushed it down and patched it up best they could, but I just couldn’t turn like I needed to. But I was able to hang on there so it was a good night for us.

“(Car owner and brother) Shane (McDowell) was down there giving me signals and I was losing traction, I couldn’t turn getting in (turn) three, and (turn) one, so it was hurting my exit speed. But Shane was back there giving me signals and told me he was right on me. So I’d just go in low one lap and up one lap and just try to confuse him a little bit. I think obviously he had a little better car. I don’t know if he put tires on or not, I think I was one of the only ones that didn’t pit. But, the good Lord was shining on us tonight. I guess it was our turn, no matter how close it was, we got there. It was our night.”

Dennis Erb Jr. of Carpentersville, Ill., ran as flawless a race as possible, as he was the only driver among the 24 starters who didn’t need to pit for anything beyond a helmet change or a fresh pack of tearoffs. But the 2016 National 100 winner just missed repeating last year’s victory and settled for third. Ross Bailes of Clover, S.C., was fourth and Tim McCreadie of Watertown, N.Y., finished fifth, the only other drivers managing to complete all 100 circuits of a grueling century grind on a treacherous track.

The race was indeed a marathon. The start of the headliner was delayed nearly four hours by persistent, lingering rain that began falling only moments after track officials reworked the surface by opening it up and dousing it with water. What looked to be an exclamation point on a day that included 200 laps of feature racing among six support divisions turned into more of a question mark.

Drivers were presented with a fast but slippery surface and had to adjust likewise. Polesitter Jimmy Owens led the opening lap, but after he and fellow front-row starter McCreadie slipped up the track in turn two, it was Floridians Kyle Bronson of Brandon and Mark Whitener of Middleburg who set the pace.

Whitener led laps six through 14 until giving way to McCreadie on lap 15. McCreadie then set a torrid pace as he led the field for the next 41 laps. But McCreadie’s fortunes turned sour when he hit a rut in turn four, heavily damaging the right front corner of his car’s nosepiece, bumper and fender. Unable to turn when he reached the end of the front straightaway, McCreadie slid to a stop just off the racing surface in turn one.

That handed the lead for the lap-56 restart to McDowell, who had slipped by Bronson just past the halfway mark. McDowell then led the next dozen laps until he found trouble. Slipping high in turn four, McDowell allowed both Bloomquist and Erb Jr. to get by.

When the race’s 11th caution waved on lap 68, only six cars remained in action. Bloomquist appeared to have the race well in hand as he led the next 10 laps. But his bid for a record ninth National 100 victory took a hit when he began to lose power. Unable to keep his momentum up, Bloomquist decided to pit on lap 84, just as Brent Larson exploded a rear tire to bring out the 12th caution.

While track crews cleaned up the pieces of Larson’s ruined Hoosier tire and Bloomquist’s crew worked to change his battery, other drivers took the opportunity to head to the pits as well. At one point during the lap-84 yellow, only two cars — McDowell and Erb — remained on the track.

“The biggest thing was keeping it together for 100 laps, that was the key, and making sure that we finished and didn’t tear up early,” said Erb. “We had a good car. We got up there, battled up in the front there. That last restart I got into the wall a little bit there, but we had a good car … survived it and brought it home third, so it was good. We were able to put it where we wanted to and not push the issue until we had to. We had a couple opportunities to get up there, but we were jus a little short.”

With McDowell assuming the point again Erb gave chase. He couldn’t hold off Bloomquist though. With his car back up to full song, Bloomquist steadily chopped into McDowell’s lead. He finally caught him with four laps remaining. A bid at the lead with two laps to go failed, leaving Bloomquist one more shot. But he was just short and McDowell held on for his second National 100 triumph.

“We just needed that next last lap, that’s it,” said Bloomquist. “(I) just didn’t have very many laps left to get it done. But the car was really good. I think we just might have wanted it a little more, I don’t know. I could run high or low, it didn’t really matter. I knew when we were putting pressure on him and I knew he saw me in the bottom in that end (turns three and four) and then he tried it and it didn’t work so good for him, so he went back up. Again, we could run anywhere on the racetrack tonight. The car was excellent. The engine ran perfect, the car held together. We’ll just have to come back next year and try it again.”

Notes: Track officials decided to scrap the planned consolation race about halfway through the rain delay. … When drivers were reluctant to come help roll the track surface in, track owner Billy Thomas announced that any Late Model driver willing to help seal the track would be granted a starting spot in the feature. That prompted Ahnna Parkhurst and EAMS track champion Dana Eiland to help with the process. Both Parkhurst and Eiland were among the 24 starters, despite their utilizing GM 604 Crate Late Model engines. Eiland made the most of his time on the track, finishing 10th, 53 laps behind, while Parkhurst was a start and park and finished 23rd. … Others who opted to throw in the towel early were Matt Perry, Dalton Cook, Chad Marchman and Jonathan Davenport. … Davenport was scheduled to start fourth in his Donald Bardsher-owned Longhorn, but he decided to tag the rear of the field instead. Davenport said Bradsher had the car’s engine sold and they didn’t want to take a chance on hurting it. He also cited concerns over the lack of EMTs at the track. The emergency personnel apparently left during the lengthy rain delay. … Chris Madden of Gray Court, S.C., was to start 11th, but he loaded up instead. Madden was ill earlier in the day and had been battling a fever. … Along with pitting on lap 84, Bloomquist also pitting on lap 35 when he was involved in a wreck on a restart that also included Ross Bailes and Austin Smith. … Drivers were allowed to stop and swap helmets or get new tearoffs twice. As long as they stayed on the track and a crew member assisted in the swap they were allowed to keep their position. … The race was slowed by 13 cautions. … Drivers eligible to run a consolation race on Sunday but instead scratched or had already left the premises following Saturday’s preliminary program included Jason Hiett, Casey Roberts, Ray Cook, Clint Smith, Shane Clanton, Chase Junghans, Dane Dacus, Joey Coulter, Steven Roberts, Booger Brooks and Mike Nasworthy.

Drivers are on the track lining up for the 100-lap feature. No consolation race was held. Dana Eiland and Ahnna Parkhurst were allowed to tag the tail of the field after helping roll in the track. Chris Madden, who had a fever earlier in the day has decided not to start the feature.

The 43rd annual National 100 has been under rain delay since approximately 6:30 p.m. EST. At 9 p.m., drivers continued to roll the track in, with action expected to begin shortly. East Alabama Motor Speedway officials planned to let 8-10 cars at a time remain on the track in an attempt to whip the surface into racing shape.